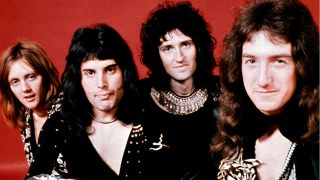 While he may have made his name as frontman for heavy metal band Trivium, listen closely and you’ll realise that the essence of classic rock permeates everything Matt Heafy does. That should come as no surprise when you learn that chief among his musical influences are British rock legends Queen.

“Traditionally when people think about Queen they usually go in two directions – the rock songs or the big ballads,” Heafy tells Classic Rock. “What I wanted to do with this list is pick songs that maybe challenge that. I wanted to go with the stuff that was happier, whimsical, that also showed Freddie’s really diverse, grandiose style. When Freddie wrote, it felt beyond a song to me.”

Below, Heafy chooses the 10 Queen songs that mean the most to him.

10) Bring Back That Leroy Brown

I definitely appreciated the rock Queen songs, but when it came down to the really theatrical, big moments of dramatic songs that had these unorthodox song structures when talking about rock or pop music, I think Freddie showed a whole other side of Queen. Queen’s one of the few bands that has so many distinctively different styles and sonic differences within their own band and records. With Leroy Brown, that fell in the category of something that felt show-tunesy almost. You can tell they’re having fun with the song, and that’s something that we don’t see too much being in a metal band. It’s not that we don’t have fun, but musically, you don’t get to show that side of expressive hilarity.

This one’s doesn’t quite go in the happy theme I wanna go with for Queen musically – it sounds a little bit more sombre at times, but it’s a motivational song. At least it felt that way to me. It has that build, it has that starting off with Freddie and a piano, and I really love that song. It’s one of my favourite songs off News Of The World.

For me, I’m a huge fan of the earlier Queen, and with the Jazz record I felt like they started experimenting more, but with Don’t Stop Me Now it still felt in the realm of old school Queen. It felt like the right balance of musical Queen before they got to that [experimental] era. I really love everything from the beginning to right before Jazz. So Don’t Stop Me Now again has that motivational feel of Spread Your Wings. I think Freddie really soars in this song, and it’s a feel-good song while being empowering. If Queen wrote a hardcore song, lyrically this would be Queen’s hardcore song.

7) Teo Torriatte (Let Us Cling Together)

This is one of my favourite Queen songs of all time – it’s so amazing that in the song they have Japanese lyrics, which is something I didn’t really realise at first. I thought it was a French phrase, then I looked it up and realised it’s Japanese, and there’s Japanese in the song. This one’s a little bit more sombre but again it’s a song about unity, it’s a song about bringing people together. This was one that at my wife and I’s wedding, we wanted this to be the first dance song, but it was too slow. We ended up going with Misfits Saturday Night, but this was the runner up. We love this song.

6) Lazing On A Sunday Afternoon

This goes back to that really whimsical, theatrical side that I really really love of Queen, and I love how they have multiple different signature sounds within themselves. I believe this song has the tap-dancing part – I love the making of A Night At The Opera, and what’s so cool is seeing the making of the way they did that: Freddie just wore thimbles on his finger and played on top of the piano as they recorded it. I thought that was such a cool thing. We got pretty inspired from watching the making of A Night At The Opera, because when we did In Waves, we did things similar to that – there’s an interlude song called Ensnare The Sun where we actually miced up us using a screwdriver and hitting a fire extinguisher, and making really random fake instruments out of crap we found in the studio – we got inspired by that whole scene from A Night At The Opera.

I’ve been asked in interviews that cryptic question: “What song do you want played at your funeral?” As the years progressed my answer became Good Old Fashioned Lover Boy – this is the song that I still want played at my funeral, because it’s happy. It’s something that you imagine the scenery of – I can picture this as a funny Broadway play. This song is one of my absolute favourites of the funnier Freddie Mercury pieces, hence me saying that I want it as my funeral song – and it still will be.

I am noticing this playlist is very happy for me – people typically expect you to pick the darker stuff, but Millionaire Waltz is another one that feels quite happy and uplifting. My favourite two Queen records are definitely A Night At The Opera and A Day At The Races – those are impeccable records, and I think they’re two of the greatest rock records ever. With Millionaire Waltz it follows in suit with the rest of the theme of this list – happy and whimsical. I feel like what I imagine Freddie Mercury’s personality was like shows a lot through this song.

3) The March Of The Black Queen

This is probably the darkest of the songs on Queen II. Now, Queen II I think doesn’t get enough recognition, and what’s really cool about it is that I can hear the roots of melodic death metal, I can hear the roots of bands like Opeth, or power metal bands all on Queen II. A song like the The March Of The Black Queen is very progressive, and if it were played by a Swedish band, you wouldn’t be able to tell it was a Queen song because it would sound so appropriate as a Swedish melodic death metal song. I love the theatrics of the song – it doesn’t have the same theatrics as the rest of the list, but it’s more of the Tolkein-esque inspired music of that era.

Another super-happy song, I guess it’s the same reason I love the rest, and with this one, it’s another one that I want people to check out. If people who are really familiar with Queen’s major hits, this is another one that I think they really need to get to. I always picture Brighton whenever I think of this song. Brighton is really beautiful, and when I think about Seaside Rendezvous, I also picture Brighton.

I have to go with the obvious choice, because this is one of the greatest songs ever written. Not just of rock, but any pieces written – I put it up there alongside some of the biggest classical music pieces ever. Everything that is Queen is in this song: best of the best of the rock moments, best of the best of the classical, theatrical dramatics; it’s got happiness, sadness – everything that you could ever imagine as an emotion within one song happens within this song. It’s a song like Bohemian Rhapsody that inspires me still to this day to always use juxtaposition when writing – to have moments of light and dark, sadness and happiness, intensity and slow-moving compassion. It’s probably the darkest piece on the entire list, and I figured it’s a must. Anyone who doesn’t say this is the best Queen song, or one of the best songs ever, is just trying to be a jerk. It’s one of the greatest pieces of all time.

Every song on Queen's A Night At The Opera, ranked from worst to best