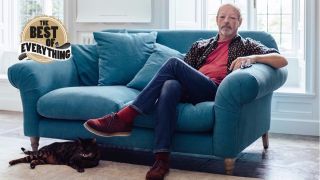 When it comes to making sweet music, Chris Merrick Hughes knows a thing or two. Cutting his teeth as drummer, guitarist and keyboard player for new wave icons Adam & The Ants, Merrick went on to become a forbearer for the post-punk scene, producing many of the genre’s most defining albums, and netting himself a co-write credit on Tears For Fears’ Everybody Wants To Rule The World in the process. In short, Merrick is a man who knows his chops.

As his career progressed, Merrick’s music twisted towards avant garde experimentation, which should come as little surprise when you learn the prog rock movement of the 1970s is chief among his musical influences. Now returning with Eirenic Life, his first solo album in some 23 years, Merrick has unveiled a deeply complex collection of modern classical piano work with longtime muse Steve Reich at its heart.

To celebrate both the new album and his unwavering love for prog rock, Merrick chooses his top prog albums for us below.

“I only saw Egg live once; they played at my school, Emanuel School on the 26 Feb 1972. I became a life long fan that evening. As prog rock bands go, they were quite modest with no blinding light show or capes and costumes, but they did have a dedication to technical skills and a dazzling command of key changes and bewildering time signatures – something I was very into at the time. The organ-driven trio played long instrumental pieces for listening too, with intense concentration – again, something I was very into at the time.

A Visit To Newport Hospital is (for me) without doubt one of the best prog pieces ever written and recorded. I think I read somewhere that the opening and closing fuzz chord progressions were informed by Hendrix’s Purple Haze. Dave Stewart (Organ) also played on Steve Hillage’s album Space Shanty, and was a member of Hatfield And The North – two groups definitely worth a mention here. Some years later, I had the privilege of playing drums on a session with Dave. He played beautifully and effortlessly and was very patient with my ‘trying to keep up’ early drum stylings. My mate and I gave him a lift home in the van.”

“Genesis made many excellent prog albums, Selling England…, The Lamb Lies Down… and Foxtrot to name but three, all having Peter Gabriel firmly at the helm. When I heard Peter had left, I couldn’t imagine how Genesis could continue without him. When Trick Of The Tail came out I was blown away; it seemed so confident, so powerful, so beautiful and so triumphant. Phil Collins at his peak, taking control. His singing, his drumming on Squonk alone is as good as it gets.”

“I was a huge Yes head for a while. I loved The Yes Album and couldn’t wait for their follow up record. Fragile is a masterpiece of classic prog, with a live show which did have dazzling lights, capes and costumes. It also had perfect fantasy lyrics, another prerequisite for top prog. I love the fact that all members of the band get a track of their own to experiment with and then present their findings. The album opener Roundabout and the album closer Heart Of The Sunrise are outstanding tracks. I know other Yes nuts who think Close To The Edge is way better – on occasion I might agree, but not today.”

“I played this album to death. So inventive, so many little bits and pieces to learn. It is overpacked with ideas and pretence, how great! This record journeys, it takes you places, forces you to listen intensely – something I still love doing. If you need a course in prog construction, Supper’s Ready is all you need – preposterous, phenomenal!”

“Another album I played endlessly. Compulsory prog listening. Robert Fripp: visionary, guitar practitioner and leader of a string of excellent groups. This group gave us 21st Century Schizoid Man. It is an album of intense beauty and mellotrons. Similar to Foxtrot, several of the long pieces have sub-divided titles, another classic prog manoeuvre. The album is subtitled An Observation By King Crimson, not just simply An Album By King Crimson. Fabulous pomposity! It’s one of the best prog album sleeves ever, with no title or band name on the front. Very cool.”

“I first heard Volume Two on a John Peel radio show. I couldn’t believe my ears. I rushed out to WHSmith Putney High Street to buy it. Imagine that, ‘Smiths back in the day stocking fairly obscure prog rock. From that day, Robert Wyatt became such an important musician to me. Volume Two is flawed and chaotic, but simply one of my favourite records of all time. Not all my friends liked it, but so what? Maybe check out A Concise British Alphabet, Pt 1. So British, so prog, so concise. It’s not all an easy listen, but that’s half the fun.”

“In the same way some people say Led Zeppelin are not a heavy metal group, some say Pink Floyd are not a prog group. I’m inclined to agree. I regard them as transcendent, pioneers of their own domain and incalculably influential. Having said that, I find A Saucerful Of Secrets charmingly proggy. It’s way less ambitious and sophisticated than Dark Side… or Wish You Were Here, but [it] should be in this list. The track A Saucerful Of Secrets is a proto-prog tour de force, also having its own four sub-divided titles. Careful With That Axe, Eugene – another incredibly important track.”

“I was a great Keith Emerson fan and loved Ars Longa Vita Brevis by The Nice. At the time, I was saddened to hear of their breakup, but thrilled to learn of Emerson’s new project ELP. I know Brain Salad Surgery is regarded as a prog classic – and, indeed, I agree – but the first album holds a magical beauty for me. The synthesiser work on Lucky Man... R.I.P. Keith.”

“Some say this is jazz rock, not prog. Maybe so – I don’t care. [On] Moon In June, Wyatt travels in the right way for me. Out-Bloody-Rageous is also superb. [It has] a classic gatefold album sleeve containing one of the best photos of a band ‘hanging out’ in the history of rock photography.”

“Side one of Close To The Edge has to be one of the best prog pieces on record. I love Bill Bruford’s drumming throughout, I once asked him if he gave drum lessons. He replied, “Why would you want to learn to sound like me?” Good question, Bill. Siberian Khatru is also fantastic – or even progtastic. I know other Yes fanatics who think Fragile is more varied and better for it – on occasion I might agree, but not today…”

Chris Merrick Hughes’ new album, Eirenic Life, is out now via Helium Records. Check out an album preview below