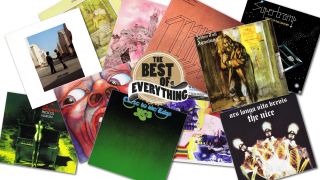 By the time Geoff Downes first joined Yes in 1980 – he left the following year, but later re-joined n 2011 – he already had a successful musical career behind him as a member of The Buggles, co-writing their best-known hit, Video Killed The Radio Star.

Yet prog was his first gateway into music and remains one of his biggest musical loves and inspirations. As the keyboard player of Yes, he’s immersed himself in the scene and the sound that influenced him as a musician more than any other and which also gave birth to many of his favourite bands and albums.

Although not strictly in order of preference, here is his selection of the greatest prog records ever made.

11. PROCOL HARUM – SHINE ON BRIGHTLY (1968)
"This was the first time that I got into listening to a band that had keyboards. Certainly, A Whiter Shade Of Pale was a big influence on me, but I particularly loved this album. It was the first time that keyboards really started getting integrated into rock music. Before, generally speaking, pianos were quite dominant, but I think the fact that they used Hammond organs and keyboards were very much to the fore really appealed to me at that stage. So this album was very important to me."

10. CARAVAN – IN THE LAND OF GREY AND PINK (1971)
"Caravan were one of the first bands I got into seeing live, and again they were very much a keyboard-driven band, and from my standpoint I was very impressed Dave Sinclair and his approach to keyboard playing, which was very melodic Hammond organ stuff. That really inspired me to take up keyboard professionally. I thought he was taking keyboards to a whole new dimension and I really enjoyed that."

9. KING CRIMSON – IN THE COURT OF THE CRIMSON KING (1969)
"I think this was the start of getting some really deep and intelligent lyrics in prog music and it was probably the defining album of that period – not to mention the appeal of its cover, which was pretty groundbreaking at the time. But with the jazz element that came in with 21st Century Schizoid Man it was very inspiring and you can hear that they’re all very, very fine musicians coming together. And it made a huge impression on me because it was the kind of stuff that I wanted to be doing. There had been nothing like that before."

8. THE NICE – ARS LONGA VITA BREVIS (1968)
"Keith Emerson was a big influence on me and I really got into the nice, although I think ELP honed it in to more of a defining style, but I think that Keith Emerson was breaking new ground with his interpretation of classical pieces even then. I was also blown away by the fact that in this rock band he’s take to the front of the stage as keyboard player. He’s probably the greatest exponent of rock keyboard playing and was certainly one of the first people to be a kind of keyboard superstar."

This is probably the most defining album from Yes – certainly from that period – and it was one of the first times that bands really got into concept albums, where the whole side of a vinyl was one piece. That was pretty much unheard of, and in terms of prog music, this is probably the album that defines it all. And certainly when started to play the entire album and I had to learn the entire album, it was amazing to go beneath the cracks and see how everything was put together. There were so many nuances in the music, and I think it took Yes to a whole new level and dimension and really cemented them as one of the great prog bands of all time.

6. GENESIS – SELLING ENGLAND BY THE POUND (1973)
"This is a brilliant album and for me it had everything. It’s full of great composition and great sounds and it’s got terrific production as well. The guitar work on there was extremely versatile, as were Tony Banks’ keyboards. He, too, was breaking new ground in terms of keyboards and really helped turn that kind of music around. The mood of this album is just incredible. I must have listened to it a thousand time, and I always find something new every time. In terms of that particular chapter of Genesis, I think this was the most perfect album they put out."

5. PINK FLOYD – WISH YOU WERE HERE (1975)
"This is a classic album and, to me, a more listenable album than even Dark Side Of The Moon. The moods and the arrangements of the songs, and the way they develop really got me excited. People might say it’s not a defining album, but it’s my personal favourite Pink Floyd album. Syd Barrett came to visit the studio when they were recording and I think the title, Wish You Were Here, is about him."

4. JETHRO TULL – AQUALUNG (1971)
"Again, I just love the feel of this record and I think it’s probably one of their most musical albums of that era. Initially, I think they were more of a prog-pop band – and you’d see them on Top Of The Pops – but they started to move in a more progressive direction and that’s when I got really interested in what they were doing. I think Aqualung kind of sums up that whole era of prog developed from being more poppy – a lot of their early songs are much more concise and here I think they started to extend themselves a bit more. There was a lot of experimentation – not just with studio techniques, but with dark lyrics and just a lot of weird stuff that they were coming up with."

3. THE MOODY BLUES – DAYS OF FUTURE PASSED (1967)
Musically, this is a very strong album because they really went for the concept. In terms of where they stood in the progressive hierarchy, some people might say they’re not quite what you’d define as being a progressive rock band, in the sense of, say, Yes or Pink Floyd or Genesis, but in their early years they had a very experimental side to them, using orchestras and orchestral instruments – obviously, Nights In White Satin features a flute solo in the middle – and a lot of these bands were moving outside of just being a four- or five-piece. The songs are suites on this record and that took it more into the realm of being classical music, rather than a rock band playing eight songs on an album.

2. SOFT MACHINE – THIRD (1970)
"The Canterbury scene was a huge influence on me, because a lot of the bands from there were keyboard-driven bands and it was all happening at the time that I was getting into music. For Soft Machine, experimentation was the key. After Robert Wyatt had his accident, I followed the various members to see where they ended up, and when Wyatt left Soft Machine he founded this band called Matching Mole, which was actually a play on the French for Soft Machine. But it was such a great scene so it must have been amazing to be around at that time. And quite a lot of them used to tour together, so I’d get to see Caravan, Soft Machine and a whole host of bands that were part of that movement. This is one of my favourite albums of the lot.

1. SUPERTRAMP – CRIME OF THE CENTURY (1974)
"I love Supertramp. They’re probably the more pop side of progressive rock music, but I just thought that their lyrics were great and they had terrific production. Ken Scott produced that album and it’s just a terrific record. I don’t think there’s a bad song on it. It’s just full of really great moods, and because there were two lead singers they had really, really good harmonies. And again, they were quite keyboard-driven – Wurlitzer pianos were very much a feature of their music, so they were a very inspirational band for me also."