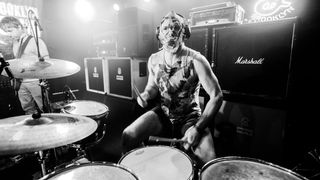 Two members and a whole lot of noise: the similarities between Rhode Island noiseniks Lightning Bolt and their Portland counterparts Wizard Rifle are clear.

Lightning Bolt made a name for themselves back in the early 2000s thanks to their confrontational sonic experiments. A refusal to compromise their vision succinctly sum up the band's ethos – something highlighted by their anarchic live shows, in which the duo generally refuse a stage in favour of the floor, encouraging the audience to gather around them in a sweaty, heaving mess that consistently threatens to spill over into chaos.

Since 2009, Wizard Rifle have been busy carving out a niche of their very own. Combining thrash riffing with proggy, psych-laden interludes, gloomy sludge and good, old-fashioned heavy metal, their music can reasonably be compared to anyone from Exodus to Mike Oldfield depending on where you pick up a track. While their sound may be quite distinct from that laid down by Lightning Bolt, their dedication to pushing boundaries – and themselves – remains the same.

The first track from the second album begins with a truly incomprehensible flurry of notes and an eerie serenity.

Then begins the noise assault: the sound of a band emerging into the world with unbridled energy seeking form and definition, all the while thrust forward by synchronised stabs. We are introduced to the insane psychic connection between the duo who are seemingly deciphering alien frequencies that none else are able to tune in to.

The two-minute drum intro shows off drummer/vocalist Brian Chippendale’s ability to single-handedly propel the arrangement along – as if in the midst of a live set, the amps cut out and bassist Brian Gibson is troubleshooting his rig while Chippendale keeps the party going. Then the bass blasts in with one of the slinkiest, grooviest riffs ever produced by Lightning Bolt. It’s the kind of loop you want to live in forever. Then we fall into some Legend Of Zelda-esque runs – A, B, A, B, noise outro – and this power jammer is over just as soon as it began.

The heaviest, most sinister track of their career, Dracula Mountain is a longtime favourite and one of the gateway tracks to their discography. Trance-inducing serpentine licks lure you in and the repeated breakdown and build structure sends you deeper and deeper into the frenzy.

This track slaps like a dance floor banger at a club in hell. Images of hellions and imps grinding to the demonic riff are conjured through the seemingly endless repetition, the tension building as the notes beat you over the head until you are released with relief into the next riff.

This track swaggers like a backcountry hillbilly in the midst of ecstatic dance after accidentally synthesising LSD into his latest batch of moonshine.

Those who are lucky enough to witness the LB ritual live know that it is something akin to religious experience; audience members congeal into one sweaty, convulsing blob, helplessly tethered to the hypnotising assault of frequencies. They play on the floor, dissolving the separation between concertgoer and band.

Brian Gibson plays out of a truly daunting mountain of rag-tag amp cabs that is guaranteed to shake your bowels. To combat this thunderous menace, Brian Chippendale tunes his drums tight in such a way that they are audible completely even when unmic’ed.

I got to see LB at Rhinoceropolis in Denver many moons ago. I was directly in front of B. Gibson's pedal board, and my task was to try and hold back the masses of sweaty kids – an undulating crowd appearing to be deep in a mass seizure, or an exorcism at some cheesy mega-church.

A photographer sat cross-legged on the floor and wrapped his legs and arms around my leg, as that was his only resort to steady himself and protect his equipment. At one point during the set, our frontline was breached and wayward moshers crashed into the pedalboard and all sound was lost for a moment. I immediately dropped down and started troubleshooting. I found the errant patch chord and plugged it in and we were again overtaken with the orgiastic ecstasy.

B. Chippendale dons a homemade scrap mask, giving his face the appearance of a rejected mister Roger’s Puppet design. God only knows what sort of smells and mould cultures lie within the fabric of this unhallowed garment, especially at the end of weeks of touring, every night no doubt an outpouring of buckets of sweat and spit.

This track feels like the long incline at the start of a roller coaster that never reaches the apex, notes somehow stuck ascending.

Leads in with an AC/DC, Guitar Center-style shred, then transforms into a lumbering colossus plodding step-by-step into a jam band lullaby blasted out of an blown out tin can.

Basically a sludge metal track that goes jarringly into ho-down mode in the most delightful way possible.

Wizard Rifle's new album, Wizard Rifle, will be released on August 30 via Svart Records. Check out single Rocket To Hell below.