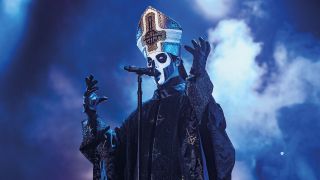 We keep banging on about the best albums to be released in 2017, but there’s more to heavy music than what you hear blasting out your stereo… what about the live environment, the place where bands really shine. There’s nothing like watching your favourite band belt out a flawless set for 60-minutes while you stand arm in arm with your friends, bellowing the chorus out-of-tune like your life depends on it. This year has been an exceptional year for live music, with the biggest bands on the planet lacing up their boots and stepping onto stages across the globe. Sabbath bowed out in Birmingham, Guns N’ Roses made their triumphant return to London, and countless dive bars played host to the next big things in rock and metal.

Here are the ten best live performances we saw in 2017.

Following the breakthrough success of their third album, Rheia, in September 2016, Oathbreaker returned to the UK for a packed-out show. Caro Tanghe’s stunning vocals transmuted from aggressive to ethereal as she worked her way through her most personal set of songs yet, making it feel as though she was singing to each person in the room individually. The Belgians have since announced they’re taking a break; fingers crossed we haven’t seen the last of them.

After surprise-releasing their seventh studio album, The Stage, in October 2016, Avenged Sevenfold brought a full-scale, space-themed production to our arenas. Following solid support slots from In Flames and Disturbed, Rocket Man and Space Oddity came through the speakers before the band took the stage to launch into their title track. From the expansive new songs to a massive floating video cube and a giant astronaut, it was a night to remember from a band at the top of their game.

Black Sabbath being gone from our world is something we’re still getting used to, but it was an aura of celebration over mourning that marked their final show. Birmingham (naturally) was treated to the likes of After Forever, Into The Void and Dirty Women for the very last time, and as Paranoid rained down to bring Sabbath’s career to a close, there were plenty of tears within the cheers.

The most talked-about tour of the year, with support from New Yorkers Car Bomb and the ferocious Code Orange worth the ticket price alone. But by unveiling songs from 2016’s album of the year, Magma, Gojira justified all the praise heaped upon them. The final night of the UK run found band and crowd in perfect unison, from the cerebral celebrations of The Shooting Star to Vacuity’s ominous cavalcade.

Brought back to Roadburn for the second year running – this time at the behest of the guest curator, Baroness’s John Baizley – Amenra weren’t just ordained as standard bearers for a festival given to fearless sonic adventurism; they proved a binding force beyond compare. Packing an expanded main hall, and with guest appearances from Neurosis’s Scott Kelly and John Baizley himself, they bound 3,000 souls into a profoundly physical, soul-searing rite.

Vocalist Colin van Eeckhout remembers: “Roadburn is like one big family reunion. It came rather last minute, so we had to figure out how to top those performances. We always try to aim a little higher than we actually can handle – that’s why I was really thrilled to have John and Scott join us onstage. That was one of those moments that set a mark. We felt like everything was coming together at this exact point. Roadburn has always been a platform for us to prove to the world that we exist, so we have a deep gratitude to Walter [Hoeijmakers, organiser] and the festival.”

After seven years away from Irish shores, Maiden brought the show-stopping Book Of Souls tour to Dublin, and the theatrical spectacular was every bit the triumph we knew it would be. A celebration of the band’s history, their just-as-relevant present, and, indeed, life itself now Bruce is cancer-free, it’s no surprise this show’s version of Wrathchild features on new album _The Book_Of Souls: Live Chapter. Needless to say, we can’t wait for their Legacy Of The Beast dates!

This headline set from Burgerkill gave us goosebumps for a solid hour, Indonesian metal’s biggest hitters on blistering, imperious form. They followed the 10-band Wacken Metal Battle: an enlightening and fulfilling experience at the very heart of Bandung’s metal community, which is all about unity passion, and a commitment to telling the world about their home-grown scene. Battle contestants Trojan also deserve an honourable mention for being fucking amazing.

“We loved headlining the Wacken Metal Battle,” says guitarist Ebenz. “It was a great opportunity for metal bands in Indonesia to show their potential and quality. What I remember most is how the friendship between bands is getting stronger, and people are beginning to realise the importance of international recognition. We have got so many great bands – old pioneers and new bands – and shows like this convince me that the Indonesian scene deserves its place on the global stage. Taking part in Wacken really helps us to build an international network, so events like this are incredibly important for all metalheads in Indonesia.”

More than two decades of nonsense were quickly forgotten as GN’R – featuring not only Slash and Duff back in the fold, but an on-fire Axl Rose – produced a masterclass in how to own a stadium. Three hours were made to feel like 10 minutes, as the LA legends smashed through a flawless set of classics – hell, even the songs plucked from Chinese Democracy sounded absolutely colossal. You really had to see it to believe it.

It was their biggest headlining set to date. And what Ghost lacked in the pyrotechnics of Friday night headliners Amon Amarth, they made up for with a procession of tunes that have gradually turned into anthems, spilling over into the kind of boozy singalongs summer nights were made for – all delivered with Papa E’s darkly seductive demeanour. Who needs fireworks when you’ve got Ritual and Square Hammer in your armoury?

If no one at Midgardsblot’s Viking burial grounds had much forewarning of what was about to hit them, by the end of Heilung’s ornate set a field full of revellers was lost in a singular state of ecstasy as if it was a pagan rave. Bedecked in beaded masks, antlers amidst carved wooden percussion stands, and an army of black-painted warriors bearing shields and spears, their second-ever show was a bewildering shamanic ritual.

“We wanted it to be a binding experience between the performers and the audience,” explains vocalist Christopher Juul. We wanted to respect the people who are there alive, but also the people under the hill. This is very sacred ground; it’s an enormously important place in history. So when we stood on the stage at Midgardsblot, it became something even more. The arrangements of the songs are made for changing your awareness, and all of a sudden this Heilung thing wasn’t just created by us, it was created by the people in front of the stage, too.”

You can read our full 2017 review – including the Top 100 Albums Of The Year – in the latest issue of Metal Hammer. Buy it directly here or become a TeamRock+ member to read it right now.