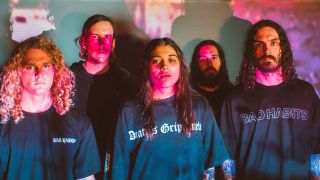 2017 has been a banner year for heavy music. Over the past 12 months we’ve had incredible albums from Mastodon, Code Orange, Myrkur, Employed To Serve, Paradise Lost, While She Sleeps and more. But what about the records that are a bit shorter than the usual full-length, the mini-albums and EPs of the world. Sometimes you don’t need ten tracks and an hour of music to express yourself, often a handful of songs is enough ensnare the senses and ravage your poor feeble mind.

Here, in no particular order, we look at the top five EPs from the world of metal in 2017.

These two opulent album outtakes and delirium-inducing cover of Frankie Goes To Hollywood’s The Power Of Love were a reminder of the redemptive and avant power of 1980s pop that echoed through ages.

An intense display of passion, power and petulance from the Perth hardcore crew. Fearless in its untamed aggression, the second Cycles Of Grief EP (following Growth) turned the hatred and darkness up to maximum.

This anonymous collective are creating some of the most heartfelt music around. Veering from heavy to delicate, taking in tech metal and indie, mysterious frontman Vessel leads you on a secretive journey.

Darker and nastier than Sinsaenum’s already gnarly-as-hell debut album, Ashes confirmed that Joey Jordison is blasting faster and harder than ever. Few bands are hitting the death metal bull’s-eye with this much venomous precision.

You can read the Top 100 Albums Of 2017 in the latest issue of Metal Hammer – on sale now. Buy it directlyhere or become a TeamRock+ member to read it right now.