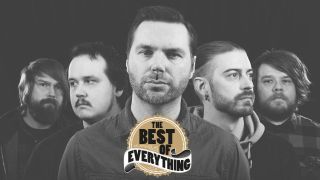 Finland has been no stranger to the world of rock music over the years, but from Eurovision novelty entrants Lordi to symphonic titans Nightwish, it’s generally metal and its various offshoots that have commanded the bulk of the country’s musical praise. But, according to Finnish garage punks Varvara, to discount the rest of the country’s rich rock tapestry is to miss out on some of its finest recorded gems.

So, the band join us below to take us through the greatest Finnish albums we might have missed. Spoiler: there’s no heavy metal. Check out Varvara’s new single, Anxiety, at the bottom of the page.

“The greatest post-metal album ever recorded. Even if it is a bit predictable, it is so perfectly put together that the predictability only makes it better. Each melody feels like a tidal wave of goosebumps and the album sounds amazing. If you like Neurosis and Cult of Luna you have to listen to this record.”

“The second album from this marvellous band. As the first album Yellow was a colourful, happy-go-lucky powerpop album, this one is more mellow and chilled out, with its perfect mixture of a melancholic atmosphere and solid rock songs. Somehow it’s considered the most underrated album that Lemonator made, but to us it is the ultimate soundtrack for being 19 years old.”

“From a production point of view, Pepe Deluxe mastermind Jari Salo is in his own league when it comes to mixing organic band instruments with weird vintage synth/electronic sounds. Queen Of The Wave is filled with captivating soundscapes and catchy pop melodies. The album would work perfectly as a soundtrack to some retro-futuristic sci-fi movie. It is also packed in some of the most beautiful artwork crafted to support the theme of the album.”

“The perfect break-up album by one of the most successful alternative rock bands in Finland. The hard-hitting drums and fuzzy guitars sound like 1998 in the best possible way, while the melodies and lyrics ensure that you’ll keep singing along to them for the rest of the month.”

“The lead singer and guitarist of YUP, Jarkko Martikainen, has the most innovative way of writing lyrics in Finnish. He bends words into a language of his own and it is very intriguing indeed. Normaalien Maihinnousu has the most crooked riffs that lock you in front of your stereo.”

“Penniless have been around for about 30 years now. As pioneers of three guitar action rock, they really sound unique. They’re still going strong – the last two records, A Cab To The City and Rows Of Houses, really stood up compared to their earlier records. Great melodies and genius songwriting. A great live band, too.”

“Insanely talented musicians creating a mixture of psychedelia, groove and pure energy. Kingston Wall only released a trilogy of albums before their singer’s tragic death by suicide. The second of those three albums defined an era in Finnish rock music and still influences new acts that pop up in the Finnish scene today.”

Deep Turtle - There’s A Vomitsprinkler In My Liver River (1994)

“We can’t really put this in any category or genre. Some sort of mixture of jazz and punk rock, with a singer that switches between English and Spanish. Crazy good music if you feel like listening to something completely nuts.”

The second solo album by a behind-the-scenes songwriter in Finnish pop music. The album comes together as one big love song written from a male point of view without it being cheesy or manly. Relatable lyrics and beautiful melodies drenched in britpop guitar sounds.

“Upon its release in 2005, the second Disco Ensemble album was a much needed breath of fresh air among all the goth rock and heavy metal bands in the Finnish music scene. First Aid Kit is a perfect combination of infectious pop melodies and frantic post-hardcore. The album catapulted Disco Ensemble to success, making them a household name in Finnish rock – something that is nearly impossible for an alternative rock band to do in this country.”