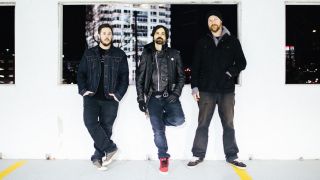 CKY have released a video for their new track Days Of Self Destruction – their first material since 2009.

The song features a guest appearance from Mastodon guitarist Brent Hinds and will be included on CKY’s upcoming album The Phoenix, which will launch on June 16 via eOne Music.

CKY vocalist and guitarist Chad I Ginsburg tells Alternative Press: “We’re older and smarter now. Any of the bad mojo in this band is gone, as well as any of the bad habits we’d developed over the years.

“We all got lost in a bit too much drinking and all types of things, but that’s out of the way now. We got a chance to grow up and we’re happier people. Now, we’re so clear—the music is just flowing directly through us without having to sort through all that bullshit.”

He adds: “We’re so focused. We’ve never had more love for what we’re doing. Being able to play music, our appreciation for it now is just far greater.

“At some point, you think you deserve what you have – you really don’t. We’re very aware of what we do and how lucky we are. That gratitude is just coming through in the vibe of the whole band now.”

The Phoenix is now available for pre-order in a variety of bundle packs. See the cover art and tracklist below.

CKY will head out on tour across the UK from next week.