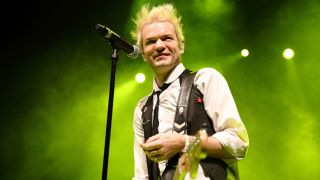 When Sum 41 release their new album 13 Voices on October 7, it’ll mark not only the band’s 15th year, but also Deryck Whibley’s brush with death. Two years ago, the frontman was hospitalised and put in an induced coma as doctors treated him for liver and kidney failure. In the months afterwards, Deryck was almost unable to stand up due to nerve damage in his feet, and tells TeamRock that there were moments he didn’t think he’d manage to make another album.

But here he is, and after a mammoth few months of touring – the band went straight from Warped Tour to a European tour – Deryck sounds happy, healthy and determined to give what some are calling Sum 41’s comeback his all. We caught up with him to talk about how recovery inspired the new record.

A lot of people are calling this your comeback record, Deryck. Do you feel that way about it, or is it just another step in Sum 41’s journey?

“Yeah, I guess so. To me it’s a bit of both. It does feel like the start of a new chapter in the band, but it also just feels like this is what I do – it’s just another record.”

When you were recovering, did you ever doubt you’d manage to make this record? Was it something you were always working towards?

“The record was definitely the goal that pushed me forward, but there were a lot of times, especially at the beginning, that I didn’t know if I’d be able to do it. The physical rehabilitation was really difficult. I was in the hospital for so long, all the muscles in my legs were gone and I had severe nerve damage in my feet, I couldn’t stand on my feet, I couldn’t even touch my feet for the longest time, and the doctors didn’t know if it would ever get better. It was a wait-and-see type of situation. That lasted for a good year, so all I did that whole year was do physical therapy and continued to write songs with the hope that it has to get better. It did, but it took quite a while before I could get on stage again.”

That must have been difficult. So what caused the problems in your legs and feet?

“The nerve damage in my feet was the medication they had to put me on when I went into the hospital that was keeping me alive, but it also causes nerve damage. So that’s what happened in my feet, with the legs it was just muscle atrophy from being a hospital bed and not moving.”

What was the point you realised you needed to seek help?

“I had moments, I guess, before I went into hospital that I felt ‘this probably isn’t the best thing’, but the reality is that you’re so in a fog, you’re not sober ever, so you don’t really have a sober thought that says ‘hey, this is bad, I need to stop this’, the party train just keeps rolling. And once I was sober and in the hospital and I woke up and realised what had happened, then I realised the severity of it all.”

Do you think the drinking and partying culture that often surrounds touring musicians can make it easy to slip into the dangerous territory of addiction?

“For me it was, for some people it’s not, I guess it just depends on the type of person. For me it was just… I like to drink so we all did, I may have been the worst but we were all pretty bad. It just seemed like the norm. It wasn’t that weird to drink all the time. It became one of those things that drinking seemed to help you get through everything like the gruelling schedule, and when you needed energy and didn’t have any, a couple of shots of Jack would get you back up. The problem is you need that every day, then you go home and you don’t even need it any more but you don’t know any other way, so you [drink] every day at home as well.”

How are you keeping away from it now?

“It’s impossible for me to be away from it, but I stay away from it personally. I’m surrounded by it all the time though.”

You’ve been open about the most recent single, War, being a personal account of you confronting your demons. Are there any other tracks that were directly inspired by your recovery?

“The whole record is inspired by the whole process and the whole journey of my recovery. Every record that I ever put out is a snapshot of who I am at that moment in time, so this record I wrote while I was recovering. It’s mostly about my feelings through that process.”

Which songs are the most meaningful to you?

“I guess they all are in their own way. But one that stands out that I like is 13 Voices, the title track. The title represents how I was feeling at certain points. There’s so much chaos in my head of being newly sober, going through recovery and doing everything for the first time, everything felt new and frightening and scary, and there was so much noise in my head of self doubt and insecurity and I was questioning whether I was doing anything correctly. I couldn’t be around people, everything was just really bizarre. I thought I was going crazy and becoming schizophrenic or something. That’s always been a fear of mine, when you see crazy people on the street it’s like, ‘How did they get there?’ Is it possible to all of a sudden become crazy one day, and had I done it to myself? I thought I was losing my mind so that’s what that song is about and what that title represents, all the voices in my head at once, all screaming at one time.”

Were your bandmates supportive during your recovery?

“Yeah, to a certain degree. I wouldn’t really let people in at the beginning. I didn’t want to see anybody, I wanted to recover on my own. So they were supportive as they could be, but, like I said, I didn’t really see too many people.”

It must have been quite cathartic to record 13 Voices. Was there also an element of thinking that other people going through something similar might relate to it?

“No, the outside world didn’t even enter my mind at that point. My sole purpose was recovery, and I didn’t even think about if the song would make the album or not. I was just writing songs.”

It’s great that you’re in a happier place now.

“Yes, now everything’s levelled out, it’s like you’ve finally reached altitude and everything’s cool. Those first two years were really up and down and really crazy and shaky and rocky and really bizarre. Now it feels amazing, I feel very comfortable in my own skin and with who I am now, and I love being out on stage, I love being back playing with the band, and the shows have been going bigger and better than they ever have, and selling out faster than ever. It’s a whole different experience this time of coming back, it feels bigger and better, it’s amazing.”

Sum 41’s 13 Voices will be released on October 7 through Hopeless. The band’s Don’t Call It A Sumback Tour kicks off in Orlando, Florida on October 5.