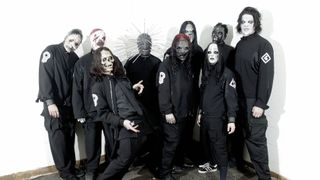 They were told it would never happen, that the world would not listen. But against all the odds, nine misanthropic masked misfits from rural Iowa spat in the face of convention and re-wrote the history of metal. As they prepare to embark upon their latest US tour, continuing an extraordinary journey which has taken them from Des Moines to Donington leaving a trail of broken bodies, broken promises, dead crows and demolished venues in their wake, this is the story of The Nine, a tale of triumph and tragedy, as told through the TeamRock archives…

In 1999, Slipknot unleashed their raging first album. Against all the odds, it’s been certified double platinum. Metal Hammer finds out about the release that changed everything.

Slipknot: Story Behind Their Debut Album

On September 2, 2001, Slipknot topped the US charts with Iowa. The same year, Metal Hammer talked to Corey Taylor about the ideas behind their second full-length release.

After the phenomenal success of Iowa, Slipknot took a break. But where there had once been unity, there was now conflict. Yet they produced something that defied any expectations…

Slipknot: "I would drink from the moment I woke up, until I passed out"

In September 2008, Slipknot scored their first number one album in the US with All Hope Is Gone. Metal Hammer travelled to Des Moines to find a band standing on the edge of the abyss…

Metal Hammer’s Dom Lawson looks back at the legacy of Paul Gray, who passed away in 2010.

Slipknot were dealt a crushing blow with the tragic passing of Paul Gray, but as Clown assured Hammer, they would rise again…

Slipknot: "I've got people drinking, screwing, out of their minds..."

Learn more about the man who calls himself Clown.

In March 2015, Metal Hammer welcomed their new editors: Slipknot. See what happened when they got to grips with working on their first-ever maggotzine.

With each album, Slipknot’s masks have evolved time and time again. Check out this monstrous visual record.

In the 20 chaotic years they’ve existed, Slipknot have thrived on dysfunction. As they prepared to bring hell back to the UK earlier this year, we found them united in passion, but divided by what comes next…

Why Slipknot thrive on dysfunction

Former Slipknot drummer Joey Jordison is on the cover of the latest Metal Hammer. You can read the story behind his split with the band right now on TeamRock+.