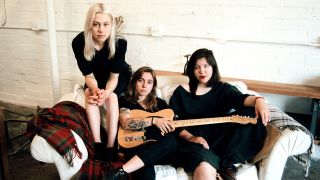 Formed in 2018, boygenius was originally conceived as an act of defiance when Bridgers, Baker and Dacus kept finding themselves lumped together as "women making indie rock" despite their wholly different sounds. The EP that followed was one of 2018's best and most underrated releases, swaying between delicate, shimmering folk and emotionally-gutting indie rock. For the uninitiated, the release of these demos is as good a time as any to acquaint yourselves.

With the demos being released to raise money for three charities, it’s a continuation of activism on Bridgers’ part, who just two weeks ago dropped her second album Punisher a day early, urging her fans to donate to various Black Lives Matter-related causes. “I’m not pushing the record until things go back to “normal” because I don’t think they should," she tweeted. "Here it is a little early. Abolish the police. Hope you like it."

Punisher, a beautiful, complicated album, hasn’t suffered for the lack of promotion from Bridgers – it’s been given mostly five star reviews across the board. Seizing on that success, Bridgers has teamed up with her bandmates to continue raising money for important causes.

The demos will consist of voice memo recordings of Bite The Hand, Me & My Dog and Stay Down. The memos were recorded in rehearsal a day before the group recorded their EP in June 2018, and will remain online in the UK from 8am Friday until 8am Saturday to coincide with Bandcamp’s waiver of revenue share, so that the causes get the full value. Even though they’re demos, it’s a small taste of new music for fans who’ve been anxiously hoping the group will reunite on a new project.

Each member of the band has chosen a different charity which is local and important to them, with Bridgers choosing the Downtown Women’s Center in LA, Baker OUTMemphis, and Dacus the Richmond Mutual Aid Disaster Relief fund.

You can buy the demos here, but hurry: the songs will be taken down after 24 hours.