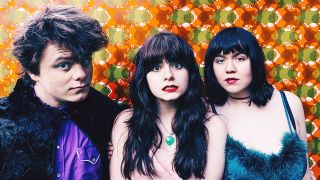 Considering that the combined members of Oklahoma riot grrrl indie punks Skating Polly have an average age of only 20 years old, the fact that they've already collaborated with Veruca Salt, found a mentor in X frontwoman and all-round punk legend Exene Cervenka and recorded five albums (the first when chief songwriter Kelli Mayo was only 11 years old) is pretty impressive stuff. That they've managed to do all this while carving themselves out a definitive sound that's entirely their own makes them downright overachievers.

Here, on the eve of the release of their fifth album, The Make It All Show, the band's songwriters – Mayo and her sister Peyton Bighorse – join us to talk us through the album, one song at a time.

The Make It All Show - Tracklisting

Kelli: "Me and Peyton wrote this riff together and had it for months before knowing what to do with it. On election night, us and our entire family were completely devastated and hysterical. Towards the end of the night, after a long cry fest, I got on our acoustic guitar and told Peyton 'I know what we should use this riff for'. Once we had all the songs on the record mostly written, I knew this one should be the album opener, so we purposefully arranged the song in a way that kinda introduces you to what’s in store on the record. For instance, Peyton taking over lead on the bridge, the crazy screams on polished verses followed by stark minimalistic choruses sang super quiet, and then at the end of the bridge the guitar actually plays a lead that we bring back in Camelot, along with the back up vocals."

Kelli: "The most dismal song I’ve ever written. On the surface it’s about a soldier who would rather live with the shame of leaving her post, or even a life sentence, than deal with all the pressure and commands that come with the 'glory'. I guess on a more personal level it came from a place of feeling like no one was letting me make choices for myself and I was just being yanked into a billion different directions based on what they thought I should be. I dealt with a lot of anxiety last year, along with weird things like passing out, my ears ringing, getting tunnel vision, so there’s some references to that, too. But I was really just writing in dramatised circumstances through a character. That’s my favourite way to vent."

Free Will At Ease

Peyton: "Free Will At Ease is about coming to terms with who someone truly is, and in the process re-learning who you are. I was dealing with someone for most of last year who I thought very highly of, and then it turns out they were going out of their way to hurt me the whole time I knew them. It took me a long time to see what they were doing to me and how it was affecting all my other relationships, including my relationship with myself. Even once I saw what they were doing, I had a hard time accepting it. Now, every time I sing Free Will At Ease, I accept what happened and move past it a little more."

Queen For A Day

Kelli: "Exene (Cervenka, X frontwoman) wrote almost all the lyrics for this one. She sent me a text of the lyrics with a couple emojis sprinkled in and said 'I don’t know if you can do anything with these or if you want to...' They were great. I used every line and didn’t change a thing. We just added some lines for the bridge and pre-choruses. It’s written from the POV of one of the contestants on the 50s game show Queen For A Day. A show all about who can tell the best sob story and exploit their vulnerability well enough to get what they want – so messed up! I was so nervous to play it for her, but we broke it out at the first show of one of our runs with X and she watched from the side of the stage and gave me two big thumbs up the second we finished. She told me afterwards she thinks it’s one of the most punk songs we’ve ever written because it has the traditional punk chorus that just says the title as opposed to some longer melody with several phrases."

Kelli: "A song for cheaters. Honestly I wrote this song from the POV of a wife of a congress man or business man (or maybe president) who’s been sleeping with lots of prostitutes. I guess the message is 'Why would you wanna go to great lengths to have to have this horrible secret when you already have horrible me?' Had a lot of fun with the word play on this one. Was hands down the most fun song to track vocals on."

Peyton: "Long Ride is about shitty friends. People who let you put so much effort into the relationship but never want to do anything in return. People who will go for months without talking to you then one day strike up a conversation like they never left in the first place. And who like to make lots and lots of promises and plans but never intend to follow through. It's about realising you aren't the problem and you don't have to deal with them treating you like you don't matter. It was a really important song for me to write and I was a lot better off after I finally heard myself say how I really felt."

Kelli: "I met one of the most horrible, intolerable, numb-nut, scum of the earth humans last year, who treats women like dog shit using his frat boy etiquette, and this song is dedicated to him. There’s three voices in the song: the voice telling Mr. Frat Boy Lancelot to fuck off, the voice narrating the sad story of who he preys on, and the voice mimicking Mr. Frat Boy Lancelot’s ideal gal and the lengths she would go to be his miserable, underfed, trophy Barbie wife."

Kelli: "Just about several of my dealings with 'showbiz' and LA. Poking fun at the idea of selling out and how out of place I would feel if we did sell out. If we did make it to the inner circle of the 'Hollywood Factory,' so to speak, we’d be the ones still secretly snapping pics of celebrities, never sticking to a diet, playing around with the fancy gadgets and equipment and taking advantage of every free thing."

Kelli: "The premise of this song is being stuck on a never ending 'vacation' that is all work and no play, and keeps you from the work you love and living your real life. I’ve liked a few people who have tried to frame me being on tour as some tragic thing, because I’m being ripped away from them. But it’s just not true, because I love touring. It’s the time of my life and it’s one of the only times I feel like I know who to be and what to do. So I guess the message is watch out for people who tell you to fix what isn’t broken, who tell you you have it harder than you do, and try to make your fun happy place feel like work! It’s so easy to romanticise how hard you have it and talk about 'if onlys'... I’m just kinda sick of it. I wanna feel great about the great things around me. I wanted it to sound like Queens Of The Stone Age. Brad nailed the production on it."

Kelli: "It’s a love song. About being absolutely crazy for someone you don’t have an official relationship with. I get so anxious writing love songs; that’s the scariest territory for me to dip my toe into. I fussed over this song probably more than any other on the record. There are just so many different parts. Originally, I wanted it to feel like a bunch of songs crammed into one, like Band On The Run. I wanted to push my vocal capabilities and I play guitar on it, so I had to make myself learn more guitar to write it. But the hardest thing was the lyrics. I didn’t want them to be cliche or cheesy, but I wanted them to be flowery. I was so embarrassed to show Peyton and Kurtis, because they’re my siblings, you know. I was like 'I don’t want them to make fun of me for a song where the first lyric is about how soft someone’s lips are!'"

Peyton: "I wrote this originally on guitar, then Kelli wrote a sweet little piano composition for it and turned it into a beautifully stark song. All three of us sat down one day and spent a couple hours collaborating on lyrics. I would say it is the most collaborative effort on the album between the three of us. It was one of my favourites to do vocals for because it was so challenging to get it exactly how I wanted it. Sometimes it can be hard to sing so quietly while still sounding like it means something to you but in the end I felt like I did that and I was really proud of it."

The Make It All Show will be released on May 11 via El Camino Media, but you can listen to the whole thing below right now: