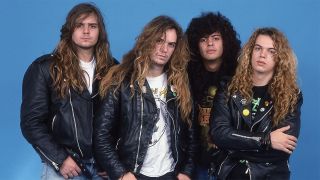 When Sepultura made their debut album, Morbid Visions, in 1986, heavy metal had already begun to take root in Brazil. The country’s military dictatorship had come to an end, and Kiss had played in 1983, followed by Rock In Rio in 1985. It wasn’t all imports, mind; speed-metal act Stress released Brazil’s first metal album in 1982 and a number of cities began fermenting their own scenes.

Sepultura’s home of Belo Horizonte in the southeast was no exception, the thrashtastic offerings of San Francisco’s Bay Area and beyond inspiring a bands to create faster, nastier music that could express their hatred towards a system that had failed them.

Unfortunately, this increasing profile also attracted unwanted attention from the local authorities – “I was more scared of the police than the Devil,” as frontman Max Cavalera put it in a 2016 interview with Hammer.

Still, they persevered, learning their craft in a city few north of the equator would have heard of, playing on equipment that barely functioned, away from metal’s power bases of Europe and North America. And somehow, it worked.

The band’s take on crossover thrash/death metal came to the attention of music journalists including Don Kaye, whose articles on the band caught the eye of the man who would give Sepultura their break.

“Don had this regular column called ‘Deathvine’, where he’d write about bands that were very cool and not getting attention,” explains Monte Conner, who signed Sepultura to Roadrunner.

“He did something on bands from Brazil, with Sepultura being one of the leads there. That was our first taste of the band. Then shortly after, Morbid Visions came out, meaning we were in from day one. But even then, nobody could have predicted what was going to happen.”

As the man responsible for signing Sepultura (as well as fellow legends Type O Negative and Slipknot), you would be forgiven for thinking Monte had Nostradamus levels of prescience for unearthing future metal sensations. But in 1988, neither label nor band even closely resembled the behemoths they would become.

“The biggest band we had at the time was King Diamond, who had just released Abigail,” Monte remembers. “I was the fifth member of staff in Roadrunner US, and a few days after I joined someone quit, giving me the opportunity to start working with bands I’d got into as a college radio DJ.”

Though Sepultura weren’t his first signing, they put his talents to the test. “Max was the only guy in the band who could really speak English at the time,” Monte recalls.

“In fact, the whole time I was communicating with the band during the signing process, it was through a friend of theirs called Lino. In order to speak, they’d go to Lino’s house and we’d talk through him, to go over anything they didn’t understand.”

Max eventually flew out to the US to iron out the final details of the deal. “He got a free Pan Am flight from a friend and came in his best suit – he didn’t want to draw negative attention!” recalls Monte.

Next, they needed a record that could show exactly what this unknown band could do. Scott Burns was still a rookie when he agreed to come onboard as producer. Even so, he had begun to rack up some notable credits in metal’s underground, engineering Death’s Leprosy and producing Obituary’s Slowly We Rot.

“The Obituary guys turned me on to [Sepultura’s second record] Schizophrenia, so I was happy to work on anything,” he says. “[At the time] nobody was really interested; they were too death metal and nobody wanted to work for basically no money in Brazil over Christmas. I was in college, so I didn’t give a crap! It was nice to get away from home.”

Both beautiful and dangerous, the Rio of the late 80s was unlike anything Scott and Sepultura were used to. Scott’s initial experiences illustrate just how deep the rot went. “Roadrunner had given me $500 for food and travel in Brazil. I’d brought along drumheads, amplifiers and everything with me, as I’d heard the band didn’t have much in the way of equipment,” explains Scott.

“It turns out the customs guys were all on the take; they wanted a couple of thousand to take all this stuff in. We ended up arguing with this customs guy for two hours, until he let us in for $300 or so, meaning afterwards we were pretty much broke again.”

Scott and Sepultura worked on the album at night, so as not to interfere with Nas Nuvens studio’s work with Samba acts during the day. This freed time up for them to see the sights and enjoy cheap drinks by the beach, making parts of the trip more The Hangover than City Of God – though Scott did have his room burgled during one beach-crawl.

Nonetheless, Sepultura produced their finest record yet, their sound now matching the band’s talent. “It’s the sound of a great band playing live,” Scott enthuses. “Beneath The Remains captured a moment and said, ‘This is Sepultura’. I’m proud of that.”

“Beneath The Remains is a real thrash record,” Max told us. “I love the way the acoustic, clean guitar opens the title track before Iggor’s toms crash in. From that moment, it’s relentless thrash. Inner Self, Mass Hypnosis, Stronger Than Hate and Sarcastic Existence – those are all thrash metal anthems.”

Beneath The Remains landed them international tours with thrash legends such as Sodom. On Halloween 1989, they played a Roadrunner-curated showcase at the Ritz in New York, headlined by King Diamond with support from Sacred Reich. Sacred Reich’s manager, Gloria Bujnowski (later Cavalera) was in attendance, and had previously turned down Monte’s offer to manage Sepultura.

“I’d been approached a couple times to represent some of the Roadrunner bands that didn’t have a manager,” explains Gloria. “The show started and they were really good, but the very first thought that came into my head was, ‘This band are going to get ripped off’ – I don’t know why!”

Gloria organised some basics to make tour life easier, ranging from towels and water onstage to the kinds of things you’d never expect a band to go without – “They had one pick!” she exclaims.

She clearly left an impression, as Max later wrote to Gloria, expressing his interest in taking her on as manager (“I still have it today,” she declares). The third time of asking turned out to be the charm. “We started talking on the phone; I worked out a deal with them where I’d do a year for free with the band, see if things worked out.”

Still working as Max’s manager some 30 years later, Gloria has steered her husband’s career through its peaks and troughs, and helped the band preach their gospel far and wide. “I was always looking to new places to go; Czechoslovakia, Belgrade.

People would say, ‘Why go there? There’s no scene.’ But the way I saw it, there couldn’t be a scene if we weren’t going anywhere there were potential fans. It got to the point where the label sent us a letter saying we needed to get off the road; Sepultura had been playing for almost two years straight and they wanted a new record… we just laughed and carried on touring!”

While themes of nonconformity, war and alienation weren’t new to thrash, few bands before Sepultura made it all sound so personal. Beneath The Remains also proved to be a stepping stone for one of the greatest runs of albums in metal history, Sepultura climbing higher with 1991’s commercial breakthrough Arise, before redefining their sound on both Chaos A.D. and Roots, as they leant into groove and proto-nu metal stylings. They were also the first metal band that proved you didn’t need to hail from Europe or North America.

“Music is about giving kids hope,” nods Gloria. “We have an ear for kids whose parents don’t understand them; they’ve got to have somebody and I think metal can offer that. Sepultura were one of the first bands to tour Russia after the fall of the Soviet Union, just after the Moscow Peace Festival. It was about giving the kids there a chance to feel the same way kids in America felt; feeling free rather than just seeing oppression.”

Opening the floodgates to metal from around the world had the benefit of helping Roadrunner become a metal household name. “Everything changed once Sepultura broke,” admits Monte. “With both Sepultura and King Diamond, now Roadrunner was a destination for bands. That led to all the successes we enjoyed in the 90s – everything from Type O Negative, Deicide and Life Of Agony all the way to Slipknot and even Nickelback.”

Well, nobody said everything about globalisation had to be good.