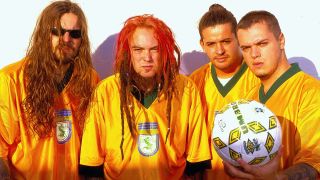 Brazil is a country of extremes. On the one hand it has Rio de Janeiro with its towering statue of Christ The Redeemer, Sugarloaf Mountain and the sun-kissed Copacabana beach, yet away from the tourist spots the country has a murky underbelly, its urban areas blighted by poverty-stricken shanty towns called favelas. The police and politicians are corrupt and glue-sniffing gangs roam the streets.

During the mid-80s, with international phone communication unreliable and an infrastructure favouring the rich minority, Brazil was often dubbed a third world country. The notion of a heavy metal group overcoming cultural, economical and language difficulties to claim international acclaim seemed almost laughable. How wrong we were…

“Where I grew up was as far away from a picture postcard as you could get”, says Max Cavalera of Belo Horizonte, one of Brazil’s less salubrious cities. “I was more scared of the police than the devil himself. For metalheads there was also plenty of violence with skinheads.”

Max and younger brother Igor were part of a family scraping to get by following the unexpected death of their father. Musically, it was rare for rock and metal bands to play in Brazil, and back then the price of foreign imports was prohibitive. Besides which, there was nowhere to buy records in Belo Horizonte.

“We would go to a place called Woodstock in São Paulo that sold cassettes cheaply,” recalls Max fondly. “We’d buy a shitload of those – bands like Kreator, Celtic Frost, Bathory and Exodus. I remember my cousin, who wanted me to be ‘normal’, offering to buy me a copy of Ride The Lightning if I’d cut my hair. I agreed to that – the hair would grow back, right?”

The Cavalera brothers also got off on punk and hardcore music, stewing them together with New Wave Of British Heavy Metal rarities to create their own style of thrash. Max still recalls hearing Venom for the first time. “When we got hold of Welcome To Hell it was so brutal, man,” he enthuses. “Cronos’ voice was deep, dark and evil. We loved Motörhead, but this was a whole other level of heaviness.”

The Cavaleras referenced Motörhead’s own Dancing On Your Grave when naming their own band in 1984, ‘Sepultura’ being Portuguese for ‘grave’. The following year, with a line-up of Max ‘Possessed’ Cavalera on guitar/vocals, Jairo ‘Tormentor’ Guedz handling lead guitar, Paulo ‘Destructor’ Jr on bass and drummer Igor ‘Skullcrusher’ Cavalera, Sepultura signed to record store-turned-label Cogumelo Records for Bestial Devastation, their half of a split album with Overdose. Its lyrics were primitive and the music formulaic, but Cogumelo dispatched the band, still using an English-Portuguese dictionary to write words and scarcely able to tune their guitars, to the studio again for seven more days to record a full-length debut.

Released in late ’86, Morbid Visions offered such vast improvement that Sepultura’s name began to resonate outside of South America. The arrival of new guitarist Andreas Kisser for the following year’s Schizophrenia, also released via Cogumelo, amplified those whispers to a roar.

“Morbid Visions had been more of a death metal record, but with Schizophrenia we made great strides,” Max observes. “Andreas brought us much better musicianship. He could play the Randy Rhoads stuff and all of Kirk Hammett’s solos. Inquisition Symphony [the album’s seven-minute instrumental piece] is an incredible, crazy song.”

With just a flimsy grasp of English and a ticket sourced via the dodgiest of methods, Max flew to New York to meet the various labels, including Combat and Noise Records, to express interest in Schizophrenia.

“I bought a suit, tied back my hair and pretended to be a Pan Am employee,” he smirks at the memory. “When Monte [Conner, then of Roadrunner Records] and Borivoj [Krgin, an early journalistic champion] met me at the airport they roared with laughter.

“Roadrunner were really into the idea of signing Sepultura, though,” Max continues. “Two months later the phone rang. It was Monte and… oh my God… Roadrunner wanted to sign us. They were actually going to send a producer to Brazil to make our next record. It was unbelievable. Of course you hope that these things might happen but never really think that they will.”

And sure enough, although Roadrunner had yet to witness Sepultura onstage, contracts were exchanged. Producer Scott Burns, who had worked with Obituary, Death and Morbid Angel, accepted the challenge of making an album amid trying circumstances.

“Roadrunner were taking a big chance on us, but Monte was confident everything would work out,” comments Max now. “You could also say that we [Sepultura] were taking a chance on them [Roadrunner], but everyone wanted it to succeed. So we took a leap of faith.”

Cavalera rubbishes reports of a translator being required – “I spoke more English than the other guys; just enough to make myself understood to Scott” – but he recalls other obstacles faced by both parties during the creation the quartet’s all-important fourth album.

“The studio was booked during the daytime, so we only recorded from midnight to 7am,” Max winces with a quiet chuckle. “It was crazy but it brought out the best in us. I should probably do something like that again, just to relive the pain.

“On his first day in Rio, Scott Burns went to sleep at the hotel,” he continues. “The following morning, everything in his room had been stolen: clothes and a boombox – all of that shit was gone. “Welcome to Brazil, man!” So we all chipped in and gave him some shirts to wear. But Scott was awesome, he just didn’t care. He’s from a punk rock background and was very relaxed. All that mattered to him was making the best record possible.”

That goal was certainly achieved. Beneath The Remains is an album that now stands as an all-time thrash metal classic.

“Maybe some people would argue for Arise,” Max ponders, referring to Sepultura’s second album for Roadrunner, which really served to gelignite the dam some two years later. “But for me, Beneath The Remains is a real thrash record. I love the way the acoustic, clean guitar opens the title track before Igor’s toms crash in. From that moment it’s relentless thrash. Inner Self, Mass Hypnosis, Stronger Than Hate and Sarcastic Existence – those are all thrash metal anthems.

It’s now more than 20 years old but I still meet a lot of people that want to talk about Beneath The Remains”, Max continues, proudly. “We used to open up our live show with Primitive Future, and of course it has a very cool cover with a red skull by Michael Whelan [the noted US sci-fi artist] that’s extremely iconic. It was definitely a groundbreaking record.”

By the autumn of 1989, Sepultura was the name on the lips of any self-respecting thrasher. However, when Roadrunner brought the band to Europe for the first time it was as a support act to Sodom, a bunch of Germans with a modestly-sized fanbase here in the UK. When the tour hit London for a celebrated show at the Marquee club on October 15 of that year, Sepultura tore the headliners a new arsehole. Your correspondent was lucky enough to have experienced the carnage first hand, but some killer YouTube footage of Inner Self and Escape To The Void filmed from the side of the stage reinforces the crowd’s rabid response.

“That London gig was just amazing,” Cavalera marvels. “We’d dreamt of playing venues like the Marquee, so we were pumped up and kicking ass.”

Although relations between Sodom and Sepultura were fine, Max recalls a dispute with the former’s manager exerting a bizarre side effect.

“This guy really hated us and would fuck with our stage lighting and make sure we had crap sound; whatever he could do to screw us up, he’d do it,” he relates. “Because he liked to stay clean, taking two showers a day, I got back at him by wearing the same clothes and refusing to shower until the tour was over. He wouldn’t go anywhere near my bunk. By the time we got to the Marquee, I hadn’t showered in maybe three weeks. Man, I smelled pretty nasty.”

Max and Andreas opted for post-show beverages. The way Max describes the place, and also because Lemmy was inside playing on the fruit machine, we can only assume that they wandered into the St Moritz club, an infamous music biz watering hole of the era. Max eventually summoned up courage to address his hero.

“When I told him I was from Brazil and that my band had named itself after one of his songs, Lemmy replied: ‘Leave me the fuck alone’, poured his glass of whiskey over my head and continued with the game,” he laughs.

However, Cavalera bears no animosity towards the Motörhead mainman – quite the opposite, in fact.

“I returned to the table in a mixture of shock and ecstasy,” he smiles. “I told Andreas: ‘I’ve just been baptised by Lemmy’. To me it was the most awesome thing ever. It was like a meeting with Jesus; I was in heaven.”

Sepultura would eventually relocate to Arizona in 1990, and just six years later Max shocked the world of metal by walking away from the band after two further immensely successful albums that had seemed set to deliver true international success. Cavalera offers no apologies for the surprising, game-changing amount of diversity of both Chaos AD or Roots – “Throughout my career I’ve learned that if you don’t take chances you don’t get results,” he shrugs, casually – and after reconnecting with sibling Igor in the group Cavalera Conspiracy, also professes no regrets over quitting his former band.

“I really didn’t enjoy how big we [Sepultura] became with Roots – especially in Brazil,” Cavalera reveals. “Being unable to walk to the supermarket made me so uncomfortable that I drank and took drugs. Starting over again in small clubs with Soulfly, I was OK with that. It put me back on the ground again. I actually prefer the smaller shows to the big ones.

“I will always love fast music – it’s been a part of every record I’ve made,” Max continues. “I’ve just sung on a brand new Cavalera Conspiracy record that comes out at the end of this year. It has one really fast song that starts with me saying the word ‘thrash’.” And as for the million-dollar question of a return to Sepultura, so longed-for by so many fans of the band… well, he uses the word ‘probably’, but don’t hold your breath.

“It’s better that we don’t do a reunion,” concludes Cavalera. “We could never be that same band that you saw at the Marquee, looking again for that magic would be a huge mistake. I’m at peace with everything now, but I wasn’t for a number of years.

“So I will probably never try to make a new [Sepultura] record again. And playing live [with them] again? No, let’s save the legend. I’d hate people to leave the venue saying: ‘They were great in 1989 but now they suck’. That would be the worst thing in the world.”