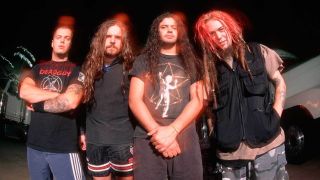 For any band to be celebrate their 30th anniversary is one hell of an achievement, but this year sees the passing of three decades since the formation of one of metal’s most important, surprising and, at the same time, divisive and troubled bands. From the depths of the Brazilian underground to the biggest festival stages across the world, it’s certainly been a trip for Sepultura.

Formed by brothers Max and Igor Cavalera with the intention of bringing their love of early Slayer and Venom to life, the nascent Sepultura gigs were characterised by the sheer ferocity of the band.

“Those early gigs were crazy,” Max tells us today. “The very first gig we played only had two guys with Motörhead shirts on, and they were the only people that liked the band. Everybody else hated us – they thought we were just noise. So we thought we must be doing something right, you’ve got to be getting it right if you piss that many people off!”

The pissing off even included members of their own band, with original vocalist Wagner Lamounier and lead guitarist Jairo Guedz quitting the band early in their career. This left Max to pick up the vocal duties and Andreas Kisser to come in and complete what is, in most people’s eyes, the classic Sepultura line up.

“Jairo was really good,” says Max, “and he was actually a little more advanced than us. He could play Mercyful Fate and solos. The first thing we recorded was Necromancer and Cogumelo Records sent us into the studio to do a demo because they wanted us to record a split with another Brazilian band called Overdose. We did the demo and it turned out really good, really brutal death metal that we were at that time. We were really pleased with it, but Jairo decided he didn’t really want to play that type of music, so he left and Andreas came in.”

Andreas remembers the scene around Brazil at that time in a similar way to Max.

“It was really raw and DIY,” he tells us. “I was in a band that played many times with Sepultura and I always liked them. They were heavy and fast, but I was doing that sort of thing too. We started to get a scene together and the shows got bigger and a little more professional. But, really, all the gear was trashed and broken, and the stages were falling apart, the venues were crumbling. How could I ever have thought that when I joined the band we’d be able to do the things we accomplished?”

But, against all the odds, the unthinkable began to happen and Sepultura began to make waves in the underground.

“We always had those dreams,” says Max, “the Donington and the big stages. We had those dreams, but it was a very slow process. Me and Igor knew that it was going to be our life, we left school to do music and it was do or die. It took a lot of sacrifice.”

Then Roadrunner Records, the hottest metal label on the planet, came calling. Today it’s hard to comprehend just how unbelievable an achievement it is for a band to come from nowhere (as Sepultura did, geographically speaking) and sign with a label so synonymous with quality, big name bands.

“I had a bunch of records that I wanted to get to all the big labels,” Max remembers, “and I had a friend that worked for Pan Am airways who told me he could get me on a return flight to America if I dressed as an employee of the airline. So I thought ‘Fuck it! I have to make this flight!’ and dressed in uniform with my hair tied back, I looked presentable not like a metal head, just so I could go and hand out these copies of our record personally to all the big labels. Combat, Earache, Metal Blade… and Roadrunner was the one that, two months later, contacted us and wanted to sign us.”

It’s at this point that Sepultura embarked on one of the greatest runs of albums in metal history with the rumbling thrash of Beneath The Remains, the white hot death metal of Arise, the grove heavy bludgeon of Chaos AD and the eclectic soundscape of *Roots – *it’s arguable that only the very finest bands of our genre have ever reached such heights.

“We knew we were on incredible form at that point,” Andreas remembers. “Listening back to those albums you can hear a band that are on the top of their game, we were fearless.”

“At that time we never wanted to make the same album twice,” says Max. “I’m always going to be proud of those records and I think we did some amazing things. It’s good to have people who remember that these were great albums and a special time, we worked really hard. Not just the band, but the crew, the management, the label, we went full speed ahead until we broke down.”

And here is where the story turns sour for some. With success after success on record and in the live environment, it’s hard to know just quite what was going on behind the scenes.

“It was starting to become a chore,” Andreas sighs. “We were pushing ourselves so hard that whenever a problem or a discussion came up we could no longer function without a mediator. It was tough, all the successes were great but we were enjoying them as individuals, not as a band. The politics became too much for me to take.”

As so, on 16 December 1996, Sepultura took to the stage of London’s Brixton Academy for the last night of their European tour, with what will now pass into legend as Max Cavalera’s last ever show with Sepultura.

“There was something in the air that night,” Max muses now when asked about the events of that evening. “We played really fast. If you listen back to the recordings of that show you can hear that we just tear through the whole set. It was a chaotic violent night… I don’t know what else to say about it.”

Andreas, on the other hand, does. After one of the most bitter break ups in music history, with much of it being played out in the press, both camps have continued with mixed results.

“It was something that I never wanted to happen,” Andreas shrugs. “But we couldn’t have carried on the way we were. Then suddenly you have the other camp basically telling fans that they have to pick sides, that this guy was going to be pushed as a solo artist and we were stuck on the scrapheap. It happened so quickly, we didn’t even have a replacement singer and this whole new band have come together and have released an album. But I want to tell people that they don’t have to pick sides, the politics is bullshit. We are both making music and you can like both bands. There doesn’t need to be this kind of battle lines drawn.”

With Max out of the picture and straight into his next project Soulfly, Sepultura had to regroup and find his replacement. Derrick Green had insanely huge shoes to fill, but, nearly 20 years on, Andreas is proud of how the remaining members dealt with the loss of their figurehead.

“It was tough for Derrick,” he nods, “but now you see him onstage and he is an incredible frontman. He took the brunt of the criticism and had to learn on the job, but he, and this band, are made of tougher stuff than that. We are survivors.”

Andreas even remembers the moment that he knew that it was going to work out.

“Our first tour was with Slayer and System Of A Down,” he remembers, “that’s not ever going to be easy. Especially for a band that have got to rediscover their identity, and it was a hard tour. Then we left Roadrunner after Nation and everything seemed to be taking a downturn. But slowly we began to find our feet, and by the time we had recorded Roorback in 2003 I was looking at a band that I really believed in again.”

Sepultura V2.0 have continued into the new millennium with mixed results, and with Igor leaving in 2006 to rejoin his brother in Cavalera Conspiracy there are many that question if what we are seeing really is Sepultura at all in 2015. One of the detractors is the man that created the band in the first place.

“I think the reason Sepultura is not thought of in the way as it used to by many is because of what they are doing to the name now,” Max tells us. “It was something that I started, and it was very special. But the name now is being tainted, they haven’t released anything that comes close to those days.”

The counter argument to that is that Andreas sees things totally differently.

“We are still a band making records and playing live,” he says. “Thirty years for a band like ours is a real achievement. I wish people would put their prejudices to one side and come and see this band now because we are in great form! We celebrate and respect our past, but we are still here. This is still Sepultura and it always will be.”

Which is something both men can agree on, and when broached on the subject of a reunion Max is more than a little sceptical.

“I don’t think it will ever happen,” he begins, “and I’m okay with that. I think that the time I was in the band was a moment, a special time, and trying to recreate that now might just let people down. We have the videos on YouTube so people can see how we used to be, and I’m really happy with my career in Soulfly, Cavalera Conspiracy and Killer Be Killed now. So I think it is best that we don’t try and recapture old glories and fail and let people down.”

So there you have it. Whatever side you take, if you take a side at all, it seems that everyone involved in getting Sepultura to their 30th is committed to the future. But on this occasion it’s worth looking back, in case you had forgotten, at the band that were one of metal’s leading lights. A band that broke down the barriers for music outside of metal’s usual strongholds to be heard, a band that changed, evolved and influenced countless other artists within our world, and a band that have made some of the finest heavy metal music that you will ever hear.

Sepultura tour the UK at the following dates: