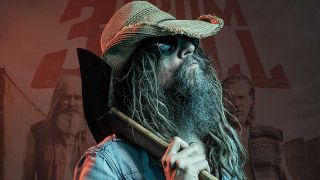 It's been 16 years since we were introduced Rob Zombie's demented Firefly family in his homage to 70s b-movie slashers, House of 1000 Corpses, and 14 trips around the sun since we witnessed their apparent demise in the form of a brutal police shoot out at the end of Devil's Rejects.

But you can't kill pure evil – Michael Myers taught us that – and this month saw the home release of Zombie's highly anticipated third Firefly flick, 3 From Hell.

It seemed almost as though fate stepped in when it came to reuniting Baby Firefly (Sheri Moon Zombie), Otis Driftwood (Bill Moseley) and Captain Spaulding (Sid Haig), with the tragic deterioration of Sid Haig's health, and his ultimate death on September 21 – just five days after the film's official premiere.

With the finale of The Devil's Rejects leaving most of us believing it was the end for the Firefly clan, a third instalment was, understandably, not always on the cards.

"After every film that I've ever made, I never planned to make another sequel," Rob explains. "I didn't plan it after House of 1000 Corpses or after any of them."

But over the years, the metal frontman turned horror movie maestro considered the idea of making the franchise into a trilogy. "As time would go on, the movies and the characters became more and more popular – they were always present in my life. So it was about three years ago that I really made the decision that I was gonna do it. Sit down, write a script and figure it out."

One of the things that inspired him to make the third film was that everybody he needed for the movie was still around. "Everybody looked basically the same," he explains. "You know, and it felt like, oh, this will work. It won't seem awkward!"

"I felt like 'how much time can I wait? I don't wanna wait 20 years... 25 years', you know? So I just I don't know what really inspired me to really just do it at that moment. I just kind of had another urge, yet I couldn't get rid of it."

And it's lucky for fans that he did, as the film ended up being the last movie to star Sid Haig that saw its release during his lifetime.

"When I first had the idea, me, Sid, Bill and Sherri got together for lunch and talked about it. Sid looked the same as ever. You know, he's like 6 foot 4 and he's big and burly. He look like the same guy more or less that was in Devil's Rejects, just a little grayer".

Rob continues: "But then, in the year that it took to get the film set up and get going, that's when, he his health started to decline. I mean it's amazing, in a year's time, of how different he looked."

While preparing to shoot the movie, Rob hadn't heard from Sid – he had failed to shown up for any of his wardrobe fittings. But as the day they were due to start shooting approached, Sid finally called him. The reason he'd missed all those appointments was he had been in the hospital.

"At this point we were supposed to start shooting in like two or three weeks. He started telling me why he was in the hospital and what it was for and what was going on. And, you know, it was really bad. So that's when I went to visit him and saw how radically he had changed since last time I saw him, he looked like he had, you know, lost most of his body weight.

"I mean, he looked like a skeleton and if not for his big beard, I wouldn't have been able to recognise him, that kind of made his face look fuller but he was so painfully thin and lying in a hospital bed.

It was at this point that Rob decided to start rewriting the script, making Sid Haig's part smaller. "I knew that the state that he was in, that it was impossible for him to make an entire movie I just knew it would never happen."

Rob kept rewriting the script every day as it became more and more apparent that Sid's health wasn't improving.

"Finally, when it came to start shooting, Sid's doctor wouldn't clear him. "They were like 'no, he's too sick. He can't do this.' So at that point, the whole project goes into total chaos.

"And that's when I rewrote the whole movie, created the character of Foxy for Richard Brake. Luckily, I was able to get Sid. Lionsgate let me bring him in one day and I shot what I could with him – which wasn't much, but it was enough so he could be in the movie.

"Because you know, it's really weird now. But at the time me and Sid talked about it, he goes: 'This will most likely be the last thing I ever do.' He knew how sick he was. And it was. Which is really strange."

Despite the film not panning out the way Zombie had originally intended, and the heartbreak he must have faced while trying to salvage the film, he remains positive with how it turned out.

Zombie believes that what really makes a great horror doesn't come down to the storyline – in fact, he contends most horror movies are "situational" rather than narrative-driven.

"The number one thing that, for me, that always draws me to a movie and keeps me coming back are the characters," he says.

And it's the characters, and their chemistry that really make Zombie's films so iconic. Sheri Moon's demented siren, Baby, really is the ultimate hillbilly femme fatale, Bill Moseley's Otis could give Leatherface a run for his money, Sid Haig's Captain Spaulding is like Pennywise on crack and Richard Brake's Foxy somehow fit right in, as if he'd been hiding in the hills ready to crawl on out and join his inbred family all along.

"Once you get over the scare factors, oh, you know, something is going to jump out here or this bloody effect. That's for shock value the first time around," Rob explains.

"But for me, what makes things important is like, are these characters interesting? Can you watch them do almost nothing and it's just as interesting as the rest of the movie? That's what I care about."

And Zombie even ensures his minor characters are just as well-rounded and interesting as his leads. One particular character who stands out in 3 From Hell, despite having very little screen time, is the feisty prison warden who is put in charge of Baby – Greta – played by scream queen, Dee Wallace, who earned herself the title due to her starring roles in seminar horror films like The Hills Have Eyes, Cujo and Critters.

And thanks to Zombie's focus on character (particularly on the villainous Firefly clan) his three flicks, while appearing to fit within the slasher genre on first look, don't really fit into any traditional horror subgenre.

As the master himself tells it: "House of 1000 Corpses was a really kind of over the top kind of wacky haunted house movie with monsters, in a way. And then the second movie [Devil's Rejects] became a very sort of violent serial killers on the run.

"And this one... [3 From Hell] I keep morphing them so they're different. I don't want to just keep doing the same thing. I mean, this one, by the end of the movie, you're like 'What am I watching? An Italian Western. What is this?'

"You know, I find that interesting to keep you. I don't want to just keep doing the same thing over and over and just, you know, that's why it's not House Of 1000 Corpses part two or part three. I love the characters, but I want to reinvent the way we present them each time. So it's fresh."

And you never know, there could be more from those dreaded Fireflys in the future, but we aren't holding our breath.

"It was very fortunate that, you know, the addition of Richard Brake – he really fit in well. He didn't seem like a weak replacement because I wasn't trying to have him be the new Captain Spaulding. I wanted him to be something completely different," Rob explains.

"He fits in great and the three of them together have just as much chemistry as the original three. So, yeah, they could easily do more because they work really well together, but I don't have any plans for that."

Rob Zombie's latest tale of terror, the horror-slasher-Italian western 3 From Hell is out now on DVD and Blu-Ray.

Rob Zombie's 3 From Hell on DVD and Blu-Ray
First there was House of 1000 Corpses. Then there was The Devil's Rejects. Now, from writer/director Rob Zombie, comes the next blood-soaked chapter in the most violent crime saga in history... 3 From Hell.
Extras:
To Hell and Back: The Making of 3 From Hell Audio Commentary with Writer / Director Rob ZombieView Deal