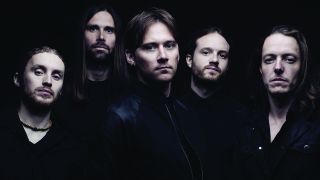 HOW MUCH DOES TECHNOLOGY RULE YOUR WORLD AS A LIVE BAND?

**James Monteith [guitar]: **“We are slaves to the machines. We’re completely dependent on technology for the show to work. Early on in our career, Amos pulled the soundcard cable out of the computer which instantly killed everything. We stood onstage looking like lemons for two minutes waiting for the computer to restart, and to make things worse, the Windows start up sound then boomed out of the PA!”

Who’d win in a nerd-off between you and Periphery?

“I have no idea! As nerds we fear confrontation. I think they have more wearers of glasses, though, so they might win on that front.”

Do you have anything special planned for the forthcoming UK tour?

“It’ll be an all-encompassing audio-visual experience of power and atmosphere that will transcend your soul into the fourth dimension, followed by our own personal tour of the local kebab shops.”

Is [vocalist] Dan Tompkins definitely staying? Or do you have a spare singer hidden somewhere, just in case?

“Dan is definitely here to stay. We’ve actually cloned Dan and we have two spares in cryostasis in my shed. Admittedly running a giant human-sized freezer is not great for my electricity bill, but we’re safe in the knowledge that should he spontaneously combust, we can thaw a new Dan out in about 24 hours.”

You’re very tall. Acle [guitar] isn’t. Does he have to ask you to get things from high shelves for him?

“No, Acle has the ability to manipulate space-time, so if he wants to grab the sandwich toaster out of a top cupboard, he’ll create a mini wormhole from wherever he is, reach in, and grab it. It’s especially useful when we all go to the park and the band’s Frisbee gets stuck in a tree.”