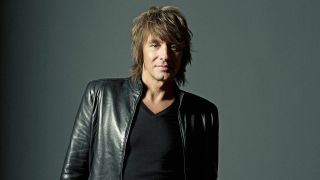 There’s laughter, music and chatter in the background at Richie Sambora’s San Fernando Valley house. The former Bon Jovi guitarist switches phones as a pair of heels – presumably those of his daughter Ava or his Australian partner and fellow guitarist Orianthi – click‑clack across the floor.

“Gimme a second, man,” mumbles Richie. He’s a busy man: in October, Sambora and Orianthi tour the UK, opening for Bad Company, on November 11 they play the Classic Rock Awards in Tokyo. The couple also have a new album in the works, and Sambora is producing a documentary about blues pioneer Robert Johnson. “What can I say?” he laughs. “I’m a prolific kinda guy.”

How are things going with your new album?

It’ll be out next year. We wrote seventy songs for this record but we’ve got them down to twenty-two. Now we’ve added [Bon Jovi/Metallica producer] Bob Rock, and that’s made it a whole different animal. There are some fucking great songs here. There are guitars everywhere on some of them and hardly any on others. It will surprise people.

What’s it like when your partner is also a guitarist?

Listen, it’s fantastic… but it’s also a pain in the ass. Here’s the thing, though, we play a lot alike. Ori is widely known because of the technical aspects of her playing with Michael [Jackson] and Alice [Cooper], but she can really lay it down, man. Not just that flash-in-the pan shit.

You tweeted Jon Bon Jovi recently, congratulating him on the group’s new single, This House Is Not For Sale. Are you two talking again?

Jon and I are cool. There’s no malice, no weirdness. We text. We were going to meet up a couple of months ago when he was in town… but it didn’t happen. I wish him the best. Good luck. Thirty-seven years together? Shit, that’s a good run. I just wanna say to everybody, “Come on, there ain’t no problem.”

Doesn’t it feel strange, though, seeing that other guy in Bon Jovi, Phil X, playing your solos?

No [long pause]. Really. Cos I’m not paying attention. I’m not watching, because I’m working on my stuff and having the life I didn’t have in Bon Jovi. Seriously, I’m not trying to be humble, but I’m glad somebody else is playing those songs.

What happened there with you and Bon Jovi?

I needed a break to freshen up and get a sense of renewal. All we did was work our butts off. The last tour I did with them was eighteen-and-a-half months, the one before was sixteen-and-a-half. It leaves you in the lurch with your life. I just said: “Hey, time to take the reins.”

You just needed a break?

Yeah. We were never a band like the Rolling Stones or U2. Those guys take years off between tours. We never took nothing off. We worked sixty years in thirty years compared to what other people did. That’s okay, because it was so big and we were following it. But not now.

Could you see yourself playing with them again?

Yeah. Why not? Like I said, there ain’t no malice. But there are directions Jon wants to go in, and I’m doing this. I just want to make this new thing the best I can. People are still coming to see me because they know I’m going to throw down my heart and soul on stage, like I always did.

Was it an instant thing with you and Orianthi?

Ha! We clicked in a musical sense when we met on stage [New Year’s Eve 2013, in Hawaii] playing with Alice Cooper and Sammy Hagar for charity. We had a musical dialogue first.

And then it became romantic?

As fate would have it, I booked a tour of Australia but my rhythm guitarist’s mom got sick and he had to go home. At first I thought I’d do it all myself, but then I thought, “How about if I call Ori?” Together we destroyed it on stage – and now it’s turned personal.

Is it true you two have a recording studio in your kitchen?

Yeah. But I have a big kitchen.

Who was the first guitarist who really made an impression on you?

Jimi Hendrix. It was the inspirational freedom he had. You knew that what you were hearing Hendrix play one night was different from what he’d played the night before. That was so intriguing to me – to be able to express yourself on an instrument and go out there and lose yourself.

Which other guitar players inspire you these days?

Man, there are so many. Let me tell you who will surprise you, though: Robby Krieger from The Doors. People do not know how good he is. I just saw him with Buddy Guy and Jeff Beck at the Hollywood Bowl. He was insane. He laid some shit down.

You were never one for those really widdly-widdly, finger-tapping, eighties-era guitar solos, were you?

No. I was the guy trying to stick the blues into pop music. And I stuck it in there as much as I could [laughs]. Listen, solos and riffs are great, but there’s got to be a song to go with it.

So you’re a bluesman at heart?

I’m a blues geek. And I’m still discovering new stuff. [Lyricist] Bernie Taupin, who I’ve worked with, has the most vast collection of American roots vinyl I’ve come across. He has a show on this wonderful satellite station, SiriusXM, and he knows when there’s a good song happening. He’s played me shit I’ve never heard before.

Every Song On Bon Jovi's Slippery When Wet, Ranked From Worst To Best