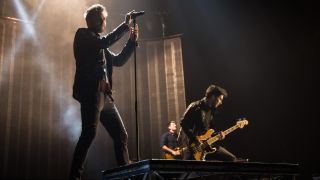 Having scored their first UK number one album in January of this year, You Me At Six were in celebratory mood as they brought their Cavalier Youth tour to Ally Pally on April 5. Here's five things we learnt as we watched the chart toppers at one of London's most historic venues...

TONIGHT’S SUPPORT BAND ARE ON THE UP…

Don Broco’s star is clearly on the rise. The reaction that meets the Bedford quartet tonight is worthy of a headline slot, and when you consider it has been nearly two years since they released their full length debut Priorities, the explosion of excitement they induce is all the more impressive. It is easy to see why people are so enthused by them; frontman Rob Damiani and his mates leap about the Palace’s stage with reckless joy in their eyes and unswerving belief in their hearts. Proof that people will always fall for a band that give it everything they’ve got.

…AND THE KEY TO THEIR SUCCESS LIES OUTSIDE TRADITIONAL ROCK SPHERES

‘Broco are not a band who will just appeal to rock fans. In fact, the more hardened of our ranks will look at their clean cut good looks and neat hair and dismiss them out of hand. The reality is that this is music that will draw in the sort of people who go to T4 on the beach and holiday in Magaluf. Damiani’s butter-smooth croon lays a sophisticated pop depth on top of choppy instrumental groove and flow tonight, but it is the knowing glint in the eye of their trademark ‘Broco walk’ dance move that gives the real indication of where this band’s future lies.

YOU ME AT SIX ARE BACK AND AS SLICK AS EVER

The start of 2014 was an interesting time for You Me At Six. Having been away for three years there might have been some concerns as to how their new album Cavalier Youth would be received. If that record going to number one didn’t crush those doubts then the screams of delight that back tonight’s opener Too Young To Feel This Old comprehensively reveal that people still really, really love this band. YMA6 have been doing this for their whole adult lives (and some of their childhoods too) so it should be no surprise that they are a well oiled machine, but tonight they are so ruthlessly professional that it is almost scary.

Believe it or not, YMA6 have been going for ten years. Ten years. What that means is that this venue is packed with kids who have grown up listening to their music - and there is no more powerful tool in a band’s armoury than the gravitas of familiarity. Their ability to unite both suburban kings and queens with perfect skin and well attended Instagram accounts and the gawky, weird teenagers who will end up forming the great bands of the future make them a rare and special proposition. There is an older crowd here too - admittedly further towards the back of the room but in the flickering half light of YMA6’s enormous LED screen backdrop you can see them. And they are mouthing along to every single word.

While Cavalier Youth clearly saw YMA6 trying to turn towards more ‘grown up’ fare, it is the pump and thrust of their harder rocking tunes that really works best this evening. Underdog is a full bore highlight and you can feel the floor physically moving from the pogoing that’s going on during an encore rendition of Reckless. That being said, there’s no Save It For The Bedroom, no Finders Keepers, no Kiss And Tell and the set does amble into a bit of mid-paced mire for their absence. For the most part though, this is sharp, precise superbly executed stuff a truly impressive spectacle.