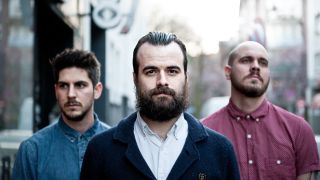 The sun is beginning to peep its head from behind the clouds and summer feels like it is just around the corner. What better time then to get into a dimly lit, sweaty venue and check out math-y alt rockers Arcane Roots? Here's five things we learnt when we perspired along with them at The Garage.

While the ‘Boy Does Thing’ line of band names has been flogged to complete and utter death, this Geordie quartet have the components required to set themselves apart firmly in place. That’s not to say their influences aren’t clearly distinguishable though, with hints of Brand New, Foo Fighters and even Hundred Reasons bubbling insistently to the fore. It’s a heady mix and certainly not an unpleasant one as the band knock out a solid set with obvious enthusiasm – drummer Gav Gates in particular pulling out the sort of gurning grins that only the sheer ecstasy of music can induce. Boys Done Good.

The heavy prog oeuvre of Empress has been touted as something special for a while now and if nothing else they clearly have a wide reaching blueprint for what they are seeking to achieve. With songs that rapidly climb and spiral in to vast, twisting knots and then simmer down into dusky, Eastern influenced plateaus they impose a decidedly meditative, almost classical quality onto their compositions. There are flashes of greatness here, but also some notable shortcomings. Most noticeably, Ollie Loring’s clean vocals just aren’t up to the task tonight and sections that should be triumphant exercises in melody are left to flap in the wind somewhat. His coarse roar is delicious though and instrumentally they obviously have a surfeit of ideas in their locker. You fancy that they will improve considerably over time.

YES, ARCANE ROOTS DO REMIND YOU OF BIFFY CLYRO

Three piece? Check. Frontman with a big beard? Check. Stratocaster worn at nipple height? Check. A penchant for flowery shirts? Check. A veritable sack full of jaggy snake riffs? Double check. It’s no real surprise that Arcane Roots have drawn comparisons to everyone’s favourite Scottish festival headliners but they are so much more than just insipid copycats. Crashing out of the gates with a sterling rendition of Over & Over, they set their stall out from the get go as a band with a personality all of their own.

ANDREW GROVES IS AN EXCELLENT MUSICIAN

In a trio there is no room for passengers. You can’t hide behind a hurricane of effects-festooned rhythm guitar and hope that no one will notice you idly noodling away. This is especially the case when you are responsible for vocal duties as well and tonight Andrew Groves excels in both departments. As nimble over the frets as he is dexterous with his voicebox he also, somehow, manages to cover every inch of the stage in a whirlwind of frenzied passion. Pirouetting off monitors and launching into frenetic, syncopated riffs seemingly on a whim, he is an utterly mesmerising performer.

Having started in explosive fashion, Arcane Roots play for a full 90 minutes tonight. You can do a lot in 90 minutes – watch a World Cup final, enjoy one complete orbit of the International Space Station or even listen to Reign in Blood three times and still have change. Unfortunately for the band it feels as though they draw proceedings out for a little too long tonight. Indeed, by the time Groves steps forward to lay down some atmospheric finger-tap guitar as an intro to Resolve, the sound of a restless crowd chatting away to each other is a distracting backdrop. An excellent show that would have been even better had it been 20 minutes shorter.