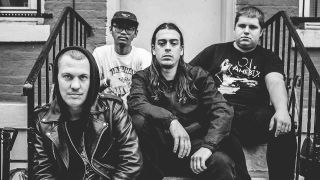 Some genres are just meant to work together. Thrash and hardcore have been bedfellows for decades, and their link remains stronger than ever – just take a look at the current crop of US bands like Power Trip, High Command and Enforced who are spearheading the genres’ revival.

With their tasty cocktail of old-school hardcore meets thrash, Washington D.C.’s Red Death are cemented in this movement. It’s a concoction we’ve seen time and time again, because it tastes oh so sweet.

“I’ve been listening to punk since I was 11; I still listen to the same bands! Metal, I got into that as I’ve gotten older but it’s just relevant to my interests,” vocalist/bassist Chad Troncale tells Hammer of the reasoning behind their musical blend. “Both genres have done a good part in representing the time frame, like what’s going on with the government, what’s going on the world. Both genres of music are good for that, so why not mix them together?”

Their take on mixing hardcore with thrash is a match made in heaven. One listen to their latest outing, Sickness Divine, and you’ll see that Red Death are taking no prisoners. It feels dangerous, something that had been missing in thrash for some time.

“Thrash feels dangerous again, which is good because that’s what rock’n’roll is supposed to be. I didn’t get into metal when I was a kid because I thought it was goofy. But a band like Power Trip, they’ve opened the door for us to do this thing. It’s good to have a danger element in your riffage!”