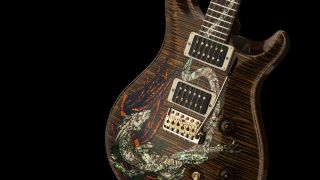 In 1985, Paul Reed Smith and his team, working out of a modest shop in Annapolis, Maryland, produced 20 guitars to show at that year’s NAMM industry shindig.

Three decades on, PRS Guitars have grown into a major name, with a reputation to rival that of Fender, Gibson et al. And to celebrate their 30th anniversary this year, the company have produced a number of commemorative models. All of those, however, pale into insignificance when compared to the jaw-dropping majesty of the Private Stock 30th Anniversary Dragon.

This example is finished in ‘tiger eye’, and the list of woods used reads like a furniture maker’s wet dream: a Madagascan rosewood fingerboard, a body composed of African ribbon mahogany and the highest grade of curly maple, and even the tuners have rosewood buttons.

Using their go-to Custom 24 guitar as a base, PRS approached noted Dungeons & Dragons artist Jeff Easley to design the body inlay. The decoration itself comprises more than 285 pieces and includes lapis lazuli, green jade, pyrite and gorgeous copper-blue azurite, alongside a veritable molluscs’ graveyard of abalone and mother-of-pearl.

Like many guitar builders, Smith has long pursued the tonal Holy Grail of the original 1950s PAF pickup, and the 85⁄15 humbuckers fitted here are, he feels, the closest yet. We’re not sure we’d have the balls to actually play the 30th Anniversary Dragon without being swathed in protective bubble wrap but, with a Sweet Switch push/pull tone pot upping the tonal versatility, it’s going to sound as good as it looks.

Hold that bile, though, as this isn’t even the most expensive guitar PRS have ever produced. That would be the double-neck Dragon produced in 2005, sporting an inlay that, believe it or not, included pieces of fossilised mammoth ivory, which sold for £33,449. Go on then, we’ll take two.

LIVING THE DREAM: Mark Tremonti and his unique PRS

Every player has an idea of which guitar they would have if money was no object. When Alter Bridge mainman Mark Tremonti (pictured) felt the urge for something new he got in touch with British artist Joe Fenton, and commissioned some unique artwork to be applied on one of his signature PRS models.

Fenton, who works largely in monochrome, took inspiration from some of Tremonti’s own ideas and came up with a stunning, if somewhat unsettling, design that incorporates, among many other things, a lurking skeletal Buddha, spooky parapets and an eyeball or two.

Tremonti is pictured here with the guitar at 2014’s Rock On The Range festival in the US, just moments after being presented with the finished article. “I’m just blown away by this beautiful guitar,” he told Guitar World. “Joe Fenton knocked it out of the park and PRS more than delivered with this one.” And we agree.