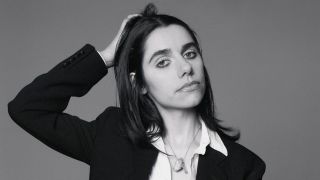 It’s no exaggeration to describe PJ Harvey as a national treasure. Throughout her 27-year career she has consistently pushed her artistic boundaries to ever-greater critical acclaim, her mission to never repeat herself taking in raw punk blues to mainstream alternative rock to cinematic ambient experimentation, and the results are never less than fascinating.

In fact, she is so ingrained as one of the UK’s leading creative lights, she was awarded the MBE for services to music in 2013 – a status she achieved in the most uncompromising way possible.

This November, saw the release of A Dog Called Money, a collaboration with filmmaker Seamus Murphy documenting their travels through Kosovo, Afghanistan and Washington DC as Harvey searched for global, political inspiration for her 2016 album The Hope Six Demolition Project, and so here we pay tribute to a unique and magnificent body of work.

With its moans and groans of anguish and lust, married to raw blues and monolithic alternative rock riffs, Dry was a revelation on its release, and remains an electrifying listen today.

Harvey has never identified as feminist, but the clear-eyed, romance-free take on losing her virginity in Happy And Bleeding, the fevered seduction dance of Sheela-Na-Gig – in which she’s dismissed by the object of her attentions as displaying shocking exhibitionism on a par with the Celtic fertility symbols of the title – and her recasting of herself as a vengeful Delilah in Hair are both potent and deeply, darkly humorous. They offer an unflinching and sugar-free view of female desire that immediately identified her as an artist of integrity and truth. The anger on display, too, was a revelation, a molten outpouring that burned on impact.

Lead single Dress, meanwhile, made an immediate fan of John Peel, who became an advocate and friend until the day he died – The Peel Sessions 1991-2004 collects all of the recordings Harvey and her band recorded for his Radio 1 show and is well worth seeking out. View Deal

Harvey’s second album was her first for a major label, so it remains astonishing that she was given the freedom to make it such a dark, furious, deeply uneasy listen.

Produced by Steve Albini – known for getting to the sinewy heart of songs without adding unnecessary embellishment – and completed in two weeks, Rid Of Me’s starkness allows Harvey’s pagan whispers and anguished howls to take on a vivid life of their own, her threats to twist off heads in the title track given extra potency by the stark barrage of guitar and drums.

It was written while she was reeling from the end of her first real relationship and dealing with homesickness for the Dorset countryside she grew up in, but to read too much into those facts is to underestimate Harvey as a songwriter and storyteller. It’s not always clear whether the songs are born from her imagination or her lived experience, as she embodies characters both male and female, human and animal, mythical and desperately flesh-and-blood.

The album’s seductively evil twin appeared later in the year in the shape of 4-Track Demos. Some of the same songs in an even rawer and more aggressive form, and produced by Harvey alone, it marked her split from the trio who worked with her on the first two albums: Rob Ellis on drums and Steve Vaughan on bass.View Deal

The original delta blues and old-school folk had been a source of inspiration for the young Polly Harvey when she was growing up on her parents’ farm in Devon, and this was more apparent than ever on her third album. 'I’ve lain with the Devil, cursed God above,' she intones on the title track, which opens up to a host of deliciously dark tales of sex, obsession and murder.

Featuring John Parish (her “musical soulmate”), Bad Seed Mick Harvey, and produced by Flood, To Bring You My Love is altogether more atmospheric than anything she’d done before, warm organ tones adding to a growing sense of humid and claustrophobic dread. Her voice has changed too, to become less of a howl and more androgynous, the strut of Meet Ze Monsta conjuring a sense of danger that comes entirely from Harvey herself – she sounds like she’d shank you in a heartbeat if crossed.

Those blues influences are given their dues, too – the portentous Down By The Water, with its tale of a woman drowning her daughter, features a snippet of Lead Belly’s Salty Dog Blues.View Deal

A collaboration with multi-instrumentalist John Parish – whose band Automatic Diamini she had been in before setting out under her own name – Dance Hall At Louse Point offered Harvey a chance to embrace the challenge of setting her words to someone else’s music.

Coming across as a hastily recorded, late-night session, there’s a disjointedness to the album that means it never quite settles into a natural rhythm, the jagged noise rock of Taut and the shrill howl and musical minimalism of City Of No Sun sitting awkwardly alongside a smoky, faithful cover of Peggy Lee’s Is That All There Is?, although There Goes My Veil stands out for its acoustic prettiness.

Working together is clearly a joy for both musicians though – they reconvened for A Woman And A Man Walked By in 2009.View Deal

After the commercial, mainstream success of To Bring You My Love, it would have been very easy for Harvey to continue in the same vein, dreaming up more murder ballads to sate public appetite for gore. But Is This Desire? sees Harvey stretching herself artistically, taking her cues more from trip-hop an electronica than delta blues.

Made during a difficult time in her personal life, Is This Desire? is a dark, disturbing exercise in uneasy listening. Elise, Angeline, Leah, Catherine – this time her characters are named, and they all have a sadness haunting them that is almost unbearable.

The sense of despair, loneliness and hopelessness in the lyrics is beautifully mirrored by the minimalist melodies and Harvey’s unusually hushed vocals. It’s a thing of bleak beauty, a dark night of the soul stunningly rendered. View Deal

After the harrowing Is This Desire?, it’s wonderful to find Harvey rejuvenated on its follow-up. Written at home in Dorset and in New York City, it finds this country girl in love with the Big Apple, with life, and presumably with a significant other.

Arguably her most mainstream album to date, it contains at least two moments of pure joy. One, Good Fortune, finds her whirling around Chinatown and Little Italy in the early hours, overawed and in love and bursting with positivity. This Is Love, similarly, is entirely lacking in cynicism, a pure celebration of romance and lust ('I can’t believe life’s so complex, when I just want to sit here and watch you undress').

She became the first female solo artist to win the Mercury Prize thanks to this album, her slickest work to date, although the ceremony took place on the day of the 9/11 attacks, when she was in Washington DC – she has since described the experience as a “surreal day”.View Deal

That Harvey played, recorded and produced this album all herself, bar the drums (provided by her old comrade Rob Ellis), means it stands as a sort-of sibling to 4-Track Demos, in that it’s Harvey given entirely free rein to communicate directly with her audience without filter.

Deliberately lo-fi, possibly a swerve so as not to become pigeonholed the radio-rock slickness of Stories From The City, Stories From The Sea, it might be punk in approach – even the artwork is a collection of annotated self portraits – but the tone is one of deeply artistic intimacy.

That said, it’s not all elegant rumination on existence – Who The Fuck is a Sonic Youth-style rant of epic proportions, apparently aimed at her hairdresser. And neither is it all gold. Cat On The Wall is a rare slog, oddly colourless and lacking in spirit. But it all still beats most bedroom recordings into a cocked hat.View Deal

In a twist no one saw coming, Harvey elected to construct her follow-up to Uh Huh Her entirely from piano ballads, an instrument she had to learn to play before recording the record, and entirely out of step with anything she’d done before. Unexpected, yes, but then she’s never made the same record twice.

Its ghostly, minimalist vibe finds her altering her vocals, usually so strong and forceful, into a slight and delicate wisp, a ghost adrift over the Dorset countryside. Even the artwork finds her looking like a Victorian spirit, peering primly in a white dress from the shadows.

It’s a tough listen in its starkness, her emotional vulnerability laid bare without more substantial musical layers to shield it. As such, it’s probably the one most neglected by listeners, but as a challenge to herself, it’s a fascinating, gossamer-light oddity.View Deal

Another Mercury Prize-winner (Harvey is the only person to have won the accolade twice), Let England Shake finds her taking on a grand concept – her homeland at war, from the Gallipoli campaign of 1915, right up to the conflicts in Iraq and Afghanistan in recent years.

Her portraits of soldiers and beleaguered civilians, as well as her poetic view of England’s 'damp, grey filthiness of ages', is presented in an oddly dispassionate, documentary style that only serves to give it more power, The Words That Maketh Murder particularly vivid as 'soldiers fall like lumps of meat'.

John Parish and Flood produce again here, and have done a magnificent job of building a chilling atmosphere without ever overwhelming the vocals, leading to something as rare as hen’s teeth: a war album entirely lacking in mawkish sentiment or histrionics.

If Let England Shake embraced a concept, The Hope Six Demolition Project went one step further. It’s an all-encompassing art project that began when Harvey travelled Kosovo, Afghanistan and Washington DC with filmmaker Seamus Murphy, and was built around recording sessions at London’s Somerset House in which the public were invited to witness its progress through one-way glass.

Naturally, what she saw on her travels inspired the lyrics – The Community Of Hope and the album’s title refer to run-down housing projects in Washington DC that were demolished and rebuilt, pricing out the residents who had lived there for many years.

Let England Shake was her first album stepping out of the shadow of personal desires and sorrows to look at the wider world, and this record sees her continue to take in the bigger picture, the genuinely upsetting closer Dollar, Dollar – inspired by her witnessing a child begging for money in Afghanistan – a moment of horrified sadness that’s hard to shake off afterwards.

The evolution of PJ Harvey as a peerless artist continues.View Deal