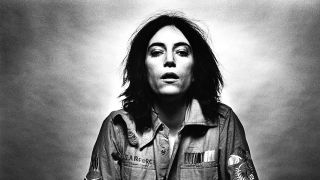 Patti Smith is one of life’s rare unique creatures. A poet, author, photographer and all-round force of nature, the 72-year-old changed the face of rock’n’roll in the mid-70s when her debut album, Horses, appeared, sounding like nothing else that had gone before it. It helped to kickstart the punk rock revolution while remoulding the traditional foundations of rock music for her own means.

Androgynous, seemingly entirely lacking in vanity and remaining at the forefront of the fight for social and environmental justice, the 72-year-old has enjoyed just one single mainstream hit in her 45-year career – back in 1978 – and yet remains a relevant and beloved icon of rabble-rousing artistry and individuality, and a live force to be reckoned with.

Here we take a look at her life’s work, and pick out the high points in a career full of them.

Smith’s heroes have always been benevolent ghosts haunting her musical output, so her decision to make a covers album shouldn’t come as too much of a surprise. As an oddity it’s worth a listen, as she tackles everything from Jimi Hendrix, The Beatles, the Rolling Stones and The Doors to Nirvana via Stevie Wonder and Tears For Fears, twisting familiar songs into weird new shapes.

Sometimes it works brilliantly, as on her rendering of Hey Joe, sometimes it burns to the ground as a noble failure, as on her bizarre banjo-toting bluegrass version of Smells Like Teen Spirit.

If an artist sticks around for long enough, a covers album is almost inevitable eventually, so it’s another one to tick off the Hall Of Fame checklist. Whether most people will listen to it more than once, however, is much more doubtful.View Deal

Opening tracks stand as a statement of intent, and few are as clear as People Have The Power on Dream Of Life, a simplistic AOR rallying cry to stand up against injustice that remains a potent anthem for generations, right up to the current wave of school kids fighting climate change today.

The record was made in collaboration with her husband Fred “Sonic” Smith, who replaces Lenny Kaye’s more experimental tendencies with straight-ahead rock, decidedly adult and surprisingly lacking in surprises.

After nine years of domesticity, far from the limelight, Smith’s return to the rock coalface finds her embracing a new vocal maturity, her previous meandering flights of poetic fancy and explosive sonic exploration replaced with muscular, solid rock anthems that leave the fight to the lyrics rather than the music. View Deal

If 1996’s Gone Again and 1997’s Peace And Noise were Smith’s manifestation of personal grief, Gung Ho takes a much more worldly look at existence, opener One Voice calling for togetherness in the fight for the health and happiness of the planet and trumpeting the emergence of Patti Smith as earth mother.

There’s no mincing words or hiding behind metaphor, her cry of 'awake, people arise!' In Upright Come as direct and clear-eyed as it needs to be. Both songs take their cue from her own generation, from the protests against the war in Vietnam in the 60s, regenerating the hippie ideal for the 21st century.

Politics aside, Gung Ho sees Smith playing with language, turning over phrases and throwing in the odd wickedly coarse expression that clearly delighted her the moment it wormed its way into her brain, as on New Party: 'Why don’t you fertilise the lawn with what’s running from your mouth?'

After a period of reflection and mourning, this is Patti Smith putting herself back out into the world. View Deal

It’s a family affair, with son Jackson on guitar and daughter Jesse on piano, but that doesn’t mean Trampin’ retreats to domesticity.

Pointedly timely, the album finds Smith providing an outpouring of American shame in Radio Baghdad, a dark and furious examination of Bush-era foreign policy, Smith whipping herself into a rage, Lenny Kaye’s guitar mimicking bombs, a sense of panic interspersed with recordings of Iraqi children playing.

It’s a necessarily tough listen, but it’s counterbalanced by moments of tenderness in the soulful and beautiful Mother Rose and the delicate Peaceable Kingdom, a cautiously optimistic plea to rebuild with hope and kindness in the wake of the horrors of 9/11.View Deal

Charged by the creative high point of Gone Again, Smith returns a year later with Peace And Noise. Grief in the wake of her husband’s death is still raw, but there’s a sense of looking to the future, of keeping on going and making the most of precious time left on earth, not least in the meandering 10 minutes of improvised, stream-of-consciousness poetry and noise that make up Memento Mori. In fact, her love of poetry is the clearest it’s been in years, Spell taking its cue – and some of its words – from Allen Ginsberg’s Footnote To Howl.

There’s a dignified rage at play, a despairing look at the Heaven’s Gate suicides on Last Call (featuring her long-time friend Michael Stipe of R.E.M.), while elsewhere she rails against corporate greed, wasted young lives, all presented with a sense of furious hope that people can rise up and bring about change. The sadness of its predecessor has been refined and channelled, adding up to a statement of intent from Smith that she still has much to achieve. View Deal

By 1979, Smith was in a relationship with Fred “Sonic” Smith of Detroit garage rock legends The MC5, and opener Frederick is one of the most beautifully pure love songs of its era; a sense of euphoric joy leaping from the speakers set to a classic rock melody that clings to the memory magnetically. It’s so vivid, the fact that Smith turned her back on music for a decade afterwards, choosing blissful domesticity and motherhood over life on the road, should have come as no surprise.

Just five years after her searing debut, Wave is a defiantly polished affair, a goodbye to the scene that spawned her, the bands that imitated her, and the music industry as a whole. But it’s also Smith at her least filtered and most emotionally open, and remains something of an underrated treasure. View Deal

Fred “Sonic” Smith passed away in November 1994, and Gone Again stands as a beautiful memorial to a man who was clearly very deeply loved.

In fact, this album pays tribute to the many loved-ones Smith lost in the years following Dream Of Life – her brother Todd, close friend Robert Mapplethorpe and keyboardist of The Patti Smith Group Richard Sohl all died in the time preceding its creation. There are also songs for lost souls she didn’t know well, but identified with: the mournfully pretty About A Boy is clearly written for Kurt Cobain.

The sense of loss is palpable, Smith letting down her barriers to display her fragility and grief, exploring the theme of mortality in a way that feels therapeutic and cathartic. And yet she refuses to sink into self-pity, her defiance in the face of tragedy manifesting itself as empathy and positivity, a celebration of the cosmic privilege of living and loving at all, despite the natural order of things.

That Beneath The Southern Cross features Jeff Buckley in his last studio recording before his death a year later adds further poignance to a deeply moving record.View Deal

Taking its title from the name of Pontius Pilate’s faithful dog in Mikhail Bulgakov’s classic novel The Master And Margarita, Banga finds Smith on a new creative high after the misstep of Twelve. Its literary inspiration is a wise choice, as the album finds Smith on fine storytelling form, from a song imagining the voyage of Amerigo Vespucci to the new world in 1497, to a vivid tribute to the people of Japan after the country was hit by a devastating earthquake in 2011.

Vocally, at the age of 65, Smith sounds the best she has in years, clear and youthful and, in her eulogy for Amy Winehouse, This Is The Girl, invoking the spirit of classic girl-groups. It’s mature without the loss of edge, intellectual but eminently listenable, and suggests there’s plenty of inspiration to mine in the years to come. View Deal

Both more experimental and much heavier than her debut Horses, and not entirely positively received on its release, Smith’s second album feels like more of a band effort than its predecessor, guitarist Lenny Kaye in particular stretching his wings to bring a harder rock edge to the table.

The title track, especially, is scatter-gunned with 70s New York grit. A primal 10-minute noise rock epic, well ahead of its time and threatening to fall apart at any minute, the piece deliberately goes out to provoke and challenge those who came on board with the debut album, and was loved and loathed by fans in equal measure on its release. In fact, it sounds like nothing less than an instruction manual for the art-rock kids waiting in the wings, a not-so-coded message for Sonic Youth and their ilk to rise up, punish their guitars and embrace the noise.

There are elegant moments of beauty to balance it out though, not least in the gorgeous but rough-edged pean to outsiderdom Pissing In A River, a hint of the melodicism Smith was to embrace in its follow-up, Easter. View Deal

Ever the contrarian, with her third album Smith contrived to combine her most mainstream song to date (and still unsurpassed in this sense), and her most shocking.

Steered by the record label, Arista, who were hungry for commercial success, the former, Because The Night, was cowritten with Bruce Springsteen (with his producer, Jimmy Iovine, at the helm) and remains the one Patti Smith song most non-fans know. A fist-pumping power ballad dedicated to rebellious romance, it provided the blueprint for the sound of rock radio throughout the entire decade that followed it.

On the exact opposite side of the coin is Rock ’N’ Roll Nigger. Musically, it’s brilliant, a spectacularly heated slab of garage rock, but lyrically it’s hard to see it as anything but an attempt to shock. Even in 1978 the word was offensive, now breathtakingly, unforgivably so. Yes, it reintroduces danger into rock’n’roll, and Smith herself has defended her intentions as referring to anyone “on the fringe of society”. But it hits a sour note when someone so demonstrably intelligent attempts to reclaim something – something that’s caused so much pain to so many – that is clearly not hers to reclaim.

The rest of the album lands somewhere between the two extremes and adds up to an endlessly fascinating whole, visceral garage rock rubbing up against tender moments of pure love that hinted at what she was planning for its follow-up, Wave.View Deal

In her memoir, Just Kids, Smith evocatively talks about her youthful escape to New York, her time as photographer Robert Mapplethorpe’s muse, life on the gritty, dangerous and thrilling city streets and dingy nights in the Chelsea Hotel, not to mention her equally heated obsessions with both Jim Morrison and Arthur Rimbaud.

Those days are perfectly, vividly captured in her astonishing debut album, an edgy explosion of dirty-fingernailed poetry set to stark garage rock that paved the way for punk to come.

From the opening line of a dismantled and reassembled take on Van Morrison’s Gloria – 'Jesus died for somebody’s sins, but not mine' – it’s clear that this is a singular, uncompromising and shamanic voice, perfect in its imperfection.

Birdland, meanwhile, showcases Smith’s poetry at its most accessible, set to improvised, barely-there guitars and piano, beautifully produced by John Cale, and entirely mesmerising. Unflinchingly exploring religion, death, childhood and the human condition, taking the groundwork of the beat poets and transforming it for a new, even bolder generation, this masterpiece remains essential. View Deal