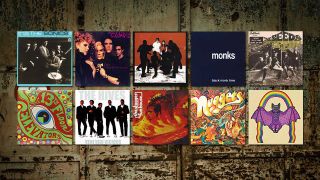 After the British invasion inspired a generation of moptop-sporting kids to pick up guitars and make their own crude but often thrilling racket in basements, bedrooms and outhouses across North America, plenty of them soon found that the record industry was only too keen to snap them up to make a record or two.

Relatively few made it into the charts, or past a couple of covers-filled albums, and the haste in which they were signed and milked for potential hits meant few were particularly polished in their performances.

But the best of those records would be rediscovered in later years and would prove to be highly influential, meaning Garage Rock has since become a genre in its own right, characterised by ebullient energy, snarling rock’n’roll spirit and feral R’n’B punch – as well as a distinct touch of trippiness in some cases. Here are our pick of the must-have long-players from the golden age of garage (1965-67) and beyond.

Just as R’n’B was being smoothed off to an ever-shinier finish, Tacoma, Washington mob The Sonics brought the noise back big style.

Recorded on just a two-track studio set-up, Here Are The Sonics!!! (and boy did they merit the triple exclamation mark) presented a raw-throated, sandpaper-guitared assault on a collection of rhythm’n’blues classics, which were, somehow, outshone by a clutch of positively demonic sounding original compositions such as Strychnine, Psycho and The Witch.View Deal

If you were under the impression that all garage rock stuck to a similar, no-nonsense template, this bunch of ex-GIs based in Germany disproved that from the get-go.

Driven by geographical isolation from pop trends and good old-fashioned boredom, they shaved monks’ tonsure bald patches into their heads, in a fashion statement roughly 700 times as anarchic as your last tattoo, and made raucous, ragingly tinny R’n’B that made the Rolling Stones sound like Pat Boone.

Their one and only album probably sold the least records of anyone on this list, but The Monks were arguably as original and innovative as any of them. Oh, and songs such as I Hate You, Drunken Maria and Oh, How To Do Now rock like Satan’s own suspension bridge.View Deal

As beat pop’s milky white take on R’n’B began to curdle under the influence of strange mind-altering substances, The Seeds threatened to corrupt the template further with all manner of delinquent, misanthropic malevolence.

Sky Saxon’s reedy voice lent an extra, well, seediness to their attitude-addled brand of blunt-instrument rock’n’roll, but the swirling keyboards that increasingly enveloped their sound suggested things were always on the verge of getting really quite scary, man.View Deal

Go to your local vinyl emporium and you’ll invariably find these releases in a section marked ‘Garage/Psych’.

But If many of the early garage bands were dipping their toes in lysergic waters by 1966, Roky Erickson and his bandmate Tommy Hall were already up to their third eyes in it, to the extent that the latter’s sleeve notes for this debut album openly advocated chemical experimentation as a pathway to a higher consciousness.

The title can also lay claim to establishing the ‘P’ word as the defining adjective for a whole era of musical experimentation. And their songs, addled by Erickson’s bluesy vocal honk and Hall’s wonderfully wobbly sounding electric jug, were like R’n’B thrown headlong into a hall of mirrors.View Deal

Given the sheer scale of their influence, it’s easy to forget that at heart, The Stooges' minimalist chug and nihilistic howl was essentially garage rock rebooted with even fewer chords, a harder edge and a meaner, more anarchic approach to kicking over the statues of rock’n’roll.

This is generally considered to be the pick of their two albums, but either this or their self-titled 1969 debut represent indispensable inclusions in any rock fan’s collectionView Deal

While there weren’t many Garage Rock acts that got their act together sufficiently to make a whole album strong enough to justify a purchase alongside one or two outstanding singles, it’s fair to say that this compilation did more for those bands’ rehabilitation than any other release.

Subtitled Original Artyfacts from the First Psychedelic Era, it introduced a pre-punk generation not just to the phrase ‘punk rock’ (coined by liner notes writer and future Patti Smith guitarist Lenny Kaye), but to a whole sub-culture of rough and ready proto-psych ne’er-do-wells that had nonetheless left their grubby fingerprints on the latter stages of beat pop era they sprang from.

It rescued neglected classic cuts such as The Standells’ Dirty Water, The Count Five’s Psychotic Reaction and The Castaways’ Liar Liar from the bargain bucket of history, and the expanded box sets and sequels released since have unearthed many more glorious rough gems from the same era.View Deal

There may have been sizeable chunks of glam glitter and rockabilly swagger dotted around these New Yorkers’ sound, but at heart they had the toxic fumes of the original garage bands running through their scabby veins, and even covered The Sonics on this debut long-player, alongside supremely stomping, sleazy romps such as Garbage Man and TV Set.

The Cramps may have emerged from the latter days of the CBGBs scene, but they sounded like they’d strutted straight out of a bonkers B-movie.View Deal

Formed by five Swedish disciples of the original garage sound, The Hives beefed up the original brutal blueprint of the genre with irresistibly infectious hard rock riffs to create pop songs with sharp suits and big boots on (which they claimed were written for them by a fictional svengali, Randy Fitzsimmons).

Their Poptones compilation Your New Favourite Band launched them to Next-Big-Thing status in the early 2000s, but it curates the pick of their first two albums, of which this is the best. Purists might scoff at their cartoonish image, but put Hate To Say I Told You So on loud and resistance is futile.View Deal

Just as the testosterone-fuelled, big-shorted plod of nu-metal was using the most cretinous aspects of hip-hop to dumb down hard rock to within an inch of its life, Jack White and his alleged sister (actually ex-wife) Meg succeeded by dumbing it up instead.

Stripping their sound down to just guitar, vocals and drums, the White Stripes took skinny-assed blues riffs and crunching rhythm and along with a fair modicum of lyrical wit, made a sound that somehow sounded totally original.

This third album remains their finest hour, and showed that going back to basics could sound anything but reductive or simplistic.View Deal

Proof that Garage Rock need not just be about the purist primitivism of influential garage revivalists such as Billy Childish, John Dwyer’s musical vision took a similarly brutal but effective rock’n’roll songwriting framework and coated it in lo-fi sound effects and claustrophobic cave-fulls of reverb and feedback, while retaining the adrenaline-wired buzz that always characterised the best garage rock.

There are plenty of other examples to choose from Thee Oh Sees’ prolific output, but they’ve arguably never bettered this album.View Deal