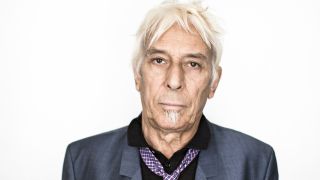 Aside from an astonishing 45-year solo career, John Cale (OBE) reshaped the musical landscape as both a founding member of The Velvet Underground and producer of such enduring alt.rock touchstones as The Stooges eponymous debut and Patti Smith’s Horses.

More recently, Cale has revisited his 1982 solo album, Music For A New Society (a stripped-to-the-bone, semi-improvised album), to radically rework its constituent material for a new album, M:FANS. On February 3 – the eve of the record’s release – he’ll continue his live exploration with a return to London’s Roundhouse.

**You’ve spoken of the original sessions for Music for A New Society as being ‘agony’, with your mood at the time as ‘grotesque’. Why?**

I wasn’t in a very good place, and I really wanted to be honest about what was going on and so whatever happened, happened. The basic rule was that it doesn’t count unless the tapes are rolling. So I had to give some thought to what the song would be, and start from scratch. Every song was meant to be improvised. So that whatever came out, came out.

What was it that made you return to the album?

Some European festivals see reappraisals of albums as a good basis for having a festival, so they say can you come and play Fear or Paris 1919 in its entirety, and once that started, a lot of different albums popped up. They asked me to do Music For A New Society, so I did it. I re-arranged and generally half re-wrote them for the performance. They were all in new arrangements so that kept the process interesting. I don’t like playing things the same way twice, it’s more interesting when you have a different viewpoint on what the song’s about.

Re-visiting the material, you found yourself loathing every character that emerged from the original sessions. Weren’t these characters just facets of your inner psyche?

Exactly… Well, I don’t want them to exist, I don’t want to see these guys again for a while. But, yeah, they were. The process was very similar to method acting, using the mood of the music you’re playing you develop a character inside that mood. Yeah, darkness is the word.

While making M:FANS Lou Reed passed away. Presumably this bereavement informed the rest of the creative process?

Yeah, it did. It took the wind out of my sails, but I had the song If You Were Still Around and that seemed perfectly appropriate. [actor, playwright] Sam Shepard wrote those lyrics a while ago, and we went through a lot of different arrangements. And, yeah, it was difficult to do that.

Did you try to come to terms with Lou’s loss by writing your way through the grieving process, as with Songs for Drella, which followed Andy Warhol’s death?

Well, I couldn’t avoid it. It happened, but
I don’t know about writing my way through the situation. I think it just popped into my head and it was the perfect solution for me.

The spiky Lou Reed is the one most written about, but whenever I spoke with him he was only ever charming. What made Lou Lou?

Well, you just described him. You didn’t know what you were going to get. One minute he was one way, another minute he was another way. It was interviews as entertainment.

While you have negative emotions associated with Music For A New Society, the album’s audience will have developed an entirely different relationship with the songs. So by placing a romantic composition like Close Watch in a radical new setting you’re stepping on what your audience might consider hallowed ground.

I was convinced that this song had a different life when I came up with the arrangement, and having Amber [Coffmann] sing it helped give it another perspective. It almost came as a surprise, it just happened one day, and it took the song out of where it was before. The way it was before was more romantic, now it’s more of a mood piece.

You’ve never been the most prolific of producers, but the albums you’ve worked on really counted. Aside from The Velvet Underground, there’s the Stooges, The Modern Lovers and Patti Smith’s Horses. What’s the integral facet of a great production?

Well, you can’t do it without an artist that’s hell bent on being an artist, and all of those had a unique path they were following. They weren’t going to go away and become librarians or anything. They were artists, they would always be artists, so that really makes the power of what they’re doing much stronger.

At the risk of trying to distill the compositional concept of drone theory down to one snappy soundbite, why is the one note piano part on The Stooges’ I Wanna Be Your Dog so incredibly effective?

(Laughs) Well, it works all the time. It has all the elements of a petulant little brat who’s just slamming the piano and singing. But it fits on so many different things, because it serves to open up space both within the song and around the song.

Did you ever imagine for a second the enormous effect that The Velvet Underground would have on the musical landscape?

Well, I had all the hangovers of an avant-garde and classical background, and in the avant-garde world it was very important to be totally original, not to do anything that anybody else had done, and I thought that applying those rules to rock’n’roll was really important and with Lou, who could improvise, you’d do more than just normal, repetitive rock’n’roll concepts.

The Velvets enjoyed an incredible afterlife, during which they’ve gone from the fringes of the avant-garde to the heart of the mainstream. Not bad for an art project.

Where it came from was an art project. It went through that world, came out the other side, and people said: ‘Hey, wait a minute, that’s rock’n’roll’.