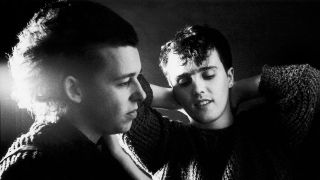 They’re the subject of the current issue’s Outer Limits feature. And they, were, says our man inn the know, very proggy indeed…

Draper noted, correctly, a definite prog ambition in their words and music._ Start of The Breakdown_, the closing track from The Hurting, was “really proggy”, he noted, perhaps thinking of Mel (Alan Parsons Project) Collins’ flute solo or the jazzy percussion of Ross Cullum, who has worked with everyone from Kate Bush to Karlheinz Stockausen and was usually heard listening, in between recording sessions, to John Coltrane. The fact that The Hurting was a concept album of sorts, about TFF boys Roland Orzabal and Curt Smith’s dysfunctional childhoods, added to their PQ (Prog Quotient).

Songs From The Big Chair had an even higher PQ. Listen to Broken - it sounds like Yes jamming with Asia. Or the seven-minute Listen, which features a soaring vocal from Marilyn Davis that has Clare Torry circa Great Gig In The Sky written all over it.

I Believe (see end of feature) is a near relation of Wyatt’s Shipbuilding. Mothers Talk is a distant cousin of Weather report. And there is a pomp and majesty to the production and arrangements of singles like Shout and Everybody Wants To Rule The World that were none more prog. No wonder Orzabal admitted in that recent edition of Prog: “We were trying to out-Horn Trevor!

Then there’s The Seeds Of Love, whose credits read like something off a prog album, with names such as world music prime mover Jon Hassell on trumpet, Pete Hope-Evans of Medicine Head on harmonica, Horn’s right-hand-man Luis Jardim on percussion and Phil Collins and Simon Peter Phillips (Mike Oldfield, The Who) on drums. And tracks like Swords And Knives and Year Of The Knife were object lessons in excess and sonic bombast.

Still think they’re a couple of pop muppets from Bath?