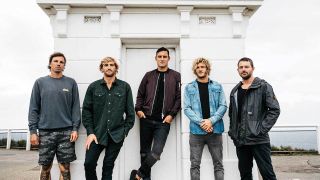 Not only did 2015’s Ire mark a career-best album, but its jump into more arena-friendly song structures saw Parkway Drive make a measurable step up in venues and festival slots around the world. This year will see the Aussie heavyweights try and make a further claim to metal’s throne – and it’s a chance the guys are grabbing eagerly.

“We are gonna be upping our game,” promises Winston McCall. “The Ire cycle was a massive amount of work, but it’s all been part of a bigger goal. In 2018, everything steps up and moves forward. We have gained so much momentum over the last couple of years, and we not only want to harness it but do it justice. There’s no point in slacking off; I feel as though there are now expectations of what we can do and could be capable of. We don’t want to just coast by – we want to blow everyone out of the water.”

While Ire heralded the most successful chapter in the band’s career, Winston is aware that it came from a place of great risk, and that the band may have to be similarly bold in their next steps.

“With Ire, we were basically walking a tightrope in the dark. We were very careful with the evolution of our sound, but at the same time we had no idea where it was actually leading us. The success that has come out of it has been amazing; it opened so many doors to us and we couldn’t be happier with the risks we took. Creating something that follows that success means stepping out of a great shadow, but the confidence in ourselves and our craft following Ire has been far more liberating than anything we have felt before. It’s given us a focus and drive we’ve never had when it comes to pursuing new sounds, and it was nice to see the validation that you could grow as a band, and still stay heavy, which is perfect for us.”

With the release of the album – which we anticipate coming in late spring – set to be followed by a summer of touring that will include a stop at Download in June, it’s going to be a big year for all things Parkway.

“Our hopes are to create music that represents the people we are and what we enjoy doing. That’s always been the goal from day one,” Winston emphasises. “Secondly, as always, we hope to share the sound with as many people as we can. You can’t force music on anyone; they have to connect with it, so we have no desire to try and manipulate what we do in the hope that more people will accept it. We are at a crazy place when it comes to the amount of people picking up our records and rocking up to see our live shows, and we plan on stepping it up in both departments. We have so much planned for this year.”

Get ready, world. Parkway Drive are coming for you, and they are not fucking about.

Find out what the biggest and best bands in rock and metal have planned in 2018 – only in the latest issue of Metal Hammer. Buy it directly here or become a TeamRock+ member to read it right now.