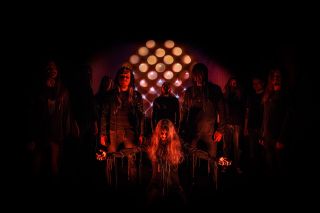 Sometimes you want to unburden yourself from the rigours of human existence, find a clear spot outdoors, gaze up at the stars suspended in their celestial balance above, and wait for the DMT to kick in.

Two prongs of a Tampere, Finland transcendence-inducing triumvirate that also includes Hexvessel in their ranks, Oranssi Pazuzu and Dark Buddha Rising joined forces at Roadburn last year for a commissioned lurch into interstellar intoxication under the banner of Waste Of Space Orchestra. Perhaps inevitably, that journey to the frazzled far reaches of consciousness and general wellbeing has now been committed to tape in the form of Syntheosis due to be dispatched from the Svart Records mothership on April 5.

That shared sense of brooding menace, solar forces percolating until they reach a detonation-ready state - not to mention that equilibrium-annihilating groove like being constantly nobbled in the back of your knee by a planet - are all part and parcel of Syntheosis. And rather than let the wild energies of the live experience take over, this is a more refined, methodical take that will unravel your brain with painstaking precision over the course of its 96 Earth minutes.

From the initially languid, heartbeat pulse of Journey To The Centre Of The Mass, gradually slipping off its axis as drifts through the Mindfuck Nebula amidst teeming streaks of starburst Moog to the sentinels-of-the-universe rite that is Infinite Gate Opening and beyond, Syntheosis journeys into 70s, mystical sci-fi-inspired realms both intimate and vast, and we have a stream of the album in all its brainwave-retuning wonder.

“"Finally, after countless hours of distillation,” broadcast the band themselves, “the Syntheosis is released from our hands to the world. Let this album be our manifest as it stems from the core of our art. From collaboration, this evolved to an entity that represents our sonic unity as a collective. Syntheosis is elements colliding, melting together and mutating to a singular new existence.”

Without further ado, watch as those stars quiver, collapse into a whorl, and hoover you across the threshold of sanity, before giving yourself to the far reaches of Syntheosis below!

Beam yourself to the Waste Of Space Orchestra Facebook page here