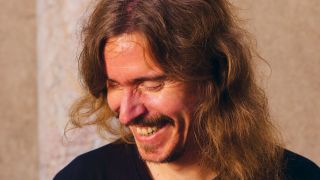 The Opeth frontman opens up about his musical history, eclectic taste and key influences…

“I’ve always been a massive Black Sabbath fan and I was mainly searching for bands that looked like Sabbath in the 70s, because at that time I was wearing bell-bottoms and I didn’t look like your typical metalhead. I always stood out and back then people would point and laugh at me, so it’s funny that now that same fashion has come back. I guess you could call me a pioneer in that sense,” Mikael Åkerfeldt smirks as he reminisces upon his younger years.

The Opeth frontman is an open book when it comes to talking about music and the past. His long career as a popular musician has made him one of the most recognisable faces in metal and prog, yet his modesty and humour suffice to show that he has never been one to take himself too seriously.

“It was while picking up records of bands that looked like Black Sabbath that I stumbled upon groups like Yes, King Crimson and Wishbone Ash because everybody looked the same in those bands.”

Ever the gentleman, opening doors for ladies and greeting everyone with a smile, Åkerfeldt is ageing gracefully, from those 25 years of Opeth and into a new era. He’s ditched his heavy smoking habit and now prefers wine over beer, and today the singer dons rock star Aviator sunglasses indoors as he recounts fond memories of buying records from second-hand shops in downtown Stockholm.

“It was while picking up records of bands that looked like Black Sabbath that I stumbled upon groups like Yes, King Crimson and Wishbone Ash, because everybody looked the same in those bands. I may as well have stumbled upon REO Speedwagon, you know what I mean? This is how I became acquainted with prog.“

Long before Åkerfeldt perfected Opeth’s death metal and prog blend, he was a young man growing up in Sweden, eager to absorb all aspects of his country’s musical heritage.

“When I was a kid, I was more similar to how I am today than when I was in my teens and all that mattered to me was metal. Of course in Sweden you grow up with Abba and whatever else is playing on the radio at the time, like Cat Stevens. Metal and rock music have always been popular in my country, ever since The Yardbirds came to play in Stockholm in 1967. There was a flourishing rock scene there from very early on, so metal arrived quite early on also. I remember growing up, when I was five or six years old, with Kiss, Iron Maiden, Judas Priest and Zeppelin – so I would listen to all of that stuff alongside Eurovision.

“In those days you didn’t discriminate against pop music. If it was good music, you listened to it, but then I wanted to be cool so I pretended I didn’t give a fuck about popular music. I’ve gone back to how I was as a kid now, by taking an interest in all different kinds of music.”

Respected for his raw talent as a musician, Åkerfeldt was not always the prog virtuoso he is today. In fact, his first band Eruption was proof that you may be born a performer, but you still have to start from the bottom in order to get to the top.

“When you play guitar and for the first time you have another guitar backing you up, it feels amazing.”

When asked about the Eruption days, he says, “We were pretty shit. The first song I ever wrote was called Abandoned Life. Up until then I had only ever been playing on my own so I remember being amazed because we were four or five guys in the band at the time, all playing together in a room. When you play guitar and for the first time you have another guitar backing you up, it feels amazing. So basically the whole learning and progressing as a musician part of the experience was more important to me than the actual music we made.

“It was just so juvenile, but it was fun, even though we didn’t have any good songs or anything. This was the meat and potato of our formative years, and mainly this is how I learned about the dynamics of being in a band. Musically, however, we did not amount to anything, but this fun experience ultimately became Opeth.”
Although his manner of speaking is gentle and his conversation always sharp and quick-witted, the first time you meet Åkerfeldt, the most striking feature is his loud, strong, bellowing voice. It breaks the image of the often self-deprecating man and paints a wise and charismatic entertainer instead.

He explains: “It’s a Swedish social trait that we’re not supposed to speak up if you’re good at anything. You could be the King of Sweden and still be modest about it. We’re not a country that boasts and we don’t grow up with that instinct to be proud of our abilities. I’m not a frontman, a singer or even a guitar player, but I’m all three. If I were to compare myself to other frontmen, singers and guitar players then I’ll always say I’m shit. I know I have some qualities and what I’m good at, so to speak, but all in all, I’ll never go around thinking that I’m the dog’s bollocks.”

“Steven Wilson’s a British tea drinker who eats biscuits and I’m more into beer. We get along really well as friends and we talk about everything. I really don’t have enough good things to say about him.”

Heavy lies the crown on the head of a frontman for an ever-changing band like Opeth, and Åkerfeldt’s response to fame is as dismissive as you’d expect from one so self-deprecating. “I like hearing good things said about me, and I know now after 25 years that we have made some kind of impact, or even that I’ve managed to make an impact in the music scene. You’re only as good as the best thing you’ve done. I feel I have no time to enjoy what I’ve done because it’s either forgotten or soiled with insecurities.”

Conversely, Åkerfeldt takes great satisfaction from his one overriding obsession – vinyl collecting. It’s an occupation that has been instrumental in his development from a metal-obsessed teenager into the wise music connoisseur of today.

“My private stash of vinyl is a pretty big collection to most people,” he says proudly. “It’s an impressive mix of psychedelic, jazz, singer/songwriter, progressive, heavy, 70s… There’s even some pop in there. However, what makes my record collection really big is that I buy doubles of everything. Every time I find a copy of The White Album, I have to buy it because every record is numbered, and I do the same with Sgt Pepper. The Beatles are a great one to collect because there are often small changes on one of them, like even a fucking small credit for the publishers or something. This makes it collectable.”

And in parting, he can’t resist firing a playful shot at sometime Prog contributor Lee Dorrian.

“Lee has several vinyls that I want, including Red Dirt, a British band who put out a heavy blues record in the 1970s. I want it and I will have it one day. It’s going to set me back about £1,500, which is worth it, for my sanity at least. All I want is to sit in my sofa, look over at my collection and see the tiny spine of the record sticking out that says ‘RED DIRT’.”

And with that, he politely takes his leave. Prog’s modern day renaissance man, still fired by his long-abiding passion for the music.