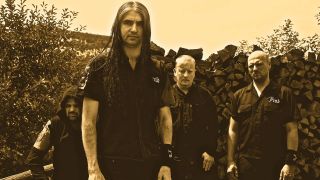 Although they’re as drawn to history and culture as much as their Nordic peers, Sogndal’s Vreid have always focused on matters closer to home, taking on themes such as Norway’s resistance to the German army during WWII and the true, tangible nature of evil.

The band’s seventh album, Sólverv, due to storm out of the Indie Recordings barricades on October 9, has drawn its attention to their local Sogndal valley and the band’s ancestral heritage - their forefathers who fought and died in its defence.

Typically stripped down but still epic in its scope, Sólverv draw its riffs from the very depths of Norwegian black metal, but make its presence felt in the most immediate manner. We have an exclusive window into the album in the form of an utterly captivating video for the title track, directed by cover artwork maestro, Kim Holm. Set in the Sogndal valley, it not only mixes monochrome and colour to striking effect, but adds in animation and disorientating stop-motion edits that bind its natural setting to mindwarping psychedelia and a searing tale about the cycle of life.

“I can say with all honesty that this is a milestone track from Vreid,” declares bassist Hváll. “This song defines all of our work, and feels like our strongest accomplishment to date. Working with the wizard Kim Holm is an enormous inspiration for me. When I saw his work for the first time four years ago I got the shivers. He has gotten the Kittelsen/Valstad touch that I haven’t seen by any artist today, yet a complete unique and modern signature that makes him original. He has brought a new dimension to our art, and the way his artwork for the album has transcended into the video is mesmerising.”

“Working with Vreid has been a revelation,” says the director himself. Hváll had a singular guiding vision for the front covers, but still gave me complete freedom with the rest of the artwork. I wanted the video to reflect the song: relentless and unpredictable and ever-changing. I couldn’t be more pleased with the end result.

“As a father, I developed a fascination with the children’s series, In The Night Garden by Andrew Davenport,” he says of the video’s inspiration. “The attention to detail, economy of production, and unique design creates a sense of dream, and I wanted to subvert those tools and create a nightmare. I couldn’t be more pleased with the end result.”

Open up your third eye and gaze into the wonder that is Sólverv below!