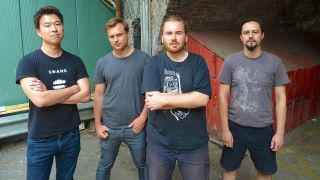 Think rock music peaked in the 90s? Then you'd probably benefit from wrapping your ears around this week's fresh new band, London quartet The Lightness Of Being, combining as they do the best parts of Rob Zombie's rollicking riffs, Marilyn Manson's breathy drawl, Deftones' preoccupation with post-rock and Placebo at their most ethereal, with the complexity of Helmet and Filter thrown in for good measure. The TL;DR version? Imagine the sort of thing Music For Nations were signing in the 90s, polished up for a modern audience, and you're basically there.

We catch up with the band to find out more about their journey, their music, and what they have lined up for next.

Can you introduce yourselves - where are you from, who does what and what are your roles in the band?

"We’re a four-piece from London. Gabriel's originally from Singapore – he's on guitar and vocals, Sergio's from Poland – he's on the drums, and the native Londoners, Sam and Chris, play guitar and bass respectively."

"Gabriel was blasting some Meshuggah on his stereo from his flat. Sergio overheard it and they started talking and things started from there. Sergio hadn't played drums for several years as he injured himself a couple of years back. He’d been playing in a few death metal bands prior to the accident, and was itching to get back to drumming. They then found Sam and Chris by posting rough demos and holding auditions."

"We listen to an eclectic range of stuff, but share a common love for Queens Of The Stone Age, Deftones, Soundgarden, Kvelertak, At The Drive In and Mastodon."

How would you describe your sound in three words for people who've never heard you?

"We took time developing what we think is recognisable now as our sound. Everyone in the band has different tastes and influences and we try to make sure those different sides come through in the music. For the first year we jammed a lot and played shows around London. It wasn’t until after two-three years that we set about recording and releasing our first EP. Took a while to figure out the songs and sound that represent us, but we feel it was worth it."

What's the story behind the new EP Diversions?

"The songs on the EP are about living with the tensions of modern life, and inspired by the stories of the people around us. With technology we’re getting more and more absorbed by our phones and computers, our priorities are getting turned upside down. Life and the other things that matter outside our phones are almost becoming the distraction. It wasn't too long ago that we could just sit down and listen intently to music. So the title is a reference to that."

How did you approach writing and how did it come together?

"Things generally start off around a riff or melody we stumble upon, then we trial out the ideas in the rehearsal rooms to see if they feel good. We’ll then work on a track intensely for a couple of weeks – then leave it to let things settle, coming back later with fresh ears. We’ll put a lot of work into developing demos, working sounds and parts, ironing out the structure before recording the drums in the studio."

What's your favourite story/anecdote from recording the EP?

"We rented some nice Ludwig drums for the recording. However, for some reason the rental company didn't believe Sergio was who he was (as the Keyser Söze of double kick-drum)! So one of us had to scramble over from the other side of town ASAP with some ID to get the equipment. The recording started late, but Sergio is a man who performs under pressure, so everything was alright in the end."

What, in your opinion, is the stand out track on the EP?

"The three tracks are each a bit different, and we love playing each live. But not to dodge the question… Bottomfeeder stands out. The track starts with a 'we mean business' syncopated low riff, locking in with vocals, before the full band kicks in with a full-blast chorus. It builds into an explosive solo and keeps a dark, disquieting tone throughout. The video matches the tone – keeping us on edge! 'Everybody rests easy…'"

What do you hope people will take away from the EP and your music in general?

"The new EP is shift to a darker, dynamic and more unsettling tone. This move in a heavier direction is likely here to stay. So people can expect more tracks like these in the near future."

"We’ve been lucky enough to have had some fun shows where wasted people we’ve never met have been transported into a frenzy and occasionally puked at random."

"Random pukers. But… we love playing live, playing live was our foundation before recording and songs have to work well live or they’re not something we’d now release. The atmospheric delay and effects on recordings are different live. It’s more raw but still a key aspect of overall dynamics."

What are you most looking forward to about the future - what's coming next?

"We’re busy with further new recordings and releases for 2018! We pretty much have the fourth EP done, and we’d love to chat about that when it appears."