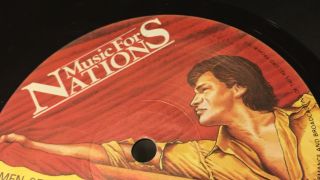 It’s too easy to get overly comfortable in the warm, safe bosom of the Music For Nations thrash-era of the 80s. I also wasn’t literally around listening to the music in the 80s. So instead of fobbing you off with the same old, same old, here are 10 of my personal favourite Music for Nations songs from around the time I first started listening to these bands to when I joined the label in the late 90s…

Draconian Times was a landmark album for not just Paradise Lost but for UK metal. And for me, The Last Time, Their third album for Music for Nations (and fifth since their debut, Lost Paradise, released in 1990), is the stand out track: that opening riff, the crushing rhythm section, the single ringing note which penetrates the track sporadically throughout. It makes me feel like I’m 15 again.

In six short years, Anathema had gone from the guttural doom-laden Serenades (1993) to their fifth album, Judgement (1999), an album full of light and shade and surprises. This is the album where the band emerged from their metal chrysalis and became a rock band… but what a rock band. The opening track Deep laid the foundation for what is, in my opinion, Anathema’s best album.

These are mere words on a screen. Just play the song.

Cradle of Filth had not put a foot wrong to this point and I could have quite easily chosen any album or track of theirs, but for me From The Cradle to Enslaved was the closest the band got to writing a ‘straight’ rock/metal song (albeit a six-and-a-half minute one). The riff which comes ripping through a minute and a half into the track is the best they ever wrote. I know the band aren’t too keen on this track, but this is my list and not theirs.

The sonic juggernaut that is Neurosis came into their element on Times of Grace. An album so heavy that it’s been compared to the Elephant’s Foot at Chernobyl. The Doorway opens with not a “hello and how are you doing?”, but more with a ‘FUCK YOU!’ and repeated stamps to the throat.

Originally released on Opeth’s debut album for Music for Nations (and their fifth since their debut), The Leaper Affinity opens Blackwater Park. But it was whilst recently putting together the Lamentations triple LP that I was floored by the live version. The depths of admiration I have for Opeth has no bounds.

Entombed – Wreackage (from DCLXVI To Ride, Shoot Straight and Speak The Truth, MFN216, 1997)

When death metal meets rock’n’roll. No one should be surprised that Entombed’s drummer wrote the last song on their fourth album. Nicke Andersson went on to form and front the brilliant Hellacopters. The whole album is ferocious, but this track just destroys.

The sounds of a herd of galloping mammoths. I defy anyone to listen to this track and not bang their head and punch their fist in the air. Riff upon riff upon riff! I’m not going to lie and say it’s the best song ever written, but I saw them live in London when I was 16 or so and have been in love with it ever since.

A criminally underrated album and a personal highlight from the MFN catalogue. Many bands proclaim a song is ‘like a journey’… well, take a listen to this because it goes to the moon and back. Goodness knows what they were taking, but I’m glad they did.

It’s a death metal version of The Final Countdown. What’s not to love?