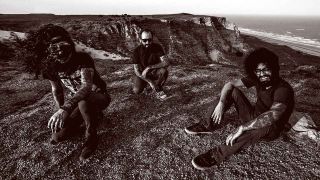 Steve Von Till is a man who’s spent his life creating challenging, experimental sounds. From his own work as vocalist and guitarist with Neurosis to the platform he gives those who “feel the fires of inspiration” as part of Neurot Recordings, he’s played a large part in shaping the sound of the experimental underground over the last three decades.

It follows, then, that one of 2019’s most exciting new releases – Metaprogramação, the third album from Brazilian experimentalists Deafkids – has come from Neurot’s imprint, and with Von Till’s fervent backing. “In 2016 I read a headline [about Deafkids] that simply said, This Band Sounds Like No Other,” he tells Louder. “The cynical ageing punk rocker in me immediately thought that to be a bullshit claim. So I clicked on it and put it on the office stereo, and I am so incredibly glad that I did.

“I was immediately mesmerised. I listened to that EP two times in a row in its entirety. It put me a in a trance and blew me away – I was amazed that something could somehow be referencing things I had heard before but was, as claimed in that headline, completely new and unique.”

Von Till’s enthusiasm was such that he reached out to the band and a relationship was formed. “It sounded like a mash up of early '80s Discharge, late ‘80s Ministry, late '70s Throbbing Gristle and Ginger Baker with Fela Kuti, but all at the same time,” he says. “As if they were all playing the same song in different rooms down a long corridor, which opened up into the jungles of Brazil with the sound of indigenous drums. Their songs sound like wandering up and down that corridor with the different aspects rising to the forefront and fading away as you go.

“Of course the band name-dropping is a narrow-minded way for me to explain it, because they are so much more complex than that. But it gets you in the ballpark. It's really just three young and super-enthusiastic deep music heads from Brazil with primitive, basic equipment.”

To celebrate the band’s release, Von Till sat down with Louder to explain what’s so special about Metaprogramação, one track at a time. “I can't say enough positive things about this record and this band,” he says. “I am so grateful that they exist, that we have the opportunity to work together and get to know one another. In my opinion they are one of the most special bands in underground music right now. And they are beautiful people.

“It’s all heart, sweat and blood.”

“This track definitely sounds like an invocation, setting a dark meditative tone for what is to come. Take a few deep breaths, because we are about to go on this journey ready or not. I think the first time I heard it, I was having a busy day and was totally impatient and wanted to get from the abstract to the more "rock" bits. But this band demands some time – and now that I think about it, that is such a welcome thing to invest in this day and age of endless multitasking.”

“At the end of track one, leading into track two, it feels as if the ancient plant medicines that Deafkids have sonically distilled for us are beginning to take effect. The ritual has begun – we are definitely looking out that last door of the corridor I mentioned earlier. Moments like this I think is what links them to their place of origin. Coming from Brazil, they have grown up in a culture infused with the musical influences of their indigenous roots, Africa, Europe and their own unique Brazilian forms of punk, industrial and psychedelic music. Clearly they have digested all of that and re-synthesized it into a new form that is their own, yet represents it all. You have to surrender and dive in to get the full benefit.”

“This track is really hypnotic, like you have been transported inside the machine generating that pulse. The rhythm of it to me feels very Afro Brazilian, its got a groove to it. I know nothing about the processes they use to record tracks like this –  its a mystery to me. I thought about asking them, but I think I prefer the mystery.”

“This is the one that will grab those who were doubting what they signed up for. It still blows me away how they were able to combine those elements into something that works and feels so natural and organic. It is forcing itself out there with intensity, I also like the approach to heavily delayed and effected vocals. Getting to know them a little as people, and reading the text they wrote about this music, I know they are serious about their intent and message, but they don't need to be literal with it in the art, the presentation of words and vocal sounds has to fit the music and help set that dark hypnotic psych vision.”

“This track feels like a transition. One thing I notice in general on this album but specifically in this track is the revisiting of that fundamental infectious rhythm even in what seems like a drone or noise element, especially on headphones. And speaking of headphones, I can't recommend highly enough to anyone who reads this to jam it on some quality headphones. It’s a beast.”

“It’s pretty clear what that title represents. Such a killer track. I've seen them play several times with us in clubs, but I could see this happening somewhere where people are really letting loose. Altered states, fire, and dancing with abandon. It’s definitely more structured in a rock band sense, like that pulse from track 3 just exploded out of them as a punk band all of a sudden. I really wish I could see them in some Brazilian urban backyard or basement party, or, even better, some rural environment in Brazil where people are all raging together to this.”

“When I was in Brazil with Neurosis winter before last, we only had one night, they day we arrived where we were not playing. The Deafkids guys took me to eat some traditional Brazilian food and drink some traditional Brazilian spirits when they heard from a friend that there was an open street rehearsal for Carnival going on just down the road. This song to me reminds me of when we were still several blocks away but could begin to hear the drums. When we got there, it was mind blowing. Hundreds of drummers, all organised and in sync with these complex rhythms and syncopation, and the local dance troops and clubs were out dancing to rehearse on the street as well since the drummers were out. It was something unique for me to see. Everybody was dancing – not just the physically fit and people that the media considers beautiful, but everyone young and old shaking their stuff and dancing their asses off. There was no shame at all and it was beautiful. They bring that part of their culture to their punk rock; we could all learn from that.”

“The first time you hear a pulse at the beginning of the album, you could start to move and wouldn't have to stop for the entire album, even during the more abstract bits. And then it all begins to reform and take shape into songs like this one. This track is very insistent, the drums here sound as if they are voice delivering the message. Like some sort of code that all the other instruments respond to.”

“This track flows off the previous one seamlessly. I really like the way that this morphs the insistent call and response vibe of the previous track into something that dissolves into what sounds like nature and electronics simultaneously, as if the natural world had gained control of the electronics with its own sonic sense until it finally just stops – or more like grinds to a halt.”

“This one crawls out of that static [of the last track] with a ferocity. It’s super aggressive. This track crushes and would definitely drive a live audience into some sort of joyfully violent frenzy.”

“Track 11 is a brief, mind-numbing glitch in reality. I think that covers it.”

“This may be a bit obvious, but their drummer is amazing. He is what always makes me think of Ginger Baker and Fela Kuti. He has such a deep sense of the indigenous beats and flawlessly combines and layers them with European D-Beat/rock beats with the ease and fluidity of a jazz drummer. Having spent a lot of time in my past listening to percussive music from around the world, I am super impressed to hear him execute it like this. And the combination with the urgent noisescapes is something that I have always wanted to hear. It is a music that I didn't know I needed until I heard it – it’s a punk dervish whirlwind.”

“Somehow the static seems relaxing after their onslaught. I always meant to ask them if the 20 seconds of silence at the end was intentional, but I don't need to. I am sure it was. [At this point, Louder mentions we’d heard a high-pitched frequency where Von Till had heard silence.] There is a high pitched squeal? I definitely turned it up way loud in the headphones to see if there was something hidden – its obviously outside my range of damaged hearing!”

Metaprogramação is available now via Neurot Recordings. Catch the band on tour at one of the dates below.