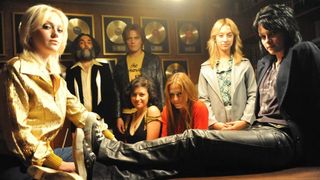 It’s a tricky business, pulling off a convincing and acclaimed movie about someone’s life, especially if the image of that someone has already been seared into the consciousness of millions of fans. Get it right, however, and you end up with a captivating five-star Oscar magnet, or at least a rollicking good yarn based on (sometimes merely “inspired by”) true events. Classic Rock offers up a chronological trawl through 10 of the best.

Director Ken Russell described 19th century Hungarian composer Franz Liszt as “the first rock star”, hence this typically outré portrait with Roger Daltrey hamming and glamming it up in the lead role. Rick Wakeman’s soundtrack includes synthesiser arrangements of Liszt’s works, and look out for a cameo by Ringo Starr as The Pope.

Hot off his TV success in Kung Fu, David Carradine plays another drifter of sorts, folk figurehead Woody Guthrie. Director Hal Ashby’s evocative dustbowl imagery in tandem with the power of Guthrie’s protests songs is compelling, and it was the first movie to use a Steadicam to film moving characters, fact fans.

Gary Busey was Oscar-nominated for his twitchy, geeky portrayal of the rock‘n’roll pioneer, and does a remarkable job in assuming the quirks of Holly’s singing voice. Purists should look beyond a few inaccuracies (Buddy only ever played a Strat, not a Telecaster) and lose themselves in an affectionate movie with thrilling music.

Nashville icon Loretta Lynn’s dirt-poor upbringing reads like a fiction, but British director Michael Apted draws on his own documentary filmmaker roots to give the story grounding and authority. Sissy Spacek bagged an Oscar and went on to record her own country albums, while The Band’s Levon Helm makes his acting debut as Lynn’s father.

Joaquin Phoenix is a moody and charismatic Johnny Cash in this retelling of The Man In Black’s ascent to stardom, although it’s Reese Witherspoon’s feisty portrayal of his missus June Carter that really catches the eye. T Bone Burnett oversees the music side of things, and director James Mangold’s script cherry-picks events from Cash’s many autobiographies.

Rock photographer Anton Corbijn’s directorial feature debut presents the troubled and tragically short life of Ian Curtis in atmospheric black-and-white, with Sam Riley in mesmerising form as the late Joy Division singer. Based on widow Deborah Curtis’s autobiography, and fleshed out with other intriguing tales from the post-punk Manchester scene.

Director Todd Haynes’ unorthodox biopic audaciously casts six actors to capture the many moods and perceived personalities of Bob Dylan, the film’s scattergun narrative liberally punctuated with classics from the great man’s catalogue. Cate Blanchett grabbed the headlines for her awards-laden turn, but Dylan himself described all the performances as “incredible”.

Aaron Johnson plays the teenage John Lennon, a conflicted youth at the centre of a tug-of-love between two strong female relatives. There’s a sharp-tongued delivery to the dialogue, referencing the future Beatle’s well-documented love of Goons-type humour, and a boyish nasal quality to the vocals that gives proceedings an authentic edge.

Based on the autobiography of the all-girl group’s singer Cherie Curie, but it’s the involvement of Runaways guitarist Joan Jett as historical consultant that drives a narrative rich in period detail. Dakota Fanning and Kristen Stewart as, respectively, Curie and Jett ooze surly attitude, and Michael Shannon is suitably creepy as manipulative mogul Kim Fowley.

The 21 best rockumentaries to stream on Netflix and Prime