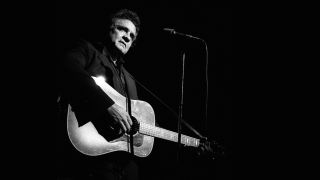 As a young boy, Johnny Cash was one of the first real storytellers I heard. My father had his records all around the house. And there’s just something about his sound that’s haunting. As a songwriter you have to learn how to tell stories, and he’s absolutely one of the best. He was also very innovative and his sound was so fresh. I mean, Luther Perkins wasn’t the greatest guitar player, but he figured out something that worked for him and that created their sound.

Jonny Two Bags [Social Distortion guitarist] and I talk about this all the time: sometimes we just wish we could’ve played in some Top 40 bands so we could’ve learnt to play and sing in different styles, and learnt how to do different things with our voice. But Johnny Cash and his band at the time, they only knew how to do what they did, and that was that primitive rockabilly thing. And it caught on. When you listen to a song like Cry, Cry, Cry or Get Rhythm, it’s so primitive, but it has this big backbeat that drives it along and it’s awesome. That’s inspiring to me.

I remember getting a lot of flack for wanting to cover a Johnny Cash song [Ring Of Fire] on the self-titled record [Social Distortion]. People kept asking me, ‘You’re gonna do a country song?’ And I was like, ‘Yeah, I’m gonna do a country song’, because I came from the school of punk and I strive for individuality. That means you do whatever you want to do, even if your best friend says, ‘You guys suck.’ You just do what you believe in.

You’re always going to be influenced by your surroundings, I’m not saying that, but I just feel that sometimes people forget that punk was supposed to be about being an individual. And for me, how I’ve always picked a cover song is I’ve sang a song at home for so many years already – because I love it – and I finally wake up one day and say, ‘Social Distortion is going to cover this’. That’s what happened with Ring Of Fire. And I feel happy to have been a part – and this was before the Rick Rubin records – of getting young kids to be hip to Johnny Cash, who weren’t already.

I met him when I was recording the White Light [White Light, White Heat, White Trash] record, and I still have the guitar that he autographed for me. He was in the studio next door, and I came out of the one we were in one day and he was there eating dinner. I didn’t want to take up too much of his time, so I just went over with a guitar and said, ‘Hey, we’re the guys that cover Ring Of Fire, would you mind signing this?’ And he did. He was very gracious. I mean, come on. He was Johnny Cash…