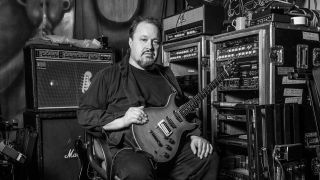 Home is… Sanctuary! It’s always good to come home from tour and do the shopping and all the mundane things that keep you grounded.

Earliest prog memory?
Listening to Alan Freeman’s Saturday afternoon rock show on Radio 1 and hearing The Knife by Genesis. I managed to tape the last half of it!

First prog record bought, and where?
A second hand copy of A Saucerful Of Secrets by Pink Floyd, from a little record store in Whitby around 1976.

Guiltiest pleasure in your record collection?
I used to love John Keating’s Space Experience [1972]. Synth versions of songs by the likes of Elton John and Carole King!

First prog gig attended?
Rush, in Birmingham. It was 1979, I think, during their Permanent Waves tour.

Fave piece of technology?
My MacBook. It keeps you in touch with the world, entertains you, and creatively it’s invaluable.

I have an unhealthy amount of guitar pedals…

What would your prog Mastermind subject be?
Photography. I’m just finishing up the first volume of my photo book, Postcards From The Road.

What’s your biggest prog extravagance?
My double-neck Steinberger guitar. I had it made – there’s only one in the world. It’s probably worth 20 grand now.

Favourite prog venue?
I’ve seen some great shows at the Hammersmith Odeon, but I just played the Junction in Cambridge, which has good acoustics and great sight lines.

Outside of prog, what are you into?
I like classic sci-fi movies like Blade Runner and 2001. I thought The Martian was very good. Outside of prog, I like songwriters – Joni Mitchell, Sufjan Stevens, Bon Iver.

Who is your prog hero?
I have three main ones – Andy Latimer, Steve Hackett and David Gilmour.

What do you collect?
I have an unhealthy amount of guitar pedals! Also, I’ve got nine cameras, and tens of thousands of photos.

What was the last prog album that you bought?
It was Pink Floyd’s The Endless River.

Best prog-related date you’ve ever had?
Well, my wife was a long-time Marillion fan and used to come to gigs. That’s how I met her!

Who in the prog fraternity do you call for a good night out?
It’d be the guys in my band – Dave Foster, Leon Parr, Yatim Halimi and Riccardo Romano. I meet Steve [Hackett] and Steven Wilson quite regularly too, but those are more civilised evenings!

What’s the most important prog song for you personally?
I remember being 16 and listening to Shine On You Crazy Diamond on a portable cassette player on the beach in Whitby, under the stars, and thinking, “This is what I want to do with my life.”

What prog album would you play to get you in a good mood?
Camel’s The Snow Goose.

Best prog artist you’ve seen live?
Peter Gabriel. I saw him in the early 80s and he was mesmerising – the energy and communication he had with the crowd.

Best prog book you’ve ever read?
I’d say Game Of Thrones but that’s pretty mainstream now! I can’t think of one prog book though. It’s probably too wide-ranging a genre for that.

You fave prog album cover?
Dark Side Of The Moon. It’s just so iconic.

What are you up to at the moment?
We’re in the middle of the new Marillion album. All the backing tracks are done. We’re off to South America at the end of April and we’ll finish it up when we get back with a view to a September release. The first volume of my photo book is with the designer at the moment, and I’ve been playing with my band, and helping my daughter with her music. I’m never short of things to do!