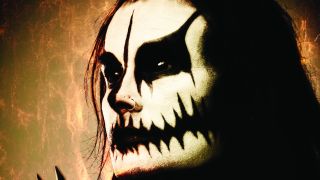 The phone bubbles. Tentacles slither from the technicolour touchscreen, the device a conduit for evil. This would be alarming were it a call from anyone else, but the man on the other end is Dani Filth: lyricist and screamer for Cradle of Filth and Devilment, occasional actor and purveyor of all things grim.

Cradle are amidst a slew of rereleases as of present; Dusk… And Her Embrace was unleashed in its Original Sin incarnation this summer gone, with coloured vinyl variants out now; From the Cradle to Enslave’s just had a saucy red re-release on wax and Devilment have unleashed their slathering sophomore effort, II: The Mephisto Waltzes.

After wiping primordial slime from the phone’s receiver, we asked Dani to talk about either My Life in 10 Songs or 10 Songs I Wish I’d Written. He did 5 of each. Asking him to stick to just one was a certain death sentence – have you heard that bit in Devilment’s Under The Thunder? He talks about claiming people’s scalps!

“That scream at the beginning was what inspired me to start screaming. I got Reign In Blood before any of my friends. I’d asked for it for Christmas; it came out around the same time as Possessed’s Beyond The Gates and Dark Angel’s Darkness Descends, and they were my three albums for Christmas. My Mum got an early import copy for some reason, so I had it two months before everyone else! Obviously I wasn’t supposed to open it, but I found it, took it out, recorded it then put it back! As soon as that scream came in, I was absolutely blown away. Amazing album.”

“Seeing as we just rereleased From The Cradle To Enslave on vinyl, I’ll say the title track. It bridged a gap between lineups and it was just a single, really, a vehicle for the video, which was the first time we worked with Alex Chandon and a precursor of sorts to the film Cradle Of Fear [in which Cradle of Filth appeared]. From The Cradle To Enslave was the band’s first video so we wanted something really special, and that video’s just nuts. That song in particular was a bit of a ground breaker for us, it got us a lot of attention; I think it’s one of the reasons why we got on things like Never Mind The Buzzcocks. It’s become a bit of a bugbear as well, as most good things end up being, because we always have to close our bloody set with it! After you’ve been on tour for seven weeks and it’s like, ‘You’ve still got to play From the Cradle To Enslave.’ Shoot me, haha!”

“Wish I’d written that. It’s brilliant. I’ve always dreamed of having my own soundtrack. Just imagine going into the Co-op, the doors open and you come striding in with that playing, just like, ‘All right?’ I want it played at my funeral too, with a legion of Stormtroopers carrying my coffin up to a waiting Star Destroyer.”

“Again, another of those stalwart songs you always have to play. The accompanying video, again done by Alex Chandon, was a bit like the Judderman adverts mixed with Sleepy Hollow. It’s one of those staple tracks by the band; if people don’t really know the band, they probably know Her Ghost in the Fog… for some reason.”

“I always say this, and everyone always looks at me and goes, ‘What the fuck?’, but I love The Eve of the War from Jeff Wayne’s Musical Version of The War of the Worlds. It’s my favourite album. I went to Jeff Wayne’s house for a day once – it was only supposed to be for half an hour, but I spent a whole day boring him about how much I loved the album! He wanted a rocker to take over Phil Lynott’s part when the opera singer, I can’t remember his name, had a brain tumour or something and had to drop out, but they ended up giving the part to someone else. Obviously I wasn’t right for the job – I had dreadlocks at the time – but I did go round his house and audition. His house should be called Wayne Manor, it’s bloody massive! He’s even got a tripod, unassembled and in bits, and I was just thinking he should have it above the house! Or above the gate, so you’d have to drive through it. It’d be amazing.”

“We haven’t played it live for quite a few years, but it’s an important song in the Cradle canon. It was in the Guinness Book of World Records for a little while! We were in it because this was the first ever DVD-only release to get in the Top 40 singles chart. Around that time, I was in a Mini garage buying a Mini for my wife, and Babylon A.D. came on the radio! It was weird because I’d just been talking to the guy at the garage about the band – I don’t go around telling everyone I’m in a band, it’s just he was trying to sell me something, and you know how they try and weasel every single thing about your life out of you. I’d been talking about that and then it came on the radio – it had to be played, and that was the best bit about it. Especially when they did the Top 40 and they had to play the whole fucking thing, because it’s nearly six minutes long! I love it when that happens. They had to do it with Sepultura and Slipknot, I believe. Babylon A.D. had a weird video by W.I.Z, who did videos for Dirty Harry and Marilyn Manson. It’s based on 120 Days of Sodom, which is a very dodgy film, so I was looking at the cast for the video and saying, ‘These all look a little young, W.I.Z,’ and he just said, ‘Oh, well, they’re old for what I wanted.’ Little close to the knuckle this, mate!”

“We covered it and did an all right job, but it would’ve been better if we’d just written it! It’s a classic song. I managed to get some special tickets for one of their gigs at Earls Court, when they were doing A Matter Of Life And Death in full, so we had to sit through the whole of that album before they played anything decent! They played five or six songs after, and it was literally a seven and a half minute walk from where we were to avoid everyone coming out; I think I was with Matt Heafy and a few other people who’re well-known, so we wanted to get backstage before the mob came out. Maiden had one song left to play, then [hums Hallowed Be Thy Name] and I was just like, ‘WOOOOOAAAAARGH!’ Seven and a half minutes! I stayed for like a minute before we had to go, but I sat through the whole of A Matter of Life and Death just to miss Hallowed Be Thy Name. Absolute nightmare.”

“It was a massive song for Cradle, and if we ever got away with not playing From The Cradle To Enslave, Her Ghost In The Fog or Cruelty Brought Thee Orchids, we couldn’t get away with not playing this. Weird thing is, it’s only the middle part of the song. We were on Roadrunner Records at the time and they chose it as the single, but they said we couldn’t have the whole song because it’s got two wings to it, almost like a triptych [Nymphetamine (Overdose), the album version, exceeds nine minutes in length]. It’s a song that, every album, the record company usually tries to, y’know… they never say it, but you know they just want us to write another one like that! I’m sure Metallica had that after Enter Sandman, or any band who has a big hit and tries to replicate it. But if you try and replicate something like that off the bat, it usually comes across as very contrived.”

“It’s the new single and it’s come out, strangely enough, around the same time that Tippi Hendren, one of Hitchcock’s blondes, has brought out a revelatory book about her involvement with the famous director. She’s totally slagged him off! She says he abused her, came onto her and was just quite a horrible person. It’s caused quite a bit of a stir, apparently… Anyway, the song namechecks ten of Hitchcock’s heroines, which I think is brilliant – I wish that could happen all the time, it’d save me writing out lyrics! It’s had a good reception and it’s the spearhead for the album; it’s quite catchy and I thought I’d drop it in because the album comes out on November 18th, same day as Metallica – woe betide them, haha!”

If I’d written Thriller, I’d be a multi, multil, multi billionaire having just penned the biggest song of all time. And I’d be a bloody great dancer, too.

Devilment are on tour from December 6.

The A-Z Of Cradle Of Filth

The 10 Best Cradle Of Filth B-Sides