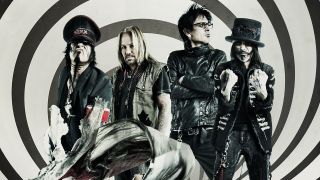 Nikki Sixx has revealed that he and his Motley Crue bandmates gave director Jeff Tremaine their blessing to go for broke on the upcoming biopic The Dirt.

It’ll premiere on Netflix on March 22, with a trailer for the highly-anticipated film and a video for the new single The Dirt (Est. 1981) launching last week.

And in a new interview with Classic Rock, bassist Sixx has revealed how important it was for the Crue not to whitewash their past in the movie.

Sixx says: “Netflix said, ‘Make the movie that reflects the book – and Jeff is, like, ‘I'm into punk rock and heavy metal and I want to make this movie of that book.’ Everybody right out of the box was just, ‘Go for it!’

“It was really important for us not to whitewash anything over. We know that there were scenes in NWA biopic Straight Outta Compton that were deleted because they just didn't want to be portrayed that way – and I don’t know if they sugar-coated anything in the Queen movie.

“With us, you've got four outrageous characters and it was important we didn’t pull any punches. I know the guys in the band – that's how we all think.”

The Crue signed a high profile contract meaning they would be sued if they ever hit the road again back in 2014 – but would they consider the occasional live performance now that they’re back in the spotlight?

Not according to Sixx, who tells Rolling Stone: “Sometimes I look out at my friends, like the guys in Aerosmith and Metallica, and I’m like, ‘God damn it, did we retire too soon?

“But there will be no one-offs in our future. Maybe we’ll just get together and jam in Mick Mars’ front room.”

The Dirt soundtrack will also be released on March 22 and features The Dirt (Est. 1981) along with new tracks Ride With The Devil, Crash And Burn and a cover of Madonna's Like A Virgin.

Motley Crue: The Dirt Soundtrack
The soundtrack to the long-awaited Motley Crue biopic The Dirt will launch on March 22 and features 14 classic Crue cuts along with four new tracks.View Deal