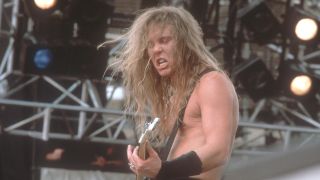 America had long been crying out for a regular hard rock festival. Fuelled on the memories of the 1970s California Jams, the Bill Graham Presents Day On The Green stadium bashes, and a legendary heavy metal night at the US Festival in 1983 – which hosted the likes of Judas Priest, Ozzy Osbourne, The Scorpions and Van Halen all gaining the sort of rave reviews which would become gold standards in their live careers – it was only a matter of time before someone devised a Monsters Of Rock for the US market.

The year was 1988, when word filtered through that there was, indeed, to be a Monsters Of Rock festival in the States. The hair was big, the riffs were bigger, and hard rock was enjoying enormous success in the US. In fact, it seemed that all you needed was a bit of tight denim, some scarves near yer mic stand and some pouffy locks to immediately get platinum status, so this was a logical, and seemingly bound-to-succeed, step.

Legend has it that this 23-city US Monsters Of Rock came about first as an idea of Sharon Osbourne, but that somewhere along the line of conceiving and arranging the concept, she decided it didn’t feel right. Thus, in came Van Halen and their manager at the time, Ed Leffler.

Having suffered the trauma and potential marketing nightmare of David Lee Roth’s departure in 1985, Van Halen had recruited ex-Montrose rocker Sammy Hagar to lead the charge with devastatingly successful results. Thus with their second Hagar album, OU812, ready for release in the summer of ’88, Leffler and company saw their moment to book Van Halen’s biggest ever tour into stadiums with the sort of bill that would have Head & Shoulders begging to sponsor.

Finding that perfect big band, who wouldn’t complain about playing right before Van Halen, would be tough, but The Scorpions were more than happy to take the slot.

More than likely the memories of that supporting US Festival stint were still fresh and, in hindsight, the German band were smart. With a new album themselves in Savage Amusement, the Scorps could enjoy the exposure without the pressure of leading from the front.

Behind them were Dokken, and with them one of hard rock’s great modern pantomimes, with singer Don Dokken seemingly always fighting with guitarist George Lynch. These two hated each other, but managed to check the negativity once they realised that their albums were going platinum.

Holding up one of the two bottom slots were a bunch of ragamuffins called Metallica. They'd caused a stir on Ozzy Osbourne’s US tour in 1986, and seemed to be a bit of an underground metal hit. Their new album, ...And Justice For All, steadfastly refused to entertain a conventional single, instead being a thoroughly radio-unfriendly offering.

Finally, opening the festival would be Kingdom Come; effectively The Darkness 15 years before their time, and ineffectively trying to channel Led Zeppelin through every riff – hence their unofficial yet adopted by all name, Kingdom Clone.

As was the way with the 1980s, Monsters Of Rock in the US was all about size and show. The eventual touring production would cart about a reported 971 tons of equipment and carry 250,000 watts of power, supplied by two sound systems weighing 440,000 pounds, suspended over a huge 168-by-60- foot stage, all transported by 51 48-foot trucks. Heavy metal? Very heavy indeed, we'd say.

The press conference to announce the tour saw the bands take their seats at a long table planted firmly in front of the Godzilla in Universal Studios theme park.
It was an early morning conference – not very metal – and the questions coming from the press corps were asked with the enthusiasm of a bunch of freeloaders who’d showed up for a free breakfast.

Herman Rarebell, then The Scorpions’ eccentric drummer, tried to entertain a few of the assembled reporters by eating one of the fake bananas on display – giving true context to that phrase ‘it’s the thought that counts’. The most memorable moment came when someone asked The Scorpions a question which required them to remember Van Halen bassist Michael Anthony’s name, and as Rudolph Schenker stumbled over this, stuttering “Michael... Michael...” Metallica drummer Lars Ulrich leaned into his mic and proudly blurted, “Schenker!” to a loud chuckle from the room.

Yes indeed, pickings were slim. In fact it should’ve been a forewarning of the tour to come, where the young upstarts – namely Metallica – proved themselves unafraid to take a pop at the old, established rock legends.

And so it came. Monsters Of Rock. To a stadium near you. The whole thing looked well-conceived and well-assembled... the only problem was that the upper half of the bill just couldn't deliver what one band on the lower half of the bill were delivering. That is to say: raw, crisp, fuck-you-festival-style energy.

As Metallica’s reputation quickly escalated, so the crowds came earlier and earlier, until very soon there were 40-50,000 people inside at 3 o’clock in the afternoon, ready to hear them lay sonic waste to whoever was in the way.

The tour’s most extraordinary feat was how, on Kingdom Clone’s departure, within 30 minutes, tens of thousands of people streamed in and started hooting and hollering like the headliners were about to come on. They weren’t, of course – and for the first few shows, the arrival of all these baby headbangers to see the scruffy rookies that were Metallica ’88 was viewed as almost cute by the bigger fish at the top of this food chain.

But by the time the tour rolled through Detroit’s Pontiac Silverdome, it was abundantly clear that this ‘small fish’ had the appetite of Jaws, gorging on audience energy and returning it tenfold. Indeed, as thousands and thousands of fists pumped the air to signal For Whom The Bell Tolls, Monsters Of Rock 1988 suddenly became the tour where Metallica were destined to become the proper rock monster and Van Halen could do nothing, night after night, to stem the charge of this Godzilla.

By the time the tour reached the Los Angeles Coliseum, people were getting pissed off that Metallica only had a 60-minute set. This culminated in a riot at the Coliseum as fans stormed the field from the stands to get closer to the band. Soon, arses were engaged in hauling seats everywhere as opposed to sitting on them. It’s fair to say that this punk-like energy was not what the promoters had fully expected.

Subsequently, when Van Halen came to close the show, it was a little more than they could handle. Always a fine live act, there just seemed a little too much snap-happy-doo-dah about their performances, at times more Jimmy Buffet than Jimmy Page. And anyhow, they were dealing with a seriously flagging crowd by then. Of course, you might question the wisdom of a two-hour-and-20-minute set that included solos, but hey, rock’n’roll baby; in the land of leather pants and egos, no headliner could be seen playing a minute less.

Van Halen did their damnedest to make everyone feel welcome – particularly Metallica, with whom Sammy Hagar got a little obsessed. Crowds came out to play, and right now it’s tough to remember why Monsters Of Rock ’88 wasn’t considered a success that ended up spawning a regular festival.

Perhaps America simply wasn’t quite ready to embrace a travelling concept like this. After all, when Ian Astbury tried to assemble the Gathering Of The Tribes the following year it fell apart after a few dates. It did open the door for Lollapalooza, but this, too, had limited shelf-life.

In fact one of the only true touring rock festival to annually succeed in American history has been Ozzfest, which actually feels like a Donington or Reading circa the early 1980s as opposed to a headline act with some support bands in a stadium.

And the fact is, when people look back at the US Monsters Of Rock ’88, they invariably end up trying to remember it for a while before exclaiming: “Oh yeah, didn’t Metallica do that one?”