Skip to main content
Sponsored
Louder is supported by its audience. When you purchase through links on our site, we may earn an affiliate commission. Learn more 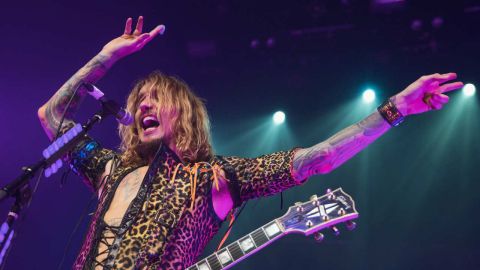 The Darkness's Easter Is Cancelled tour will hit The UK from November.

"Join The Darkness in their mission to take back control from the fools and liars who purport to lead us, and instead march forwards into the sunlit uplands of inclusivity, togetherness and rock’n’roll fellowship," say the band.

Tickets are on sale now

Justin Hawkins, frontman from Britrock legends The Darkness, still remembers how he first got into music.

“When I was 11, my grandmother came into some money because she had lived a long time. It was one of those situations when you get ‘Congratulations, you’ve made it to this old age, so here’s some money’.

“She gave me cash to go out and buy whatever I wanted. You know what I did? I bought a ghetto blaster and tapes, and really immersed myself in music. It was the sort of age when you discover music and get turned on by it.”

When it came to selecting these 10 albums, Hawkins had a very direct and straightforward approach.

“My priority was to go for the ones I have listened to the most. And continue to listen to. Because if you listen a lot to any record then it must affect your life!”

And it has. The band are now gearing up for the release of their sixth studio album Easter Is Cancelled, and the tour that follows (full dates below) threatens to provide the usual riotous mix of high camp and righteous rock'n'roll.

“The Darkness are joyous warriors, here to prick the pompous and kick the arses of those who seek to destroy us," say the band. “Easter Is Cancelled sees the four maestros embark upon their most ambitious quest to date with their musical opus soon to be thrust into the ear canals of rock fans around the globe, and a tour that will quite literally resurrect the souls of all who attend."

Below, Justin selects the 10 albums that changed his life.

“When I was growing up, I heard a lot of compilation albums being played by my parents. One of these was Abba Gold. That got me into the band. In the end, it was tough to choose between Arrival and Voulez-Vous, which came out three years later. There are two reasons why Arrival wins out.

“Firstly, ever since The Darkness got into a position where we needed an intro, we’ve used the song Arrival itself. So, I hear it every night, and it’s become a part of my life.

“Secondly, there’s a helicopter on the album cover. That’s cool in itself. But what I recently had done was a photo with myself, my wife, my child and dog put into the cover shot in place of the band, all of us standing by the helicopter. That has pride of place in my lounge.”

“I was 14 or 15 when The Razors Edge came out, and I loved it. In fact, I would listen to the album and tried to learn the guitar parts. Then somebody told me that if I really wanted to hear proper AC/DC, then I had go back and check out the Bon Scott era. So, that’s what I did, and this has now become my favourite AC/DC album.

“It also changed my approach to everything. From then on, I wanted to be a combination of Bon and Freddie Mercury. To have Freddie’s vocals with Bon’s attitude. And Bon is the reason why I still used a microphone with a cable. Because he just looked so cool with it. I tried a radio mike, but it didn’t have the same feeling. For me, when it comes to AC/DC, you cannot better Powerage.”

“You know, it’s amazing how quiet this album sound when you play it now. That’s down to old fashioned mastering. It was mixed by Bob Clearmountain – what a great name, because Reckless sounds like his surname! I always think the name ‘Clearmountain’ is so Dickensian as well.

“But every song here was either a single, or sounds like it should have been released as a single. It’s just amazing. And Tina Turner’s here as well on one song, It’s Only Love.

“Whenever I play this album, it sounds familiar, beautiful and like bathing in warm water. A bath of ‘Clearmountain’ water!”

“I know there are those people who don’t like anything Aerosmith did after the 1970s, but I am not one of these. I have to say I love Permanent Vacation, which was the band’s previous album. But the reason for that was I went into Andy’s Record Shop in Lowestoft and they were selling a Permanent Vacation T-shirt, which was very colourful and caught my attention.

“But the reason I adore Pump is that it’s another one of those albums where each song is great. I also the way they used segue music to link the tracks.”

“I had to have a Cardiacs album in there. It could have been anything from this era. It was a close run thing between this album and On Land And In The Sea, which was their next release.

“What I love about the Cardiacs is they are so weird and refuse to conform to what other people feel is normality. They have always been individual and done their own thing. That’s why there are a lot of bands out there who claim to have been influenced by them.

"What I learnt from this band was the value of sticking to your guns and going after what you want to do, rather than being told this is how something should be. It put them out of the edge.”

“I know a lot of supposedly diehard Cult fans hate this, because it sounds too much like AC/DC. But two things: firstly, if you are a diehard fans of any band, then you accept what they do. And secondly, this sounds like good AC/DC, so how can you go wrong with that?

“It was produced by Rick Rubin, and he did the very first album I ever bought, which was Raising Hell from Run DMC. In fact, he’s produced a lot of the albums I love. Makes me wonder why we’ve never worked with him, but that could happen in the future! Electric, though, that is a fine album, whatever other Cult fans might think!”

“Yes, I have put in our debut album. Think about it, I am supposed to be listing the records that changed my life, right? And nothing changed my life as much as this album did. Without what happened to the band as a result of Permission To Land, I wouldn’t be where I am today. I wouldn’t be doing what I am. So, this definitely has to be in there. It was an important part of what has happened since to me.”

“There are three reasons why I have to have this Led Zeppelin album included above all the others. They are Heartbreaker, Living, Loving Maid (She’s Just A Woman) and Ramble On. They are The Father, The Son and The Holy Ghost when it comes to the songs I want to listen to when the sun is out. They’re the holy grail of sunshine listening for me.

“Whenever I am in the car and the sun is out, these are the three songs I want to have on. They are the soundtrack to great weather, wherever I am in the world. From LA to Lowestoft.”

“Of course A Night At The Opera is brilliant. But what I recall as a kid was that my brother and I would throw around the vinyl copy of that album as a frisbee. There was never any disrespect intended, but that’s just what happened.

“Now, Jazz… that always seemed to be on the turntable whenever my parents had a party. It’s one of my earliest memories of those parties, actually. So, in a way I was brought up on it. Of course, the fact that there was a poster inside the album with lots of naked girls riding bicycles has nothing whatsoever to do with my love for this album. It’s all about the music to me!”

“It’s a toss up for me between this album and Exile On Main Street. They’re both great. But Sticky Fingers wins out. I recall going into Andy’s Record Shop in Lowestoft and seeing this in the bargain bin. I thought, ‘What the hell? It’s so cheap I can’t go wrong buying a copy’. And I loved what I heard.

“It’s never easy to pick a favourite Rolling Stones song – how do you do that with so may to choose from? But Can’t You Hear Me Knocking from Sticky Fingers would be my choice.

“There’s also another reason to go for this. It brings back memories of Frankie (Poullain, Darkness bassist) and me driving around in a Volkswagen van in Costa Rica, climbing up the side of a volcano. And we listened to this all the time. It was perfect for that trip. So, if you are planning to go climbing up a volcano, then this is the album to take with you.”