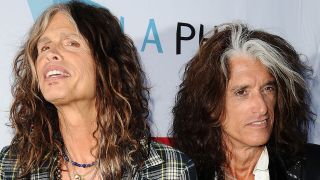 Aerosmith guitarist Joe Perry hopes his Toxic Twin sidekick Steven Tyler will be able to live with the contents of his upcoming book.

Rocks: My Life In And Out Of Aerosmith is to be published in October – and Perry admits it’s taken about a year longer than he thought it would.

He tells Rolling Stone: “I’ve wanted to write for a while, but Joey Kramer put his book out, and I wanted to leave some room there. Then Steven put his out. I didn’t want to make it seem like mine was an answer to his, so I waited a little longer.”

The guitarist knows there’s more than one possible version of events. He says of Tyler’s Does The Noise In My Head Bother You?: “It’s definitely Steven’s truth. No doubt about it. He’s allowed to perceive things how he perceives them.”

But he continues: “I didn’t agree with a lot of the things he said. I know he worked hard on it – but it’s got a totally different tenor and energy than my book. Mine tends to be a little more traditional; it’s an autobiography in the real classic sense.

“I just hope Steven accepts the things I say about how I felt and how I saw things happen. I don’t put words in other people’s mouths or talk about conversations that I wasn’t there for.”

Perry believes lot of the band’s history has been clouded by other people taking control of the story – and he cites 1997 title Walk This Way: The Autobiography Of Aerosmith as an example.

“That book was a swan-song to our last manager,” he says. “He told the writer that unless he got to read and edit it himself before the band saw it, he would not have any access to the band. This was unbeknownst to us – we found out afterwards.

“We were all invalid and ready to get our stories out there. But we lost sight of the bigger picture.”

Aerosmith headline the Download festival at Donington next month.