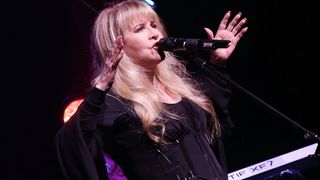 Stevie Nicks says she hopes to continue working into her 90s.

The 68-year-old recently laid out plans for her North American 24 Karat Gold Tour, which follows the Fleetwood Mac singer’s 2014 album 24 Karat Gold: Songs From The Vault.

She reports that she’s made a provisional list of 31 tracks for the tour, and jokes that squeezing that many songs into a live set could be a problem.

Nicks tells Rolling Stone: “We’re gonna go on for like two hours then we’re gonna go and do what Prince would, which is then go find a club and play the other 14 songs! It’s all a lot of fun.”

Reflecting on the death of Prince, who died in April after an accidental overdose, Nicks adds: “I feel really sad that Prince’s journey didn’t continue until he was 95.

“I think that for most of us, we’re all gonna live to be in our 90s. So a lot of this creativity and all the things I want to do when this part of my life starts to go away a little bit, then I’ll be sitting down at an old typewriter that I’ll dig out of my storage unit in Phoenix and I’ll start writing stories.

“I’ll start working on movies. There’s so many things I want to do that this is just a part of it all. That’s all I can tell you.”

Nicks’ run of shows will kick off in Phoenix on October 25 and wrap up in Inglewood on December 18.