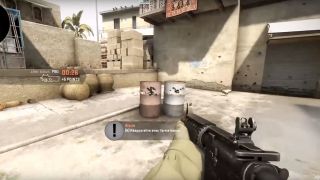 Everyone’s favourite electronic noisebotherer The Algorithm has recreated Meshuggah’s track Bleed using a variety of gunshots from the game Counter-Strike: Global Offensive. As you’d expect, the technical wizardry of Obzen has been replaced by the even more violent sounds of assault rifles and other automatic weapons. Whether you’re firing at barrels, tyres, walls or windows, the variety of sounds at your disposal in Counter-Strike: Global Offensive are subtle but many.

Of course, it probably could have been improved by shooting a drum kit, but what are the chances of finding one in a war zone?

We’re off to recreate Dream Theater’s back catalogue using nothing but Crash Bandicoot.

Every Meshuggah album ranked from worst to best