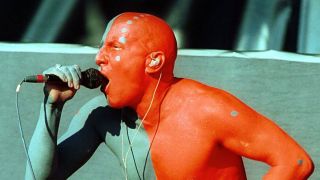 We're keen find out what’s going on in the mind of Tool and Puscifer frontman Maynard James Keenan.

“I always knew that I wanted to be an artist. I never even thought about it. It was always there in the back of my head. We had those forms in school, just stupid forms you had to fill out where they asked you all sorts of things. For example, what you want to be when you grow up. There were a lot of choices to make and I always picked artist. I never once picked doctor, lawyer, fireman or something like that. It was always artist.”

“I started Puscifer when you couldn’t really see Puscifer through to the end because of the nature of the industry and the economy. This thing started in the mid-1990s, and you couldn’t make a video; you couldn’t do animation then for less than half a million dollars. You just didn’t have the technology; you didn’t have the computer programs to just kinda do the stuff at home. I mean, if you wanted to make a video, you had to hire a director of photography and you needed a craft services table and all that stuff. Now you can do it all on your iPhone. So there was an interim when I had to wait for the industry and for technology to catch up so I could do what I wanted to do with this project.”

“People were bitching at me while I was in the hospital [recovering from hip surgery] to get back on the road. I was like, ‘Fucker, I’m in the hospital because of the road, so go fuck yourself and get some perspective. I’ve done more in a week than most have done in a lifetime’.”

“When I joined the military I believed we’d found some kind of groove as far as world peace. We didn’t really have any major conflicts. We were going through a lot of growing pains as a nation. I don’t know that I would recommend active service right now. What I embraced is that warrior’s mindset. You’re competing against yourself and understanding that you have to be able to get into that mindset in certain situations. At the end of the day, you’re competing against yourself.”

“[Tool] are not just bandmates – bandmates don’t necessarily stick with each other – we’re family. You can move through friends and walk away from them if they try your patience, but with family, you’re with these people and you have no choice. You’re with these people, and you really have to force yourself to work things out.”