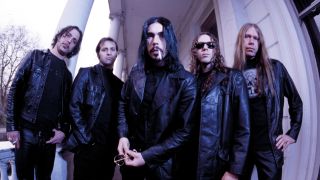 What were your expectations for Monster Magnet when the 90s began?

“I didn’t really get that Monster Magnet would be anything more than a labour of love until about two years into our success, if I’m honest. I was like, ‘What? They’re really buying this?’ I couldn’t believe it when people started to give a shit.”

Were you a grunge fan when that scene was exploding?

“I loved the punk rock attitude when it started in the late 80s. It was still an old-school, punk rock way of thinking. I’d been out of a band for six or seven years, just working in a comic book store, and then I heard stuff like Screaming Trees, Mudhoney and early Soundgarden, and I was like, ‘Fuck, I’m back in!’ That’s really when Monster Magnet was born.”

1998’s Powertrip was a big, dumb, bombastic rock album… was it as ambitious as it sounded?

“No, it was really a last-ditch attempt to stay on a label. If these label assholes want us to sell records, I didn’t know any other way, you know? They were complaining about record sales because we’d made these long, varied, psychedelic albums and apparently variety wasn’t a great idea. Powertrip was as much about the attitude as it was the music. I was shocked when it worked.”

Exactly how crazy was the tour after that album?

“That’s when I started to totally embrace every stereotype that I’d ever wanted to live out as a child. Fuck indie cred, I was gonna be the guy I wanted to be when I was 17. I’m gonna wear leather pants. I’m gonna put my dick in a hot dog roll and serve it up to anyone who wants it… let’s go! It’s a dream come true and I think part of the dream was to crash and burn, ha ha! That seems to be the obvious ending to that movie, right?”

Is it reasonable to guess that you weren’t a fan of nu metal?

“Oh, I thought it was the worst shite in the world. This was just bubblegum hip hop metal for kids. It just happened to come at a time when it got in my way, so I hated it! It was so obviously fucking stupid and babyish. But everyone has their own glory days, and you can’t argue with that.”

What’s your favourite album from the 90s?

“Most of my favourite albums in the 90s were weird ones. Under The Pink by Tori Amos [1994] is an incredible album. It’s really good; it’s like if Elton John had some weird sister, but she kinda sounds like Kate Bush. Other rock bands were competition, so I don’t want to say nice things about them, ha ha ha!”