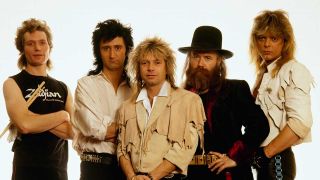 In their late-80s prime, Magnum were all about big, bold pomp rock; the makers of grandiose music that demanded absorption in its flights of fancy. To those who couldn’t make the leap with them, they were an innocuous sight, a bunch of middle-aged Brummies in perms and leather trousers, singing about wild swans and sleeping lions.

Slightly out of place, Magnum felt slightly out of time, too. Their big break, forged by the success of their best album, On A Storyteller’s Night, came just too late. When they finally got to LA to make a big-budget record, it was 1990 – Nevermind was released a year later.

Although things never quite fell into place commercially, Magnum succeeded artistically on their own, singular terms. Guitarist Tony Clarkin, who has written their entire catalogue, has produced some gems that stand up against anything else in the genre. Bob Catley’s singing has been as underrated as Clarkin’s songwriting. Together they’re a perfect fit.

Having started out in 1972 as a covers band, they really hit their stride four years later when they began playing Clarkin’s songs and building a following at a local residency. The band were a big live draw long before they had a record deal, and their reputation grew further when they supported Judas Priest on the latter’s Sin After Sin tour.

Magnum signed to Jet, the label owned by Sharon Osbourne’s father Don Arden. Over the next seven years they supported Whitesnake, Blue Oyster Cult, Def Leppard and Tygers Of Pan Tang, and released four studio albums and a live set that troubled the lower reaches of the charts.

They had become nearly men. The Jet deal lapsed, and it looked for a while as though Magnum were finished. Clarkin endured a period of serious illness and Catley considered looking for a new band to join. Yet at his lowest ebb Clarkin rallied, picking up a guitar and writing the songs that became On A Storyteller’s Night, the album that transformed their fortunes.

Even the departure of longtime keyboard player Mark Stanway in 2016 didn't stop Magnum - 2018's Lost On The Road To Eternity was one of the band's most successful albums to date.

Magnum have endured, and they’ve built a catalogue that has sustained a following for four decades. They’ve never chased trends, and so have remained free of their demands. And along the way they’ve produced some of pomp rock’s best moments.

Magnum's new album The Serpent Rings is out now.

With things so close to falling apart, everything came together on an album that offered the perfect coalescing of music, themes and imagery. The songs split easily into two types: epics like How Far Jerusalem, the title track and Les Morts Dansant; and terrific pop rockers such as Just Like An Arrow, Two Hearts, Steal Your Heart and Before First Light.

There was something human and touching about those songs. Here was an unworldly album that the listener could become entirely lost in, only to emerge, blinking and guilty-pleasured, an hour or so later.View Deal

On A Storyteller’s Night got Magnum a major-label deal, and their second album for Polydor was a suitably grand response to their improved circumstances. Wild Swan was a particular high point. In many ways it contained all of the strengths and weaknesses of the band; a magisterial, lofty tune that could sound equally daft out of context.

Clarkin nailed the pop songs too: Days Of No Trust and Start Talking Love made the Top 40, a remarkable revival for a band who’d almost perished a few years before. Most interesting of all were some less immediate songs: Pray For The Day and One Step Away added depth to an album with plenty of breadth.View Deal

Easily the most commercially and artistically successful record of Magnum’s years with Jet, Chase The Dragon’s baroque fantasies held together well.

Clarkin’s favourite themes were quickly establishing themselves: there was an antiwar song in opener Soldier Of The Line, a lighters-out crowdpleaser in Sacred Hour, and a couple of precursors of better songs that would appear on …Storyteller’s Night, The Spirit and The Lights Burned Out. Heard in the context of later releases, Chase The Dragon the album is the sound of Magnum carefully sketching out their future.View Deal

Vigilante offered an excellent set of songs – Lonely Night and Midnight (You Won’t Be Sleeping) are from Clarkin’s top drawer – but they were mired in a bizarre production job from Queen’s Roger Taylor, and distributed in a cover better suited to My Little Pony toy packaging.

It was a case of what might have been. Taylor had the synthesisers so high in the mix they maxed out the parp factor; keyboard flourishes on the title track sounded like a rampaging church organist. The fact that Vigilante stood up to this assault had much to do with the well-crafted songs and the consistency of Catley’s singing.View Deal

This was Magnum’s shot at breaking America. The band travelled to LA to work with Keith Olsen, who had produced hit albums for Ozzy Osbourne, Whitesnake and the Scorpions. Jim Vallance and Russ Ballard were also brought in to write with Clarkin.

It was heavy artillery. But in trying to broaden their appeal they simply diluted everything that made them different. Rockin’ Chair was a rambunctious start, Only A Memory and Heartbroke And Busted oozed melody, and much of the rest was lustrous, high-end radio rock, but it lacked the quaint twist of Englishness that marked them out. A parting with Polydor soon followed.View Deal

Revitalised, rededicated and with a fine album in Brand New Morning (2004) behind them, Magnum produced a late-career highlight in Princess Alice And The Broken Arrow. There’s a nebulous concept revolving around the title character, but the songs stand powerfully on their own.

When We Were Younger is tremendous, Magnum at their best, as is the closing You’ll Never Sleep. They bookend Like Brothers We Stand, Out Of The Shadows and Dragons Are Real, all lengthy, epic pomp rockers that Magnum do beView Deal

Lost On The Road To Eternity (Steamhammer/SPV, 2018)

You have to admire the relentless perseverance of Tony Clarkin and Bob Catlin, the creative core of Magnum who, as they strut proudly into their seventies, are still keeping Tolkienesque sleeve designer Rodney Matthews busy at a rate of more than one album every other year, and touring with a tenacity that would exhaust many men half their age.

The quantity isn’t watering down the quality, either. Yes, these 11 songs could have been released in 1987 as easily as in 2018, but who cares, when Peaches And Cream has a chorus so instant it’s an ear worm before it’s even finished, and the Smoke On The Water-style riff of Storm Baby is impossible to resist.View Deal

The Kingdom Of Madness album was recorded in 1976 but it stayed in the can for almost two years. The delay cut both ways: 1978 was awash with the newly emerging punk rock, so an album of proggie sci-fi songs was not about to reshape the musical landscape. But Magnum had toured hard while they waited, and the album found its home among fans who were already familiar with the songs.

It’s something of a period piece now, but there were hints of what was to come via In The Beginning’s strong melodies and in the boiling riff to the title track. From the start, Magnum had struck out in their own direction.View Deal

Beset by financial constraints that put Tony Clarkin in the producer’s chair, and rows with Jet records that delayed its release, The Eleventh Hour is a troubled record, full of weighty, world-weary songs. At times it seems to be aping Chase The Dragon’s blueprint: The Prize and Vicious Companions rewrite The Spirit’s acoustics, while other tunes were baroque and complex.

Clarkin’s natural ear for a pop tune was evident on Hit And Run, but it was a rare carefree moment. Magnum would face more travails before they found the vision that made …Storyteller’s Night such a huge step forwards.View Deal

Bob Catley described the lyric to Brand New Morning as “Like the first day of the rest of your life. Just wake up and start living.” Such philosophy was hard-won. Magnum had survived their late-90s dissolution and were slowly regaining lost ground.

Their comeback record, Breath Of Life (2002), was strong, and Brand New Morning was stronger still, a fine combination of epic moments like the title track and The Blue And The Grey, and more introspective songs like I’d Breathe For You. The imagery was apocalyptic, but Magnum’s vibe was earthier and more vital than it had been for a decade.View Deal