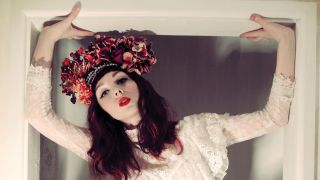 Confessions Of A Romance Novelist is the debut album from The Anchoress, the recording and performing alias of singer-songwriter, multi-instrumentalist and all-round maverick Catherine Anne Davies.

It’s not the first thing she has done – there were records released previously under the name Catherine AD, she’s been part of a supergroup called Dark Flowers alongside Jim Kerr of Simple Minds and Peter Murphy of Bauhaus among others, and she has been touring the world for a year or more with Simple Minds. And let’s not even get started on her part-time job giving Chrissie Hynde tips on social media and her post lecturing to undergrads about homosexual poetry.

Actually, front-loaded as it is with awkwardly accessible would-be hits, with a more meditative “second side” suite of music, the model is Kate Bush’s Hounds Of Love, only updated for the 21st century.

I’m not po-faced and serious in ‘real life’. I don’t really have a secret stash of body parts in my bedroom.

“That’s the biggest compliment I could get. That’s what I wanted it to be. If I’ve got anywhere near achieving that, it’d be amazing,” says Davies, who admits she based the shape and structure of Confessions… on Hounds. “Side 1 ends with the song Popular, and then there’s a whole section where the tracks all bleed into one another like [Bush’s] modern classical abstract piece The Ninth Wave, and Chip On Your Shoulder is like Jig Of Life, if you want to continue the analogy.”

Davies grew up in Wales, steeped in her parents’ Carpenters and 10cc, ELO and Yes albums. Her earliest prog memory, she says, was the time her father – a paramedic involved in amateur theatre who sadly died during the recording of Confessions… – did the lighting for a Rick Wakeman show.

She calls herself a musical autodidact, learning to play multiple instruments as well as the rudiments of production. A brainy type, the PHD in “queer theory” describes her album’s overall concept as “deconstructing normative ideas of love and romance”, with each song sung by a different character – “what you might call a musical ghost-writing of sorts”.

She has another term for the album’s contents – ‘revenge pop’. One of the tracks is titled P.S. Fuck You. Revenge on who?

“All those people who didn’t think I could do it,” she replies. “Isn’t that what all musicians are doing? To prove people wrong. “I hope people pick up on the fact that it’s meant to be a funny record,” she adds, alluding to the title track. “There’s lots of dark humour and occasions when I’m trying to make Paul [Draper] laugh in the studio. I’m not po-faced and serious in ‘real life’. I don’t really have a secret stash of body parts and a shrine to Margaret Thatcher in my bedroom.”