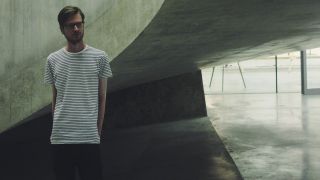 Burton-on-Trent in the Peak District is justly famous for its beer. Its many breweries pump out millions of pints
of frothing ale each year. It’s also a major producer of that mainstay of British beefy beverages, Bovril. Burton is perhaps less famous for producing post-minimalist soundtrack music raved over by Hollywood composers. Until now. Steve Gibbs may be a self-effacing and modest young man who speaks with a warm East Midlands twang, but his music – part post-rock cool, part Keith Kenniff ambient – is arguably on the verge of remaking Burton’s ale-and-industry image.

The rest, as they say, is history. Reynolds used his Royal College Of Music colleagues to play his striking string arrangement over Gibbs’ piano. The resultant EP collaboration made several Top 10 lists in 2013. Like so many modern musicians, Reynolds and Gibbs collaborated across the distance of the internet: Gibbs in the Peak District and Reynolds in London. “The whole time we wrote the music and released it we never met,” says Gibbs with a smile. While the pair have since hung out together, their relationship is all about the music.

Crucially the In Passing EP gave a real boost to Gibbs’ career, drawing not only international attention and ad and film work, but also made Adrift the rich and confident album it is. Its piano-driven sound channels the spirits of Ólafur Arnalds and Einaudi as well as the more proggy post-rock work of This Will Destroy You.

For a soundtrack composer, Gibbs’ route to success has been unconventional. His background is in Art and Design and as a musician he’s mostly self taught. “I had keyboard lessons when I was very young, but when I got to 10 I decided I wanted to be a rock star.” While he’s moved away from being an old school rocker, working in bands meant, as he puts it, “I finally got to the stage where I was able to learn things more by ear.”

Gibbs’ journey into a proggy, post-rock sound was also unusual. “When I got into hip-hop – acts like DJ Shadow, you know, instrumental hip-hop – I could begin to hear all the different styles of music he was sampling and I wanted to go back and listen to those artists that he’d sampled.” DJ Shadow might not be conventional prog territory, but with samples from the likes of Stanley Clarke’s Concerto For Jazz to Giorgio Moroder, as well as Roger Waters, it’s certainly fascinating stuff. “Tool also taught me a lot about the use of different time signatures in songs,” he adds.

These days Gibbs is less interested in brutal riffs than music which lets the listener lose themselves in wide open spaces. “I’m generally a laid back and very quiet person,” he says, and on Adrift he achieves a sound which gives the listener permission to relax. But this is still intense music, something which reflects the composition process. “What I tend to do is try out as many ideas as possible and then start to strip back, so that it’s in its simplest form. It’s a fine line between having all these interesting layers going on and over-cluttering it.”

Sometimes ambient music – even in the hands of masters like Fripp and Eno – is accused of being mere wallpaper. Indeed, Eno famously took this to task when he wrote Music For Airports. Gibbs himself avoids the easy listening tag with aplomb. Part of this lies in his gift for interpretation. He has the soundtrack composer’s gift of capturing emotion and thought in a concise and crisp way.

When asked if he was open to working with Cyrus Reynolds again, Gibbs says, “It’s something we keep mentioning. But it’s a matter of time and fitting everything in. And I’m at that point where I’m ready to write new music.” Given the developments in both their careers since 2011, the results may well be sensational.

However, on the evidence of the newly remastered Adrift Gibbs may not be short of potential collaborators to take listeners to beautiful places. More than that, chances are he’ll be getting calls from Hollywood soon to add to his burgeoning solo career.

Sounds like: Sigur Rós on holiday with Max Richter and a box of electronic magic

Current release: Adrift is out now on Injazero Records