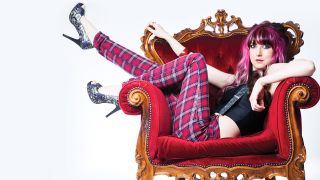 Kim Seviour has not had it easy. Just over two years ago, the singer was forced to quit Touchstone after eventually succumbing to ME, or chronic fatigue syndrome, which left her too exhausted to rehearse and tour. Then last year, the English vocalist’s long-standing battle with depression and anxiety combined with the condition sparked a breakdown, and she was left “incapacitated” for a period of time as she stayed with family.

But she hasn’t given up. Despite still suffering the taxing effects of ME, Seviour has just released her debut solo album Recovery Is Learning, where she has distilled her gruelling experiences into song alongside prolific prog aficionado John Mitchell, who serves as co-writer and producer. It’s both introspective and outward leaning, with the music often steely with rock hues before dissolving into angelic, celestial melody and soundscapes.

‘I will never fly until I learn to fall,’ Seviour sings in lead track Chiasma as she appears to reflect on her struggles. ‘Where will I land? Let the clouds embrace and guide me through the air.’

The album is a record of two halves, with the vocalist penning the first set of tunes before she had her crash last year, which ultimately brought the process screeching to a stop. The second half, meanwhile, is a reflection of how she tried to lift herself out of one of her darkest moments.

“I had the ME when I started writing the album, but it was from a positive mindset of ‘I believe I can recover, I believe other people can recover from different things, I’d like to pass on what I’m learning,’” she says.

“I was in a very, very positive place. The first few songs that I wrote were very philosophical but in a good way, putting a positive message across.

“I then got ill and had what can only be described as crash or a breakdown half way through, which I’m still coming out of, for the last six or seven months.

“The album writing was halted as well. The second half of the album was me writing what I was going through with the depression that came with it, just trying to climb myself out of this hole that I had somehow fallen into.”

With Lonely Robot and Frost* man Mitchell on board to help form the instrumental side of the record, there is a considered panache streaming through the nine tracks. Don’t expect many wild theatrics, though, with Seviour from the school of thought that prog, and music in general, may be best served when focusing on feeling rather than any eccentric, outlandish over-exuberance.

Her influences range from Enya to melodic metallers Flyleaf and Muse, but her appreciation for thinking outside the box is deep-rooted, and can be attributed to her prog-loving dad inviting her into the world of staple acts like Genesis when she was younger.

Seviour joined Touchstone in 2007 and they enjoyed a quick rise to notoriety, landing gigs in the US and Europe as well as across their native UK, but four albums and eight years later she had to call it quits as ME took control of her life. The chronic, neurological condition – which is often thought to attack after a viral infection – can leave people bed-ridden, floored with muscle pain and hazy with brain fog. For Seviour, it meant that life in a touring band was over.

“It did get to the time when I knew that it was the right thing to do, so in a way, when you get to that time with anything, there is an element of relief,” she says. “I’d moved back to Wiltshire from London, because of my health circumstances and my inability to hold a day job. I was near my family. And trying to drive two and a half, three hours to rehearsal every week just became completely untenable.

“I got to the stage where touring became very difficult and I wasn’t really looking forward to it anymore. I was thinking, ‘How am I going to get through these gigs?’ With the adrenaline and the audience being amazing, it always happened. Even at the last gig that we did at Leamington Spa, I was having to hold onto the microphone stand for the first 20 minutes because I was so tired before going on stage.”

Seviour first learned she had the condition after being left exhausted from everyday life while living in London. As many do, she struggled to keep up with her employment and was forced to take a prolonged break in an attempt to recover.

“Before I was diagnosed, I was dealing with the symptoms whilst having to try to hold up a full-time job while living in London, and not knowing what was going on,” she reflects. “I got a motorbike in about 2010, a Kawasaki ER-5, and I spent the day riding it. I loved it, but I couldn’t understand why the next day I couldn’t get off the sofa – I had to call off sick. I was convinced that there had been fumes coming off the bike and poisoning me, which I knew was silly.

“I couldn’t understand why I couldn’t function. When I was at work it was taking me hours to do a simple job that would normally take 15 minutes. It was to the extent that I was going to be fired, if I hadn’t asked for time off for a sabbatical to get treatment. Trying to get diagnosed, you get blood tests, and the doctor would say there is nothing wrong with you, because there’s nothing on the screen. But I’d be coming home from work, falling asleep at half six and dragging myself out of bed for work and finding it very difficult to have a life on top of that. It was extremely hard.”

Things picked up for Seviour post-Touchstone when she was offered the chance early last year to return to the industry by Mitchell and label man Chris Hillman, who formed White Star Records and made her a top priority. They let her work at her own pace, giving her time to flourish without being pestered by the constraints and compromise that often comes with being in a group.

“Chris and John approached me and said they wanted to start a new label, and they asked me if I would like to be their first signing,” she says. “I was nervous about the pressure of doing that, because I had taken a break to give myself a rest. But they said do it in your own time, which of course is not possible in a full band, and I didn’t want to miss that chance. I thought it was an amazing opportunity.”

It gave the chance for Seviour to return to her life’s passion, singing and songwriting – the one thing that has remained with her since her childhood. It’s taken her from school concerts to prowling on stage at prog rock gigs, and has even seen her perform Sweet Child O’ Mine in front of thousands at Richard Branson’s house.

“Singing is something that I’ve always done,” she says. “Even when doing languages at my school, rather than doing just speeches and things, they’d always get me to do singing. Everything always revolved around singing.

“I joined my first band at 16, which was all very Guns N’ Roses, Santana, that kind of stuff. Then I did national karaoke competitions after that. I won a competition at my old work to sing at Richard Branson’s home, because I worked for Virgin Mobile and they had a big annual staff do, and I got up on a festival stage and performed in front of thousands. Wherever I’ve gone, singing is something that I’ve taken with me.”

Take a listen to some of the twists and turns on Recovery Is Learning and you get a taste of Seviour’s willingness to head off the beaten track. It’s subtle, but it’s there, from the rocky riffs which surreptitiously sneak in odd timings to the sparkling, incandescent keys. She is more into modern prog rather than the classic 70s fare, and there is folk in her musical make-up too, but listening to the pop-friendly nature of Recovery Is Learning you get the feeling that Seviour is a defiant advocate of accessibility and infectiousness.

“But I’m no stranger to prog – I was brought up with it,” she adds. “My dad was a massive, massive prog head, so I’ve always loved tracks like [Genesis’] Ripples, and Hocus Pocus by Focus. As well as folk, and I’m a big fan of artists like Enya as well, I’ve always liked stuff that’s just a little bit more interesting.

“One thing about prog is that it is about keeping things interesting and varied, and I really like that about it. And of course the passion for the music itself seems so different from what I see in other genres. I think because so many things started in prog – bands like Pink Floyd, they were the first band of their kind, and bands like Genesis and Tull… so many kinds of music have originated from prog, and it has influenced so many things.”

But for Seviour, music is more than just notes, melodies, harmonies and rhythms. It’s the meaning that matters, the voice that reaches beyond the music into your heart and soul. It’s a fruitful formula that has served many well over the years, and you wouldn’t bet against it working for her, too.

“I think experimenting is really important. But I think when you go into music, you have priorities in what you want from that music. For example there’s the instrumental side of it, which for me is very important, but I’m not somebody who is instrumentally very trained. I played brass instruments when I was younger, but I’m more of a vocalist and lyricist,” she says.

“I’ve been writing songs since I was a little kid, so for me it’s more about the theme of the music – what I am singing about. I’ve loved bands like Flyleaf – their music is all about empowerment and coming out of situations and learning to embrace life. That’s philosophically something I’m passionate about. Pushing boundaries of music is great, and it keeps things interesting, but for me personally it’s about what I’m singing about. That’s what I’m passionate about.”

Recovery Is Learning is out now via White Star Records. See www.facebook.com/KimSeviourMusic for more information.

What’s in a name?

With the album’s message such a key component for Seviour, what’s the meaning behind the title?

“I watched a documentary a little while ago about a psychologist or a psychotherapist who ran a mental heath clinic. People came in with all sort of mental health issues, whether it be anxiety or depression, different illnesses of that kind of ilk. He was talking about the ability to recover from them.

“It’s a very optimistic title that he uses. In his eyes, recovery is learning. It’s all about learning new ways of thinking and behaving. I really loved that phrase when I heard it.”

The singer hopes that she can use her experiences to help others as they go through similar ordeals.

“I’ve had ME now for a good five or six years, and I do have a longstanding history of anxiety and depression as well, which goes back to when I was a teenager, and it’s something that I still suffer with now. I’ve learned from having my ME, and my mindset has changed about a lot of things. A lot of decisions I’ve made in my own life enriched my own life and it helped me give advice to other people.”